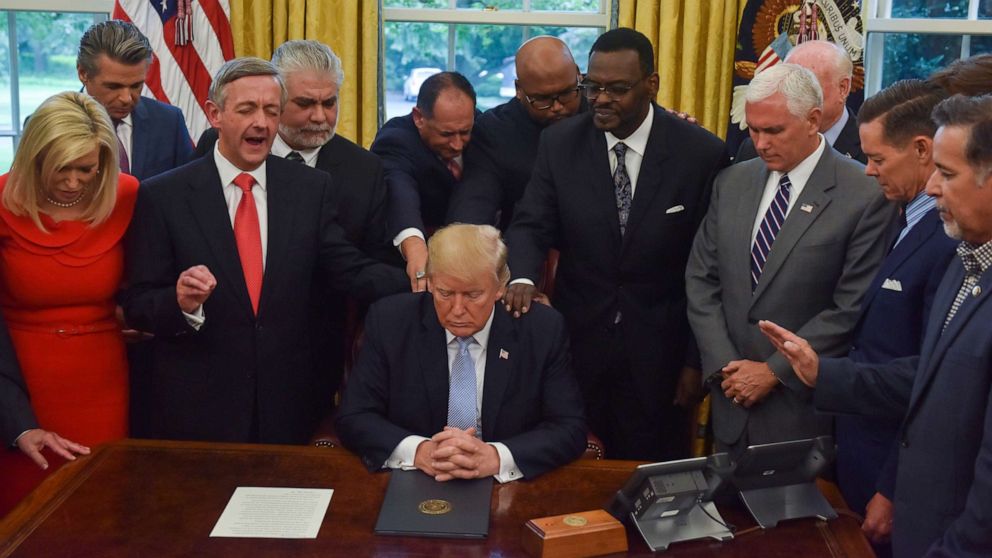 President Donald Trump on Monday defended questioning the faith of his main political rival, doubling down on calling former Vice President Joe Biden “against God” and extending his attack to Vermont Sen. Bernie Sanders — “weaponizing” religion in an apparent appeal to evangelical voters.

He appeared to be referring to policy recommendations made by a Biden and Sanders “unity task force” in July, that included proposals to combat climate change and expand health care coverage.

“You take a look at what they have in and you — you just can’t put that into the realm of a religious group of people, I will say that,” he added.

Trump said last Thursday in Ohio that Biden is “following the radical-left agenda: take away your guns, destroy your Second Amendment, no religion, no anything, hurt the Bible, hurt God.”

Biden in a statement called the comments “shameful” and insisted that his religious faith has been a “bedrock foundation” of his life.

Peter Wehner, a speechwriter in the last three Republican administrations before Trump, and a contributing opinion writer to the New York Times who identifies as a conservative and a Christian, told ABC News it’s “not a good thing” when high-profile Trump supporters have to walk back comments by the president.

That was the case on The Rush Limbaugh Show, a conservative radio program, on Monday, after Limbaugh tried to explain to a complaining Trump supporter why the president used such coarse language in calling Biden “against God.”

“It’s not hard if you have a well-rounded understanding of the Democrat Party and their hatred of modern Christianity,” Limbaugh said, claiming he knew what Trump meant. “Trump, this is one of these things, he instinctively knows it, but explaining it, he’s hampered by the fact that he does not have a lifelong immersion into politics and political language.”

Wehner said that while excusing Trump as a political outsider may have worked four years ago, that explanation is getting exhausted, as pundits and surrogates have to deal with the backlash.

“It probably turned off a lot of people, including evangelical supporters of Trump, not necessarily enough to cause them to vote against him, but I think that they probably were reflexively, instinctively, put off by it,” Wehner said.

Bishop Mariann Edgar Budde of the Episcopal Diocese of Washington, who oversees St. John’s Church near the White House where Trump had his now-infamous photo op holding up a Bible, called the attacks on Biden, a practicing Roman Catholic, “a bit of a stretch” — and said Trump’s comments illustrate a larger “social contract” he has made with many Christian voters.

“That contract assumes certain things that the president will deliver for this constituency, and in exchange for that delivering, he is given all kinds of cover for behavior that in any other circumstance, those very same Christians would be rising up in protest,” Budde told ABC News.

“My goal in this election cycle is to ask my brothers and sisters across the Christian spectrum to examine that contract, because I think the price is too high,” she said.

Budde says she only speaks out when she feels it’s “a sin not to” and emphasizes she’s not challenging the president’s identity as a Christian but challenging his behavior as a leader.

“It’s incumbent upon religious leaders — not only us but our people — across the country to say, ‘don’t go there,'” Budde said. “Talking to some of my colleagues, that is happening. I pray that it continues. But if this line of messaging gets stronger, it’s probably because there’s a sense that that’s that it’s working, for some.”

This week is far from the first time Trump has weaponized religion for political gain.

When running for president in 2016, Trump claimed his then opponent, Texas GOP Sen. Ted Cruz, a staunch conservative and practicing Southern Baptist, “holds up the Bible and then he lies about so many things.”

“He goes around saying he’s a Christian. I don’t know. You’re going to have to really study that,” Trump said at the time.

He launched similar baseless attacks on his general election opponent, former Secretary of State Hillary Clinton — who for decades has publicly discussed her faith as a Methodist — claiming in the run-up to the election, “We don’t know anything about Hillary in terms of religion.”

During his impeachment proceedings, Trump lashed out at House Speaker Nancy Pelosi’s Catholic faith and that of Sen. Mitt Romney, R-Utah, a Mormon and the only Republican to vote in favor of removing Trump from office, after the two cited faith and prayer in helping guide their decisions.

“I don’t like people who use their faith as justification for doing what they know is wrong,” Trump said at the annual National Prayer Breakfast in February, typically a non-partisan event. “Nor do I like people who say, ‘I pray for you,’ when they know that that’s not so,” referring to Pelosi saying she prayed for the president.

“She doesn’t pray. She may pray, but she prays for the opposite. But I doubt she prays at all,” Trump continued at a White House event celebrating his acquittal, calling out Pelosi and Romney by name in front of dozens of congressional leaders.

As president, Trump has surrounded himself with a group of evangelical pastors who heap praise upon him for taking socially conservative stances — but he rarely puts his own religious beliefs on display – beyond photo ops with the pastors laying hands on him and praying as he bows his head.

Trump refers to himself as Presbyterian but has attended worship services only occasionally.

He had claimed, when asked in a Bloomberg interview, that his “favorite book” is the Bible but declined to name a favorite verse he finds meaningful, calling it “very personal” and saying he didn’t “want to get into specifics.” Asked whether he was an “Old or New Testament guy,” he answered, “probably equal.”

As a candidate, Trump at a Liberty University event famously spoke of “Two Corinthians” — the Bible chapter commonly referred to as “Second Corinthians.”

The president’s estranged niece, Mary Trump, said in her book “Too Much and Never Enough” she was astounded at his evangelical support because “The only time Donald went to church was when the cameras were there.”

“It’s mind boggling. But that’s all about his base. He has no principles. None!” she writes.

Despite religious leaders like Budde calling attacks on faith “antithetical to what it means to be a follower of Jesus,” the Trump campaign, in an apparent effort to again secure the voting bloc that helped Trump win in 2016, has consistently painted Biden as disconnected from religious faith and conservative values.

Notably, Biden has often spoken publicly about the significant role his faith has played in his life, particularly during moments of tragedy. He regularly wears his late son Beau’s rosary beads on his wrist.

“Like so many people, my faith has been the bedrock foundation of my life: it’s provided me comfort in moments of loss and tragedy, it’s kept me grounded and humbled in times of triumph and joy,” Biden said in a statement last week responding to attacks on his faith. “And in this moment of darkness for our country — of pain, of division, and of sickness for so many Americans — my faith has been a guiding light for me and a constant reminder of the fundamental dignity and humanity that God has bestowed upon all of us.”

A Pew Research Center survey conducted in February found that more adult Americans view Biden as more of a religious person than Trump — with 55% of U.S. adults saying they think Biden is “very or somewhat religious” and just 35% of adults saying the same about the president.

Gregory Smith, associate director of research at Pew Research Center, said one of most striking things revealed to him in surveying public opinion data is the amount of stability in the pattern with respect to religion and politics.

Asked if the president is “weaponizing religion,” Budde expressed concern for the “unintended consequences” of invoking faith in political attacks.

“I am very worried about the harm that is being done under the mantle of a spiritual justification and it breaks my heart — because the damage that he’s done to the witness of Christianity is incalculable,” she said.

Back in 2007, leading up to his run for president, Biden predicted to ABC News’ Chief Anchor George Stephanopoulos that rivals would try to undermine his faith.

“These guys are going to suggest with me as a nominee that I’m not a man of faith, that I do not have the values that exist that are shared by the vast majority of this country,” Biden said on ABC’s “This Week.” “To use, George Bush’s phrase, bring ’em on.”

BJP complains to ECI against Kavitha

After first round of vaccine distributions, bulk of planning remains unfinished