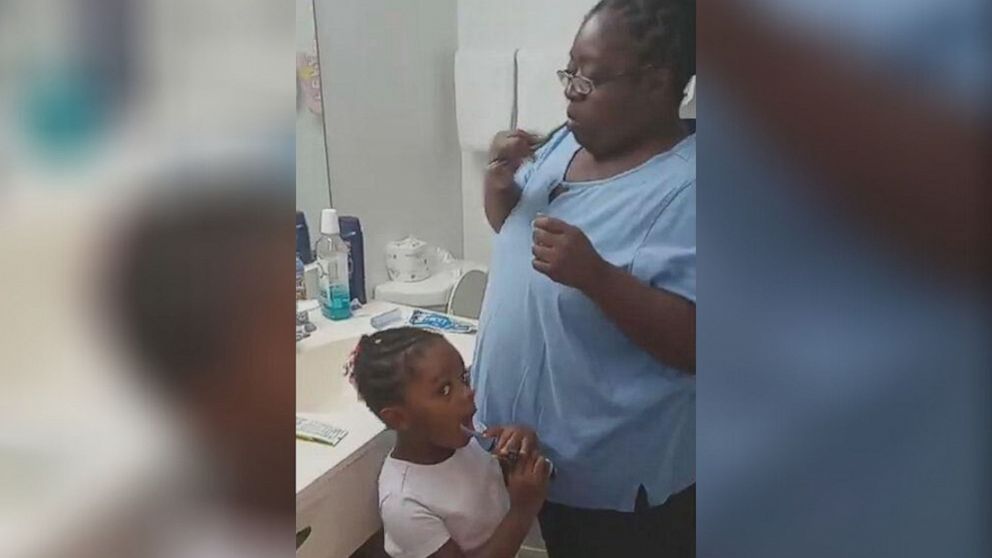 Latrish Oseko says her 4-year-old daughter Ka’laya asks a lot of questions, but one of them is particularly hard to answer: “When are we going home?”

Right now, Oseko, her boyfriend and Ka’laya are living in a motel room in Newark, Delaware. Their new situation is a result of the economic crisis and chaos stemming from the ongoing COVID-19 pandemic.

“I had to break down and say, ‘This is our home, we have to make the best of it. We have to come here every day and say our prayers,’” Oseko told “Nightline. “‘But it’s a sad thing to say to your 4-year-old. … Living in a motel is definitely less than ideal. It’s very stressful. [We’re] used to having more room and Ka’laya is used to having more room.”

Oseko lost her job in the spring as the virus forced shutdowns across the country. Government aid, like the $1,200 stimulus check and the extra $600 a week in federal unemployment aid from the Coronavirus Aid, Relief and Economic Security (CARES) Act helped keep her family afloat, helping them pay for rent, food and even emergency car repairs.

Over 30 million Americans lost the federal supplemental aid when it expired on July 31, including Oseko. Now, she’s surviving on just $300 a week in unemployment benefits provided by her state.

Piling onto Oseko’s plate, her landlord did not renew her lease and sold the house her family lived in, forcing them to move into the nearby motel two weeks ago. Without a job, it’s hard to get approval to rent a home or apartment.

Oseko has had to quickly adjust to her new routine. She wakes up with Ka’laya at 6:15 a.m., and then in their tight quarters, they run through their morning rituals to get out the door.

After leaving, Oseko drops off her boyfriend at his job at the University of Delaware and takes her daughter to daycare. It costs $150 a week, half her current unemployment payment. But she says the expense is worth it, because it provides a sense of normalcy for Ka’laya and helps free up her time to job hunt.

“Daycare is absolutely necessary for me — there’s no way around it — so I can take care of these important appointments and [job] interviews where a child can’t go,” she said.

By mid-morning, Oseko is applying for jobs on her phone. She spends her days driving around town looking for work.

Since she works in technology, she says the motel’s Wi-Fi has limited her options. She’s been offered opportunities only to lose out because they require a more secure, hardline internet connection.

“The jobs either aren’t there or the jobs I’m finding … and am getting hired for are working remotely and that’s not an option for me right now,” she said.

People of color have been disproportionately affected by unemployment during the pandemic. In July, 14.6% of Black workers, 12.9% for Latino workers and 12% of Asian American workers were unemployed, compared to 9.2% for white workers.

For Oseko, watching the debate over federal coronavirus aid in Washington, D.C. has been incredibly frustrating.

“Every day, I feel like I’m putting one foot in front of the other looking for work,” she said. “Senators, please understand that while you’re fighting, there may be a family like mine who doesn’t have a home to go to, who doesn’t have a bed to lay in at night.”

Lawmakers are still locked in a stalemate over a more permanent relief package. Some Republicans argue the $600 a week is too much, equal to a $15 hourly wage, and that some unemployed Americans are bringing in more money now than they would if they were working.

“I would love to go to work. I want to be at work,” Oseko said. “I really want to get out there and take care of my family… I don’t know why in the world someone would think that someone wants to sit home… Nothing’s fun about that.”

Last weekend, President Donald Trump signed four executive actions, which included extending unemployment benefits. As part of that, Trump ordered $400 to be paid each week to every unemployed American. However, he’s looking for already cash-strapped states to foot some part of the cost. Many governors have already said they can’t afford it.

Democrats originally proposed a solution worth considerably more, worth $3.4 trillion, which was rejected by Republicans.

Democrats and some Republicans say the president overstepped his powers, since the Constitution expressly gives Congress the power of the purse.

Lynette Hale is one of millions of Americans at the forefront at a looming housing crisis. Hale used to run a daycare center in the home she rented in Colorado, but her business quickly unraveled when the pandemic hit and parents started keeping their kids at home.

“It was just traumatizing because one [client] emailed says that they will no longer be using me,” she told ABC News last month. “Then I got the next one and then the next one. Then … they were all gone.”

Hale’s income vanished and she began using her savings to pay rent — about $2,200 a month. By July, she was tapped out.

“I’m 70 years old. I’m about to be on the street,” she said tearfully. “Maybe something good will happen, but I don’t know how much longer I can carry that on, either.”

Emily Benfer, a law professor at Wake Forest University and co-founder of Eviction Lab COVID-19 Housing Policy Scorecard, told “Nightline” the country is facing the most severe housing crisis it has ever seen.

“Approximately 30 to 40 million children and adults are facing eviction right now,” she said. “To put this in perspective, in the entire year of 2016, 3.6 million evictions were filed. So in the truncated time period of just a few months, the United States is looking at three to four times that level.”

Denver attorney Zach Neumann co-founded the COVID-19 Evictions Defense Project with other lawyers offering free legal advice. He says the ripple effect of the economic crisis is hitting landlords too.

“I don’t think landlords are the bad guy in this story at all,” Neumann said. “Landlords are running businesses. They’re trying to pay mortgages.”

Terry Shoaf is one of those landlords. She says when the pandemic hit, one of her tenants lost a job and stopped paying rent.

Shoaf says she is now at least $10,000 in debt and that her credit cards are maxed out and she worries she may lose her home.

“I’m not a big corporation. I’m a single person living on social security, with the rental income to supplement,” she told “Nightline.” “People in my position, the mom and pop landlords, are really hurting.”

Evictions can have far-reaching effects, impacting much more than a person’s address.

“It affects your credit. It affects your ability to buy a home,” Benfer said. “It’s also linked to numerous health ailments, including depression, suicidal ideation, suicide, respiratory distress… It’s particularly traumatizing for children who are set back academically.”

Back in Delaware, pressure is building for Oseko and her family.

“[My daughter]’s heard me say this before… ‘I need to do this, this and this so I can get back up on my feet,’” Oseko said. “One day she said, ‘Mommy, is it going to take you long to get back on your feet?’ And we just made a joke out of it. I explained, ‘Hopefully, not much longer.’”

While the government debates over her future and the future of over 30 million other unemployed Americans, people are reaching out to help. Oseko’s story was recently featured in her local paper and The New York Times. Thanks to an online fundraiser, she hopes to fill the gap for her family until she lands a job.

“Strangers, people that I don’t know, have reached out from all over the world,” she said. “When they leave their message that, ‘You’re a good mom, and you’re doing your best right now and it’s going to get better.’ Oh my gosh, you don”t know what that does for my self-esteem to know.”

Oseko said she tried to avoid asking for help this way. But now, she believes she’s doing everything she can for her daughter.

“I’m gonna set my pride aside and continue to tell my story wherever I can … because If there’s one of me, there’s probably five million other people going through the same, and it could be worse,” she said. “For the most part I’m hopeful that it will get better.”