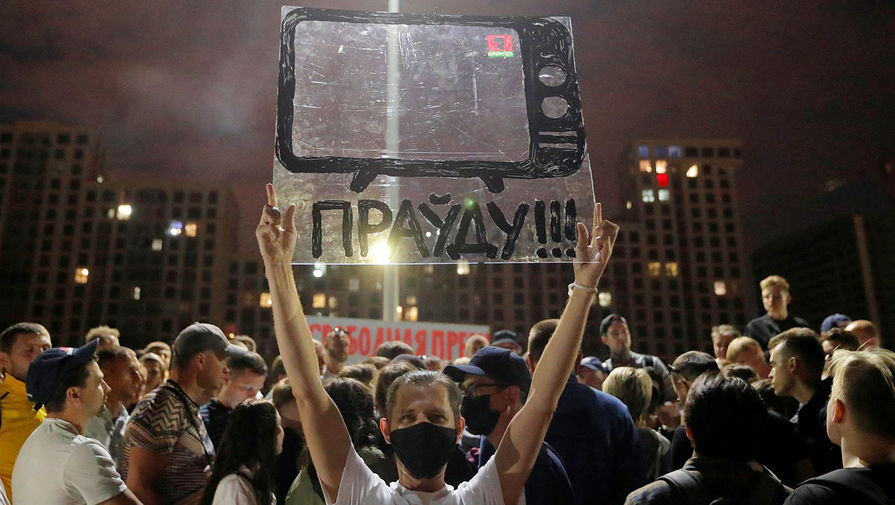 Employees of Belteleradiocompany prepared to participate in the strike, caused by the discontent of citizens of Belarus by the results of the elections, said the leader and Director of two state TV channels Natalya Bibikova. The protesters came to the building of the Belarusian state television to tell the truth about the situation in the country.

The building of the Belarusian state BTRC in Minsk held a protest against the election results. To communicate with the staff arrived, the press Secretary of the President of Belarus Natalia Eismont and the speaker of the upper chamber of the Belarusian Parliament Natalia Kochanova, the correspondent of RIA “news”. Together with them in the building of state-owned companies were the Chairman of the Union of journalists, a political commentator Andrei Krivosheyev BT.

Gathered near the building greeted them with cries of “the Truth”.

According to the Agency, the protesters also chanted: “Stop the lies”, “Tell the people the truth” and “Show Akrestsin street”. In the latter case we are talking about the detention center where detained at the protests.

As the woman said, coming out of the building, Kochanov and Eismont talk with employees of the broadcasting company. She said that about 40 of the audience ask them questions about what is happening in the country, including wondering why the public channels do not tell the truth about the situation.

It is reported that the building of BTRC sent a convoy of several hundred people who joined the people already standing there. In the hands of some of them flowers. Many carrying placards with inscriptions condemning the violence against participants of protest actions that began in the Republic after the presidential elections. Passing cars honk long.

A leading and Director of the state TV channels Belarus 1 and Belarus 3 Natalia Bibikova announced that the employees of the Belarusian TV and radio company is ready to participate in the strike. She announced this to journalists after left the meeting Natalia eysmont with employees of Belteleradiocompany. “Employees are willing to go on strike. It is difficult to say what percentage,” said Bibikov.

According to her, the strike was planned for August 17, but “the events are developing that could (begin. — “Газета.Ru”) sooner.”

In Pushkin square of Minsk at noon on August 15 held a mourning rally in memory of the dead during the protests the demonstrators.

The people gathered in the heart of the city, on Independence square.

Mass protests have swept Belarus of August 9, after the election of the President. According to the CEC, won by incumbent President Alexander Lukashenko from 80.1% of the vote. His closest competitor Svetlana Tikhanovski received about 10%. Thus, according to her staff, in fact the opposition voted 70-80% of voters.

The protesters also believe that the results of the vote were falsified. For this reason, in the country to this day do not stop the action. In the early days of the security forces suppressed them, using violence against the protesters the police used tear gas, water cannons, stun grenades, and rubber bullets. Demonstrations on 13-14 August, the majority were peaceful. 14 Aug thousands-strong protest rally was held at the government House in Minsk, where including is the CEC of Belarus. Dissatisfied with the demand to recount votes at the last election. They insist on the resignation of Lukashenko, who has ruled the country continuously since 1994. Of shares on 14 August there were no arrests.

According to the interior Ministry of Belarus, as a result of the riots, from 9 to 13 August, suffered 121 the police officer, the investigative authorities have opened over 90 criminal cases.

The shares have been detained more than 6.7 thousand participants.

The head of state believes that these protests “will not work”. “You know better than me what is happening in the country. Slowly begin or continue to shake the situation, our society. Got to labor collectives. I have said many times about this. Just want to once again say that it did not work” — said Lukashenko at a meeting in the General staff on 15 August.