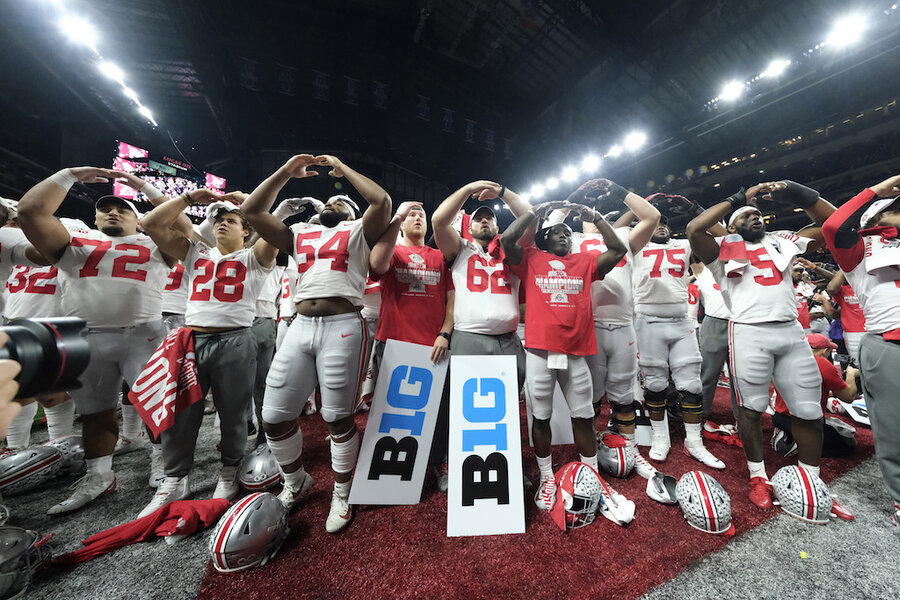 A crumbling college football season took a massive hit Tuesday when the Big Ten and Pac-12, two historic and powerful conferences, succumbed to the pandemic and canceled their fall football seasons.

Five months almost to the day after the first spikes in coronavirus cases in the United States led to the cancellation of the NCAA basketball tournaments, the still raging pandemic is tearing down another American sports institution: fall Saturdays filled with college football.

“This was an extremely difficult and painful decision that we know will have important impacts on our student-athletes, coaches, administrators, and our fans,” Pac-12 Commissioner Larry Scott said. “We know nothing will ease that.”

Despite pleas from players, coaches, and President Donald Trump in recent days to play on, 40% of major college football teams have now decided to punt on a fall season, a decision that will cost schools tens of millions of dollars and upends traditions dating back a century.

Both conferences cited the risk of trying to keep players from contracting and spreading the coronavirus when the programs are not operating in a bubble like the NBA, MLS, and NHL are doing. They also cited the broader state of the pandemic in the U.S., which has had more than 5 million cases of COVID-19.

“Every life is critical,” first-year Big Ten Commissioner Kevin Warren told the AP. “We wanted to make sure we continually, not only in our words but in our actions, do put the health and safety and wellness of our student-athletes first.”

Two smaller conferences, the Mid-American and Mountain West, had already announced the uncertain move to spring football. The decisions by the deep-pocketed Big Ten and Pac-12, with hundred million-dollar television contracts and historic programs, shook the foundation of college sports.

The Southeastern Conference and Atlantic Coast Conference released statements expressing cautious optimism. The Big 12 was quiet, but a person familiar with the conference’s discussions told The Associated Press the league was continuing to work toward playing in the fall. The person spoke on condition of anonymity because the conference was not planning to make its internal discussions public. The Big 12 has still not released its revised schedule.

Outside the Power Five conferences, the American Athletic Conference, Conference USA, and Sun Belt made no immediate moves.

“Everyone is going to make their independent decisions and I certainly respect our colleagues,” Mr. Scott said. “We try to be very collaborative, communicative with our peers across the country. But at the end of the day, our presidents and chancellors looked at what was in best interest of Pac-12 student-athletes based on the advice and frankly what’s going on in our communities.”

The Big Ten said it was postponing all fall sports and hoping to make them up in the second semester. An hour later, the Pac-12, the Big Ten’s Rose Bowl partner, said all sports would be paused until Jan. 1, including basketball.

Players around the country were stunned. Many had recently taken to social media with the hashtag #WeWanttoPlay. Ohio State star quarterback Justin Fields was among those trying to present a unified front and save their season.

After the announcement, Mr. Fields simply posted to Twitter: “smh,” short for shaking my head.

Less than a week ago, the Big Ten – which includes perennial powers such as Ohio State, Michigan, Nebraska, and Penn State – had released a revised conference-only football schedule it hoped would help it navigate a fall season filled with potential COVID-19 disruptions.

Even after the Big Ten made its call, there were diverging thoughts about how it should have proceeded.

Ohio State athletic director Gene Smith said he would have liked to have pushed back the season from Sept. 5 to maybe early October.

“Wish we could have had a little bit more time to evaluate, but we certainly understand this was the time we had to pull the plug,” Mr. Smith told the Big Ten network.

A statement from Nebraska’s president, athletic director, and coach was more stern: “We are very disappointed in the decision by the Big Ten Conference to postpone the fall football season, as we have been and continue to be ready to play.”

Nebraska coach Scott Frost and Ohio State coach Ryan Day had both suggested Monday that if the Big Ten did not play their schools might look elsewhere for games.

In the Pac-12, where Southern California, Oregon, Washington, and Stanford have won championships in recent years, there seemed to more consensus.

“We feel good about our decision,” Oregon President Michael Schill said. “We would have made this decision independent of the Big Ten. We respect the institutions in the Big Ten. Many of them have the same values we have. We’re pleased they are joining us.”

The cost of losing football will be devastating to athletic departments. The Big Ten distributed more than $50 million to most of its members in 2018, but most of that came from media rights deals and a conference TV network powered by football. Maybe some can be recouped in the spring, but there are bills to pay now.

Wisconsin of the Big Ten has estimated $100 million in losses with no football at all. Michigan said it could be in the red more than that.

“We do have a reserve that will take us so far, but we’re going to have to have some layoffs,” Wisconsin athletic director Barry Alvarez said. “There will be some of our units that won’t be working. Those are things we have a plan for. Those are very difficult decisions to make.”

Over the last month, conferences had been reworking schedules in the hopes of being able to buy time and play a season. The Big Ten was the first to settle on conference-only play, in early July, and all the Power Five conferences eventually switched to either all or mostly conference play.

The idea behind it was to create flexibility to deal with the possibility of having to cancel or reschedule games because of COVID-19 outbreaks, like the ones that have hit Major League Baseball.

It also created an every-conference-for-itself atmosphere that could now lead to two college football seasons – one in the fall and one in the spring. Or maybe none at all.

The NFL scouting combine is in late February and the draft is in late April. If the NFL does nothing to accommodate spring college football some of the sure-things are almost certain to leave. The players who needed another year of tape to improve their stock might be more inclined to stay and play. But an injury in the spring could be an even bigger problem when it comes time to earn a spot on an NFL roster in the summer.

Maybe players will still try to play in the fall, but in another conference. The Southeastern Conference, Atlantic Coast Conference, Big 12, American Athletic Conference, Conference USA, and Sun Belt are all still on track to start their seasons in September.

With a few weeks to go before classes start at most schools, there is still time for a player to transfer, apply for a waiver from the NCAA, and be eligible by opening day.