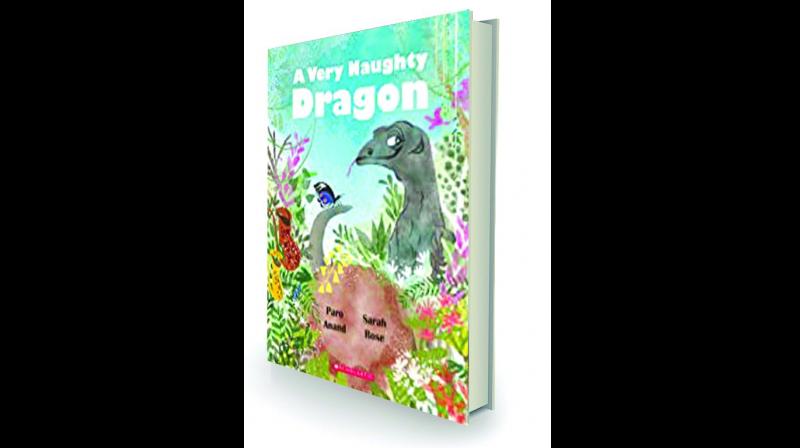 Sometimes the writing of a book is a deliberate process. But sometimes, it is the dance of chance that births it. A Very Naughty Dragon (Scholastic India) by Paro Anand and Sarah Rose is one such. It came out of the thin winter air last year.

A book I had written (A Very Naughty Bear, Scholastic India) had proved to be quite a little hit. The publisher and I met at a literary event and we thought this may make for an interesting series. The idea being that different animals would feature in each title. My dear friend, Jaya Bhattacharji Rose’s 9-year-old daughter, a voracious reader who accompanies her mother to as many literary events as she can, was also present. And chance made her move.

I turned to Sarah Rose and asked her which animal I should feature in the next book. Her immediate response was, “Komodo Dragon”. Unusual choice for a kid, right? But that’s Sarah for you. I told her that while the dragons fascinated me, I didn’t know enough about them to launch into a book. Promptly, she replied, “I am good at research and you are good at writing.” And just like that, a collaboration was born. We exchanged matching notebooks — Scholastic India had given out these notebooks with Siddhartha Sarma’s tenth anniversary edition cover of The Grasshopper’s Run. And Sarah and I were off.

Sarah buried herself in dragon facts. And shot them at me. She came over to my house, gave me enough fodder to get started and disappeared to play with my dogs and rabbits.

I thought that it was now my turn to take over the reins. Nothing of the sort. Sarah had ideas and opinions on the stories (we’d initially decided on three dragon stories in keeping with the Bear book). Her ideas were so unexpected that we had to write a fourth story. Like the human character Lavender Blue being a Papua New Guinean. Who would have thought, right? Not an answer you’d expect from a 9-year-old! Over meetings and Skype and inter-city phone calls, we had so much fun. Like the dragon being named Draco because his father loved the character from Harry Potter. He’d sneakily watched it while it was being screened in a village. But perhaps, the most original was Sarah’s idea that Draco would eat up his very naggy parents. I had to sadly edit that out because it would alarm parents. You know how they are, they think kids will do anything they’ve read in a book!

A year later, with fabulous illustrations by S.M. Studio, our labour of love and fun was born. Chance continued her dance. A Very Naughty Dragon is the showpiece to celebrate Scholastic India’s 22 years in India. It also marks the 100-year celebrations of Scholastic Inc., established in New York in 1920.

Our book is sweet and fun. But it is also a strong book of co-operation and hope and friendship between those you may not expect to be friends. An important, subliminal note for our times. One that children need to be reminded of.

And so, chance danced as an avid young reader was born into a writer. An oldie like me got a brand-new experience. And a 100-year-old publisher that has a strong belief in mentorship took the leap.

And I think a Star was born.

The second gentleman of USA