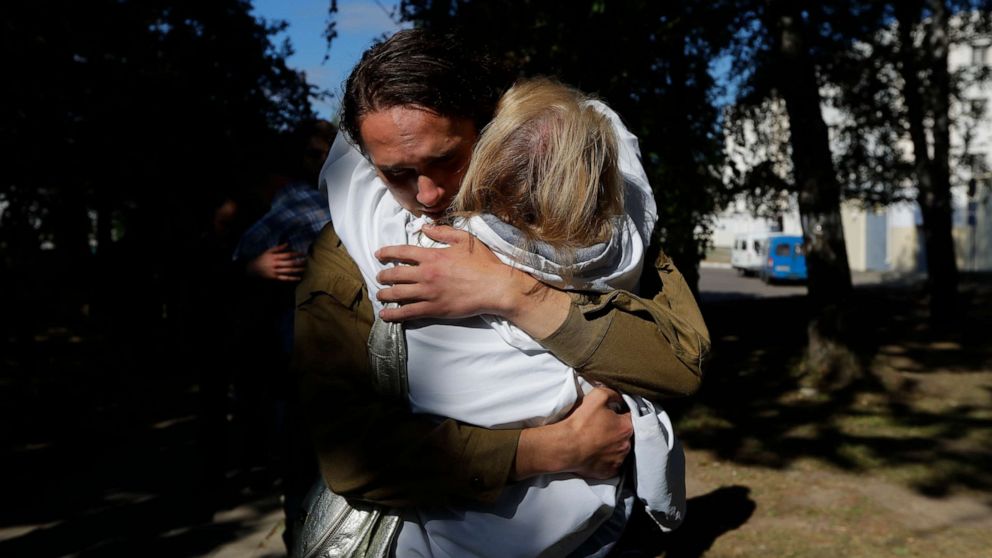 People emerging from jails in Belarus after being detained during the protests there in the past few days have described brutal treatment, including torture, by guards and police, painting a picture of systematic terror by president Alexander Lukashenko’s security forces targeting thousands of people during a crackdown.

Belarus’ security forces said they have detained around 7,000 people since last Sunday’s contested election that triggered protests in the former Soviet country. Those detained have told media, including ABC News, of witnessing organized beatings, and people kept for days without food and threatened with rape. Detainees have described being kept in overcrowded cells, in some cases 30 people or more packed into cells designed for two to six.

Alina Beresneva, 20, told ABC News she was picked up by police on the first night of protests shortly after Sunday’s election results were declared giving Lukashenko a landslide amid widespread allegations of ballot rigging.

Beresneva said she and friends had stopped near the protest while coming home, surprised by the lines of riot police in central Minsk.

She said she was grabbed by police even though she wasn’t part of the protest, as they were detaining many passersby as well as demonstrators. She was taken to Minsk’s Okrestina detention center, from where multiple other accounts of abuse have since emerged.

Beresneva said when she arrived there were already many detainees there and guards were screaming derogatory terms at them as they entered. She said guards forced several women to hand over their underwear and they were placed inside a cell meant for three with 13 other women. Beresneva was later moved, she said, to another cell that held 30 women in a cell intended for six.

From the first cell’s window, she said she watched a group of male detainees being forced to kneel together.

“They were practically naked, on their knees in their underwear. If they budged they were hit with sticks,” she told ABC News by phone on Monday.

At the start of her detention, she said the women had asked to see a lawyer.

“They said, ‘You’ve been watching too many American films. This is very different.'”

Beresneva said after two days without food, guards came around forcing people to sign statements they were not allowed to read. She said she could hear screams and people being hit as the guards went around the cells.

She said when it came to her turn, the guard threatened to rape her if she didn’t sign. She was eventually taken to a court, having spent three days without food, and received a fine of around $200, and was released.

As protests continued to swell on Thursday night, Belarusian authorities began releasing hundreds of detainees and the interior ministry issued an apology to those who might have been “accidentally” detained.

“I want to apologize to the accidental passersby who were arrested. We are trying to release them as quickly as possible — staff are working through the night for that instead of sleeping,” interior minister Yuri Karayev said in an interview with the TV station ONT.

Many of those emerging from jail had severe bruising on their faces and other parts of their bodies, and told similar stories to journalists of constant beatings, of people being stripped and threatened with rape.

Olesya Stogova, a Russian citizen in her 30s, told AFP she had been kicked and beaten with truncheons.

“We’ll do whatever we want. We’ll leave you disfigured — you won’t recognize yourself,” she said guards told her.

Vartan Grigoryan, another freed detainee, with a huge bruise concealing one eye, spoke to Reuters outside a prison.

“I was seized, beaten, taken to prison and beaten again,” he said.

For days, people had been gathering outside jails looking for loved ones who had disappeared during the protests overnight. Audio and video recorded outside a jail, seemed to pick up the sounds of screams and moans coming from inside.

Nikita Telizhenko, a journalist with the popular Russian website Znak wrote an account of his own experiences after being detained in Minsk on Monday and released later this week. He described arriving at a jail where dozens of people had been forced to lie face down on the ground, some of them already apparently badly injured from the violence on the street.

“And all around the terrible beatings were going on: from everywhere you could hear the sounds of blows, cries, wailing,” he wrote. “And I understood there was nowhere to lie down, all around people were lying in pools of blood.”

Another journalist, Igor Rogov, who was hospitalized after he was released to the Russian embassy this week, described also being forced to lie all night face down on the ground outside a jail and being clubbed frequently, in interviews with Russian media. He said he had suffered a fractured skull. Some detainees were so badly injured that after they were released they had to be immediately loaded into ambulances, video at the scene showed and as reported by AFP and other outlets.

“Former detainees told us that detention centres have become torture chambers, where protesters are forced to lie in the dirt while police kick and beat them with truncheons,” said Marie Struthers, Amnesty International’s director for Eastern Europe and Central Asia. “They described being stripped naked and subjected to sadistic beatings while listening to the screams of other victims.”

Police have used extreme violence from the start against the protesters, using stun grenades, rubber bullets and video has shown them clubbing people indiscriminately.

Hundreds have been injured and at least two have died, according to authorities. The second death was that of Alexander Vikhor, a 25-year-old who died in police custody in the city of Gomel, his family told local media.

By Friday, authorities said they had released 2,000 detainees, despite a deputy interior minister’s promise to release everyone by 6 a.m., but based on the official count thousands remain in detention. Despite the crackdown, protests have continued to grow in Belarus, with thousands of people demonstrating across the country and strikes reportedly spreading to some of the country’s biggest manufacturing plants.