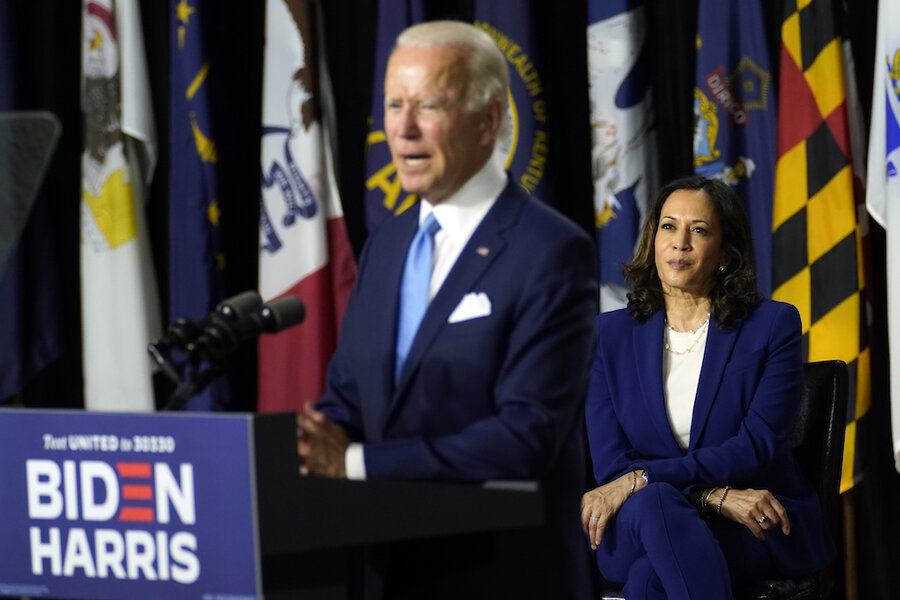 Joe Biden and Kamala Harris pushed past their one-time political rivalry to deliver an aggressive attack on the character and performance of President Donald Trump in their historic first appearance as running mates.

The physical debut of the Democratic ticket on Wednesday was without parallel in recent political annals. The coronavirus prevented Mr. Biden and Ms. Harris from appearing before the large, adoring crowd that typically greets a presidential nominee and his or her running mate. Instead, they spoke in a mostly empty high school gym where reporters nearly outnumbered campaign aides and the candidates’ family members.

While the pandemic made a traditional campaign rollout impossible, it gave Mr. Biden and Ms. Harris a setting to emphasize their criticism of Mr. Trump as unable to contend with the most severe public health crisis in a century. Ms. Harris was particularly sharp in her condemnation of the administration.

“The case against Donald Trump and Mike Pence is open and shut,” Ms. Harris said. “This virus has impacted almost every country. But there’s a reason it has hit America worse than any other advanced nation. It’s because of Trump’s failure to take it seriously from the start.”

She added: “This is what happens when we elect a guy who just isn’t up for the job.”

Ms. Harris is the first Black woman on a major party’s presidential ticket, and she and Mr. Biden noted the historical significance.

“This morning, all across the nation, little girls woke up – especially little Black and brown girls, who so often feel overlooked and undervalued in their communities. But today, today, just maybe, they’re seeing themselves for the first time in a new way,” Mr. Biden said.

Ms. Harris, who is also of South Asian descent, noted the “heroic and ambitious women before me, whose sacrifice, determination, and resilience make my presence here today even possible.”

For his part, Mr. Trump has struggled to land on a coherent message about the Biden-Harris ticket, casting the Democrats as simultaneously too liberal for America and yet not progressive enough for their party’s base. Mr. Trump has resorted to sexist and racist criticism, referring to Ms. Harris as “nasty” and tweeting that “the ‘suburban housewife’ will be voting for me” to keep neighborhoods safe.

He also noted the two Democrats’ disagreements during the primary campaign last year.

“She said horrible things about him,” Mr. Trump said Wednesday. “She mocked him, openly mocked him. That’s why I thought that was a very risky pick. Because I’m sure that will be played back.”

But onstage in Wilmington, Mr. Biden and Ms. Harris showed clear affection toward one another. He called his running mate an “honorary Biden,” and Ms. Harris offered a poignant tribute to his son Beau, whom she was friends with when both served as state attorneys general. Mr. Biden seemed overcome with emotion as Ms. Harris spoke of Beau, who died in 2015, as “the best of us” and a man who modeled himself after his father.

She signaled that she’ll offer a vigorous defense of Mr. Biden’s qualifications on issues of race and civil rights, though she made headlines for assailing him for his past opposition to federally mandated busing during a primary debate.

Noting Mr. Biden’s own vice presidency under President Barack Obama, she said he “takes his place in the ongoing story of America’s march toward equality and justice” as the only person “who’s served alongside the first Black president and has chosen the first Black woman as his running mate.”

Mr. Biden’s choice of Ms. Harris brought more than just historical weight to the ticket – it also provided a big fundraising boost for the campaign. He announced at a later online fundraiser that the campaign raised $26 million in the 24 hours since she was announced, with 150,000 people giving for the first time.

Still, the day was not without its challenges. The main event started an hour late, and the gymnasium in which the candidates spoke lost its air conditioning after a power outage hit the area. While most of the cable news networks took the event live, the online livestream cut out just a few minutes into Mr. Biden’s remarks.

The appearance was the first in a rollout that Mr. Biden aides say blends the historic nature of Ms. Harris’ selection with the realities of the 2020 campaign and the gravity of the nation’s circumstances, which include the pandemic and its dramatic economic fallout.

Ms. Harris was considered a favorite throughout Mr. Biden’s search, and she’s been a regular surrogate campaigner and fundraiser for him since he became the presumptive nominee.

They’ll nonetheless have to paper over differences exposed during the primary campaign, from Ms. Harris’ initial support for a single-payer health insurance system and the Green New Deal to her deeply personal debate-stage broadside against Mr. Biden over his opposition to federally mandated busing to integrate public schools in the 1970s.

Ms. Harris no longer supports a single-payer health insurance system, aligning instead with Mr. Biden’s proposal to add a public insurance option to compete alongside private plans. Still, she memorably raised her hand during one Democratic primary debate when candidates were asked whether they could back a system that scrapped private health insurance altogether.

She has broadly endorsed the Green New Deal, progressives’ most ambitious set of proposals to combat climate change, but she didn’t make that an anchor of her presidential bid. Mr. Biden has moved left on his climate proposals during the 2020 campaign but has not fully embraced the Green New Deal.

In Washington, Ms. Harris has advocated overhauling the criminal justice system, intensifying her efforts since George Floyd’s killing by a white Minneapolis police officer in May. And she’s called for sweeping domestic programs to benefit the working and middle class. But she has taken heat for some of her aggressive stances as a local prosecutor in the San Francisco area and for not prosecuting bank executives in the wake of the 2008 financial collapse.

Mr. Biden bets that, on balance, Ms. Harris has broad appeal that will shore up any weaknesses with Black women, an anchor of the Democratic Party, and other voters of color, while juicing turnout among white liberals and coaxing support from independents and Republican-leaning white voters who have soured on Mr. Trump.