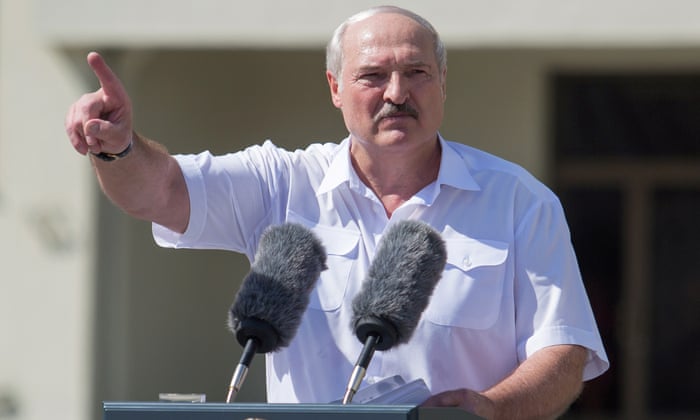 Isolated from the west and besieged by mass protests, the Belarusian leader Alexander Lukashenko has made repeated calls for Vladimir Putin to intervene and save his 26-year-old regime.

In telephone calls to the Kremlin on Saturday and Sunday, he sought confirmation that Russia would provide military assistance against external threats, while warning supporters that the country was under foreign pressure.

“Lithuania, Latvia, Poland and our native Ukraine, their leadership are ordering us to hold new elections,” Lukashenko said in a speech. “If we follow their lead, we will go into a tailspin … we will perish as a people, as a state, as a nation.”

In a statement, the Kremlin said Moscow stood ready to provide help in accordance with a collective military pact. It also said Belarus was under external pressure, without naming the source.

But Putin has stopped short of offering support or an endorsement of Lukashenko, who is facing the gravest crisis of his career. It is likely that Moscow will wait and see whether Lukashenko can survive the next weeks or even days, as protests and labour strikes grow and pressure mounts on him to leave office.

“Now it’s clear that Lukashenko’s era is over, and I think that’s clear for everyone in Moscow, including in the Kremlin,” said Dmitry Suslov, a professor and foreign affairs expert at Moscow’s Higher School of Economics.

Even if the Belarusian leader does limp through this crisis, Suslov said, his model of president-for-life probably will not. People around Lukashenko are reported to have already sounded out the Kremlin on fleeing to Russia if he is deposed, according to a Bloomberg report.

The images of popular revolution in another post-Soviet nation have evoked nervous comparisons to Russia’s intervention in Ukraine in 2014. Others have looked back to Soviet-era crackdowns. Andrej Babiš, the prime minister of the Czech Republic, tweeted on Sunday: “What happened to us in 1968 must not happen in Belarus. The European Union must act.”

Analysts told the Guardian that a Russian military intervention was very unlikely because Belarus appeared unified against Lukashenko, there was no foothold or wedge issue for Russia to exploit as in Crimea, and an armed intervention could backfire, turning a protest against Lukashenko into one against Putin too.

“There is no way for Russia to influence the internal situation in Belarus in a way that it would be peacefully resolved. That’s for Lukashenko to do it himself,” said Suslov.

Protests against the government have focused on the excesses of the Lukashenko government, in particular the torture of jailed protesters following last week’s rigged elections. An estimated 200,000 opponents of Lukashenko flooded downtown Minsk on Sunday in a wave of red and white, the colours of the pre-Lukashenko flag.

“Russia is not at all a topic of these protests,” said Vadim Mojeiko, of the Belarusian Institute for Strategic Studies, noting that opposition candidates also avoided topics such as EU integration. “These are protests against Lukashenko. It’s not pro-Russia or pro-Europe.”

Mojeiko said the public in Belarus was doubtful that Russia, which tends to favour winners, would intervene on behalf of a failing dictator who appeared likely to lose his power. “It looks like a bluff and nobody believes him,” he said of Lukashenko’s calls to Putin.

Sceptics of a Russian intervention have also pointed to the 2018 Armenian revolution, when the protest leader turned PM Nikol Pashinyan earned Moscow’s support by pledging to strengthen political and military ties with Moscow.

Belarus is different in its own way. The country lacks the exploitable divisions of Ukraine, and the Kremlin recognises that there are few advocates for an intervention besides Lukashenko himself.

But Belarus is seen as a crucial ally for the Kremlin, a country that many Russians believe shares a common culture and history, and one whose economy and military is closely intertwined with Russia’s. It also shares a direct border with Russia and three Nato states, making its trajectory a question of national security.

“There’s nowhere else in the former Soviet space that has the same significance for Russia that Belarus does,” said Nigel Gould-Davies, a former British ambassador to Belarus now at the International Institute for Strategic Studies. “Russia is deeply interested in this. It’s not on the sidelines. You can be sure that Putin, insofar as he can, wants to control or at least influence the outcome. And it’s no longer about Lukashenko the individual, but about the country.” 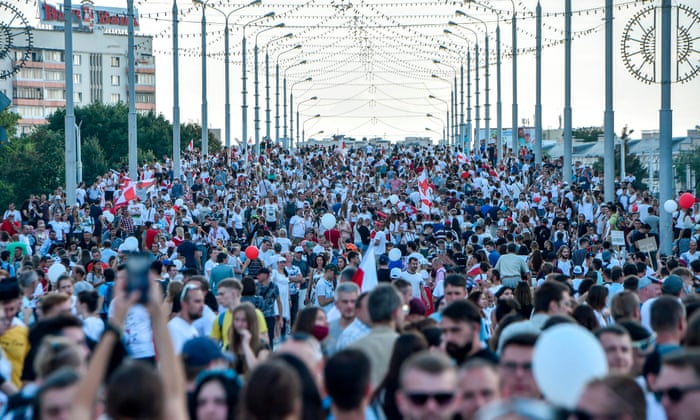 If Lukashenko does survive this crisis, Russia will probably pressure him to accept further economic integration into the union state. If not then there are concerns in Moscow about what could turn into “political chaos”.

“It doesn’t seem that [the opposition presidential candidate, Sviatlana] Tikhanovskaya can be a serious figure,” said Fyodor Lukyanov, a prominent Russian foreign policy analyst. “There are no alternatives now, so political chaos will be inevitable.”

The key interest for Russia that could trigger an intervention, he said, was “geopolitical orientation, any institutional move toward western institutions. I don’t believe it will be acceptable to Moscow in any form”.

Suslov concluded that Tikhanovskaya fleeing Belarus for Lithuania, an EU state, could make Moscow nervous. While Russia’s remarks confirming military support for Belarus appeared not to be targeted at the issue of protesters, it could be seen as a swipe at foreign countries. “I saw it as deterrence,” said Suslov.

The crisis in Belarus has developed at a scorching pace and some analysts said Putin had misjudged the momentum of the protests.

“Putin has been surprised, perhaps no less than Lukashenko himself, about what’s happened,” said Gould-Davis. “And they don’t know how to effectively respond to a rapidly changing and inherently unpredictable situation. No one does. But they will want to control it.”