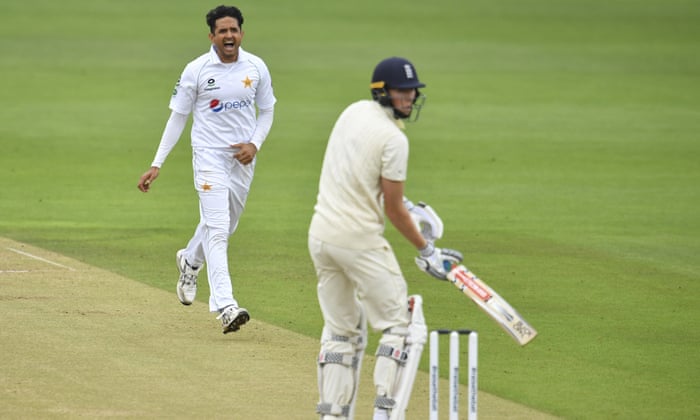 There was a sadistic pleasure to be had for an old pro from the brief moments of play at the Rose Bowl on Sunday. At the start of the England innings every other delivery seemed unplayable. The floodlights reflected brightly on the shiny, wine-dark Dukes ball and the pitch retained sufficient moisture to provide the most treacherous stage for opening batsmen.

The ball swung in the air for Shaheen Afridi, then it kissed the turf and decided to change direction; Mohammad Abbas, wobbling the seam down the track in the modern way, appeared to be bowling fast leg-breaks.

From the sofa this was mesmerising entertainment. Every delivery was a potential grenade and during the five overs of the English innings the Pakistan bowlers allowed no respite. Looking on felt like a guilty, voyeuristic delight.

This was no time to be an opening batsman; in fact throughout this summer opening the innings has been a precarious pursuit for Englishmen. Already there have been four ducks: two for Dom Sibley, one for Rory Burns, one, perversely, for Jos Buttler.

There was not much that Burns could do with the delivery he received from Afridi on Sunday; he needed the good fortune to miss it but the ball was pitched too full. It was quite a good duck. Whoever was batting, every delivery looked as if it might be his last.

As the ball was behaving so malevolently the cameras switched quickly to the England balcony, first to Zak Crawley when he was the next man in, then to Joe Root after Burns’ dismissal.

Both are phlegmatic individuals but it is fair to say that a certain amount of concern was etched on their faces.

From their vantage point they could see the ball thudding into Sibley’s hip or darting past the bat and over the top of the stumps into the expectant hands of Mohammad Rizwan. If they were curious they could glimpse at the replays on the TV screen in the dressing room for more ghoulish details. Suddenly Pakistan’s 236 looked like a very good score.

Crawley did not have to watch for long; nor did Root since the rain returned so they were spared too much torment. As the next man in, a constant, careful perusal of the bat being beaten can be counterproductive. My memory was jogged: a Somerset dressing room of about four decades ago, a dank, dreary day and the ball jagging all over the place with our openers hitting fresh air. No 3 was the great Viv Richards. He watched half a dozen deliveries to assess conditions; then he retreated to the back of the dressing room and watched no more.

He did not want to clutter his mind with any more images of a deviously moving ball beating the bat. So when he went out to bat he played what he saw rather than what he remembered and then, magically, the ball often seemed to be on its best behaviour when he was on strike.

Cricket can be the most captivating spectacle when the ball is misbehaving, with every delivery suggesting melodrama, but there is a balance to be struck.

The five overs received by England’s batsmen – as well as those delivered to the Pakistan tail – were perilous. Too often that is also the case in early April on a green, moist surface when the balance is too much in favour of the bowlers.

In such circumstances a legitimate response for batsmen can be to swing and hope; classic Test-match survival techniques may be dismissed as impractical – because it feels as if an impossible delivery is just around the corner. And so the game is diminished. It would have been fascinating to see how England’s batsmen responded to the testing conditions. But the weather won once more.