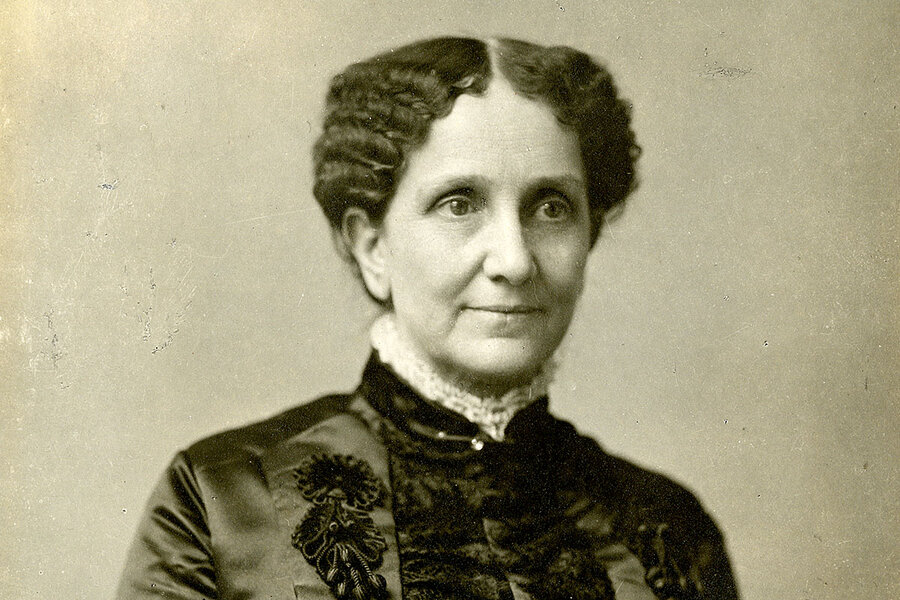 When Monitor editors asked readers to identify women who challenged what society said was possible, several thought of Mary Baker Eddy. We did, too.

The founder of The Church of Christ, Scientist and this newspaper experienced firsthand the massive inequities that confronted 19th-century American women. None, of course, could vote. Once they married, women had little or no control over their money, their property, and even their children.

The Monitor made its debut on Nov. 25, 1908. The Boston Herald, in welcoming the new publication, said starting a paper was something that “usually tests the courage and resources of the bravest … souls.” In joining that elite group, Eddy pierced a significant barrier. But she went further, rejecting the sensational journalism of the day and establishing a new standard for news aimed at credibly uplifting human thinking about the world and advancing humankind. The object, she said, was “to injure no man, but to bless all mankind.”

Below are some of our readers’ responses about other women they found noteworthy. Their replies have been lightly edited for length and clarity.

“A woman to admire indeed.”

My friend, Lisa Roy, has consistently defied expectations of what a Black woman can do in a culture where people of color – and especially women of color – are stifled, silenced, and denied opportunities because of bigotry and racism. We met as teenagers when she was an 18-year-old assistant manager at Häagen-Dazs, teaching herself to do bookkeeping. She has now established herself as a leader in her chosen field, from running nonprofits to fundraising to working in philanthropy for decades to improving educational systems for children. I know that these are huge accomplishments, but she is also generous, thoughtful, and willing to be a friend to those around her. A woman to admire indeed. – Deb Miller, Denver

“Through encouragement she persevered”

I think of Marty K. Casey, a woman I met through a women’s entrepreneur organization. She founded the nonprofit Show Me Arts Academy in St. Louis to introduce underprivileged children to the arts. She didn’t start out having all she needed and possibly would have been considered an at-risk youth herself. She has an incredible singing voice and through encouragement she persevered, changed her attitude, and has blessed her community. – Jenny Grace Morris, St. Louis

“That female child is an executive.”

I became an unwed mother at 19 in 1970. After I decided to keep my child, my mother helped me in many ways and gave me the strength I needed. I was worried about having the resources I needed, since I grew up in a middle-class family. In middle school I was told I could be a teacher, nurse, or secretary. I went on to get a master’s degree from one of our country’s finest schools, the University of Pennsylvania. Later, I went on to become a well-paid IT consultant. Today that female child is an executive. – Kay Roberts, Medford, New Jersey

Tiny, smart, loving, and resilient, my grandmother was widowed with two small children, worked to support them, remarried in World War II, lost her son and second husband to the war, kept her business going despite a radical surgery, and is an icon to me. My father had only one child, and he raised me to be his son and daughter. So I often did not see gender barriers, because I did not expect to see them. I have succeeded because of the love, unbounded by gender discrimination, that these two gave. – Jill, Manila, Philippines

When I was studying nomadic societies in college, I found their lifestyle so interesting and important for humanity and for the future of our planet. I told my sister, “I’m going to become more like a nomad.” I went and learned from nomads in Mongolia, Niger, and now in southern Africa. In the process, I discovered how to live without property (an anathema at times for a 40-year-old woman). – Julie Snorek, Hanover, New Hampshire

My mother, Marguerite Bridget Gallagher, was born in 1913 in St. James, Beaver Island, an archipelago of Irish diaspora in the middle of Lake Michigan. The first of her family of five siblings to leave the island and the only one to gain a college education, she followed my dad, a naval officer, to Long Beach, California, during World War II. She was hired as a special assistant to the commander of the naval department responsible for the top-secret codes governing fleet movements in the South Pacific. Following the war, she raised three sons and ultimately settled into a newspaper publishing career. It was quite a career for a woman whose family begged her not to leave the security of their island. – Gregory P. Smith, Traverse City, Michigan

“Defied social norms for women in the 19th century”

My grandmother, Kate Pellette Siess, was born in 1893 and defied social norms for women in the 19th century. She was a fisherwoman, well known at a lake in Canada for her big catches. And she was a ballet dancer in Paris with her sister. During the Great Depression, she was entering a bank to cash a check when a man with a gun stopped her to rob her of her money. She told him she had to cash a check and would be back, and left the bank by another door. – Katie Sue Brown, Fort Wayne, Indiana