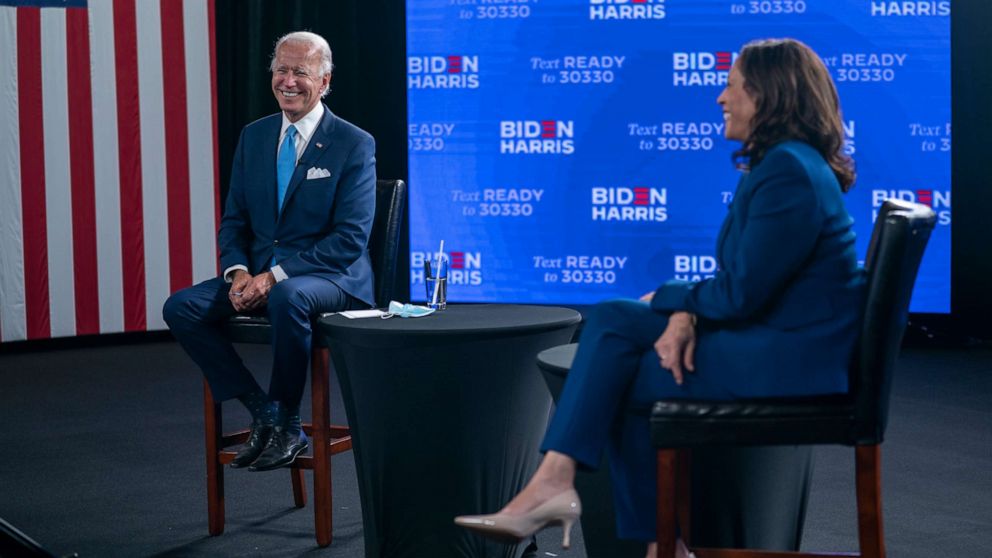 In an alternative political reality, the deep fissures exposed by a bruising primary would be in desperate need of healing as the Democratic National Convention begins Monday.

In this world, Democrats need excitement more than unity, amid signs that they’re getting tastes of both. Threats to the process of voting itself are underscoring the urgency of the moment — and a strong running-mate rollout is helping bring Democrats together, at least for now.

Biden holds a 53-41 edge over President Donald Trump among registered voters, and a 54-44 advantage among likely voters. Harris is viewed more favorably than any of the three men on the national tickets.

The Biden campaign is hoping the convention’s first night showcases the potential breadth of the Democrats’ coalition this year. From left to right, Monday’s speakers will include Sen. Bernie Sanders and former Gov. John Kasich, with former first lady Michelle Obama topping off the night.

In the new poll, Trump still holds a 17-point edge among those who say they are strongly enthusiastic to support their chosen candidate. But that gap was 35 points in late May and 30 points in mid-July, with Harris’ selection appearing to help in that department.

There are bound to be moments this week that remind voters of everything Biden and Harris are not, starting with a platform that some progressives feel is less than ideal.

This convention is designed to be far more about Biden and Harris than about Trump. But by threatening to hold up funding to support the very process of voting, the president is continuing to remind Democrats of what’s at stake.

It’s one of few government services explicitly outlined and prioritized in the Constitution. Article 1, Section 8, of the country’s founding document gives Congress the power to establish post offices.

Now with the US Postal Service facing a threat, real or perceived, Democrats in Congress are circling the wagons, shouting from rooftops, and publicly going to bat for the public agency and Americans’ right to mail.

It’s a right that feels ever more crucial to this democracy during the COVID-19 pandemic, when a record number of voters are looking to send in a ballot versus visit a polling booth in person.

The president’s own admission that he saw a political advantage in hamstringing mailing has left many shell-shocked and called to action.

Over the weekend, concerned voters protested in front of Postmaster General Louis DeJoy’s Washington residence. Democrats decried mounting evidence that mailboxes and mail processing equipment had been removed or dismantled in several states.

Though representatives from the White House and the post office have said such changes would stop, Democrats seem far from satisfied. House members have called for an emergency hearing next week where they expect to hear from DeJoy and press questions about delays in service and possible White House interference.

Conventions might be known for pomp and circumstance, but officials will also get down to business. The purpose of the quadrennial event is to formally nominate the party’s candidate and finalize the party’s platform — a blueprint of the party’s goals and vision for the next four years.

Officials are set this week to announce the final votes on the ballot, which includes the party’s platform and rules. After nearly two weeks of remote voting all prior to the convention, the platform is expected to be approved by the more than 4,700 delegates — despite some dissent from the progressive wing of the party over the single nod to Medicare for All and not a full embrace. But even their de facto leader, Sen. Bernie Sanders, voted “yes” on the platform.

This year’s convention is entirely centered around the theme of unity, after the raucous displays of acrimony in 2016. Heading into Monday, the former presidential contender attempted to assuage concerns about the divisions lingering just under the surface within his liberal base.

“The overwhelming majority of progressives understand that it is absolutely imperative that Donald Trump be defeated,” Sanders said on ABC’s “This Week” on the eve of the convention.

“World News Tonight” Anchor David Muir will sit down for the first joint interview with Biden and Harris in a one-hour primetime special that will also feature “Good Morning America” co-anchor Robin Roberts talking with the pair about the history-making ticket. The exclusive interviews will air in a one-hour primetime special, Sunday, August 23 at 8 p.m.

And just 14% of Americans say the coronavirus pandemic is under control, according to the latest ABC News/Washington Post poll out Monday. Two-thirds of poll respondents also say the economy is in bad shape.