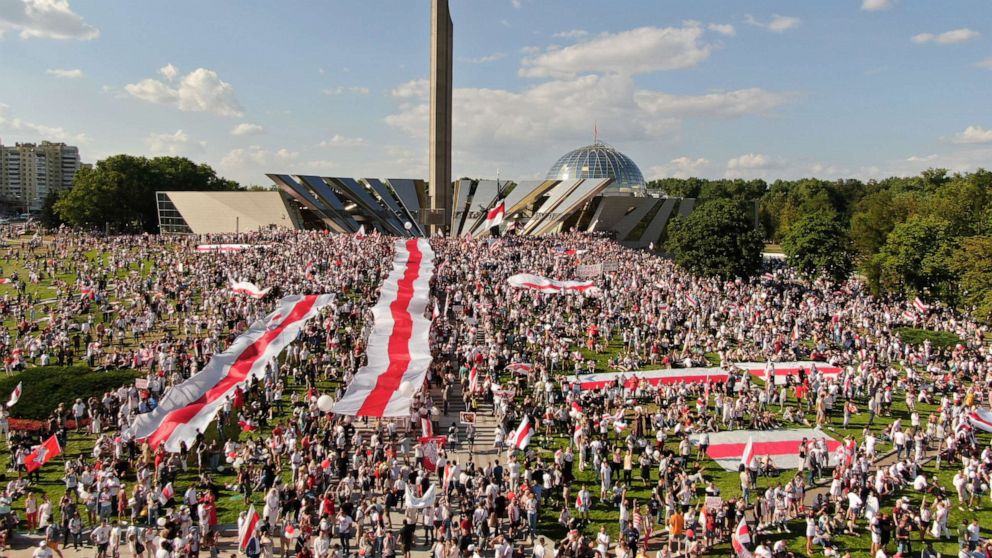 MINSK — Vast crowds of protesters flooded Belarus’ capital of Minsk on Sunday in the largest political demonstration in the country’s history, demanding that its authoritarian leader, Alexander Lukashenko, step down.

Demonstrators in the capital were estimated to number well over 100,000.

Thousands more protested in towns and cities across Belarus, building on the movement that has been growing since last weekend’s contested election and posing a colossal challenge to Lukashenko, known as “Europe’s last dictator,” who has ruled the former Soviet country for 26 years.

In Minsk huge processions of people, cheering and carrying red and white flags, converged on a monument known as the Stele, which just last week police violently kept them from reaching — part of the brutal crackdown that has seen thousands detained and hundreds injured.

On Sunday the police had withdrawn entirely as the sea of demonstrators swamped the city center. The only police in sight were a handful of traffic officers struggling to direct traffic amid the jubilant crowds and as drivers honked and passengers hung out the windows.

The protests began last Sunday after a presidential election that gave Lukashenko over 80% of the vote and main opposition candidate Svetlana Tikhanovskaya just 10% amid allegations of widespread vote rigging. The protests that started out with several thousand have grown throughout the week despite the crackdown by security forces.

Protesters themselves appeared amazed by the scenes. One woman holding a banner stared out over the crowd and told ABC News it was “a miracle.”

“We’ve never seen something like this in Belarus,” said Helena Shchliakova, a 27 year-old fashion designer as she surveyed the scene.

Earlier Sunday Lukashenko staged his own counter-rally on the city’s central Independence Square, with thousands of people who were brought in on buses from around Belarus. ABC News drove past dozens of buses lined up on both sides of several streets for more than a mile.

Lukashenko himself appeared at the government rally, telling the crowd that “we will not give the country up.” He dismissed the idea of new elections, saying, “If we go into that swamp, we will never get out.”

Speakers at the rally said it was protesters and not Lukashenko’s security forces that had used extreme violence and injured hundreds.

“For three days we have seen the country in blood; for three days we’ve have been afraid to let our children into the streets,” an official from the nationalist Liberal Democratic Party (LDPR) told the crowd.

“Will there be revolution?” he asked.

“No,” the crowd answered.

Belarus’ interior minister, Yuri Karayev, told a Belarusian camera crew that peaceful protesters were being used as pawns and that police were needed to keep protests safe.

Many demonstrators said they thought the protests had surged because of anger provoked by that crackdown, particularly the accounts that have emerged of brutal treatment and torture of people detained during the protests over the past week.

Police were said to have detailed 7,000 people over three days, and dozens of those released in the past two days have provided accounts of ritual beatings and people stripped naked and held without food for days. Medics at a makeshift first aid tent set up by protesters outside one of the jails told ABC News that they had treated men who had been raped with truncheons.

Protesters on Sunday hailed the massive crowds as a pivotal moment that could signal no turning back.

Maria Kolesnikova, who has become one of the three female leaders at the head of the opposition, appeared at the protest and called on the security services and government workers to come over to the side of the demonstrators.

“Overcome your fear like we have overcome ours,” said Kolesnikova, the former campaign manager of a jailed opposition candidate.

It was unclear what Lukashenko would now do. At the rally, he suggested again that he might use force to disperse the crowds, but the vast scale of the protests mean it’s unclear whether the security forces and military remain sufficiently loyal to do that.

There is also great uncertainty around how Russia will respond to the unprecedented protests on its border. Lukashenko has been a longtime ally of the Kremlin and on Saturday he claimed president Vladimir Putin had offered to send help if requested, after the two had a phone conversation.

There is a disquiet among protesters that Russia might yet intervene, potentially even militarily, to rescue Lukashenko in return for him giving in to Moscow’s long-running demands for greater integration of the two countries.

“We know that the regime is ready to do anything just to hold onto power,” Kolsenikova told the crowd. “Belarus’ sovereignty is not up for trade or discussion. To protect their country from an assassination attempt on her independence, Belarusians will fight as valiantly as they are now fighting with the violence from this government,” she said.

Thousands of protesters continued walking triumphantly around Minsk’s center late into Sunday evening. A group of demonstrators relaxed on the steps in front of parliament where Lukashenko had spoken, an area normally off-limits to people, and the scene where thousands of demonstrators were violently dispersed after another disputed election in 2010.