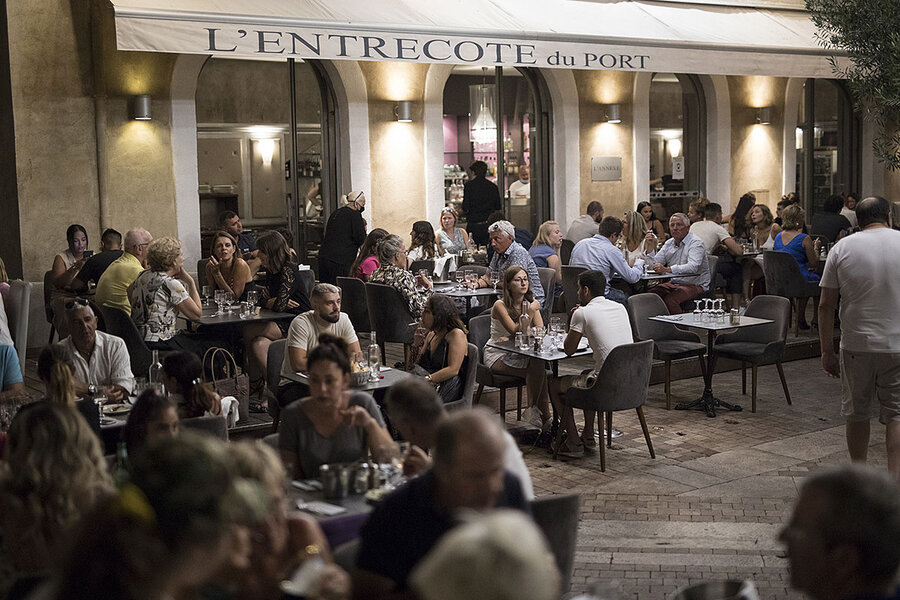 Set along the Marseille coastline is Vallon des Auffes, a quaint, old fishing harbor and much-loved summer aperitif spot. Even during a pandemic, groups converge here to watch the sunset, sometimes over a plate of chickpea fritters known as panisse.

But despite the picturesque surroundings, a common sight at the few eateries here, as well as across the city, is cigarette butts.

The abundance of used cigarettes and other litter that gets strewn about – either by its famous mistral wind or carelessness – has given Marseille the reputation as France’s dirtiest city. It’s a constant battle to stop waste from ending up on the ground and in the nearby Mediterranean.

“Cigarette litter is a big problem,” says Jonathan Luciani, the manager of Chez Jeannot, a Marseille institution in Vallon des Auffes that is famed for its pizzas. “Having a clean terrace is a huge advantage, but we also want to show we are sensitive to [environmental] issues. Many of the Marseillais are not yet so aware.”

Chez Jeannot is one of 40 establishments and counting to join the Ma Terrasse Propre (My Clean Patio) initiative, launched by local nongovernmental organization Recyclop in 2018, to reduce cigarette waste and educate smokers about how they can decrease their environmental impact. It joins the Clean My Calanques (Clean My Inlets) challenge, which saw volunteers collect more than a ton of waste, including millions of cigarette butts, from Marseille’s beloved rocky coast at the end of July.

There has been a renewed interest in such environmental initiatives in France since the country came out of its lockdown on May 11. The drop in air pollution, closure of recycling centers, and spring cleaning en masse during confinement have pushed pollution and ecological solutions to the forefront of public concern.

This month, Marseille banned smoking at four of its beaches, and in early June, the French government announced that it was upping the fine for littering – including cigarette butts and disposable face masks – from €68 to €135 ($80 to $160). A controversial law looks to outlaw outdoor terrace heaters at bars and restaurants across the country next year.

Now, as France cautiously reopens its cafes and restaurants, with most favoring outdoor seating, there is a desire to get off to a fresh start and lead by example. But as eateries work to tackle their level of waste as well as look ahead to measures that discourage smokers and those who cater to them, owners of food and drink establishments must balance respecting personal freedoms with reducing their environmental footprint.

“A very interesting consequence of the pandemic has been an awareness about how we must dedicate ourselves to preserving the planet in the long term,” says Josette Halégoi, a psychosociologist and author. “Cafes play an extremely important role in French society … so they really need to move towards sustainable measures like using bulk items or less plastic, ways of life that individuals have already adopted.”

“Once a cigarette hits the ground, that’s everyone’s problem”

Cigarette litter is hardly a new phenomenon, nor is it unique to Marseille. Despite a recent tax hike on cigarettes in France that has pushed some packs over €10 each, and the mass distribution of pocket ashtrays, littering cigarettes on the ground remains habitual. Last summer, a group of youth collected 10,000 butts in one hour on the lawn next to the Eiffel Tower.

Since France’s indoor smoking ban came into effect in 2007, cafes, bars, and restaurants have had to find ways of disposing of cigarette waste. Recyclop founder Abdès Bengorine says that cafes get the largest concentration of cigarette butts in his city. One butt can pollute 500 liters (132 gallons) of water, making the issue especially pertinent for port cities like Marseille.

“If we can stop them ending up on the ground at cafes,” says Mr. Bengorine, “we will have accomplished a lot.”

Participating establishments in Ma Terrasse Propre receive a receptacle capable of holding 10,000 cigarette butts. When it reaches its limit, the butts are sent to a local company specializing in the disposal of toxic waste. There, the butts are incinerated, turned into water vapor, and transformed into electricity via a turbo-generator.

The goal of such a system, per Recyclop, is to recycle waste without creating new waste, such as plastic. Since its launch, the organization has aimed to not just create new environmentally friendly solutions but educate smokers on their personal responsibility.

“We’re not trying to take the moral high ground about whether you should smoke or not,” says Mr. Bengorine. “If you want to smoke, that’s your problem. But once your cigarette touches the ground, that’s everyone’s problem.”

A new urgency to cleaning up France

Still, it has been a balancing act for lawmakers to find a happy medium between driving environmental change and keeping the economy afloat. The French government recently unveiled a plan to ban outdoor terrace heaters starting in early 2021, directly impacting cafes and restaurants that have relied on them since the indoor smoking ban went into effect. Mr. Luciani of Chez Jeannot says it will be especially hard for establishments with a small interior, where their turnover could be cut by 80% during the winter months.

But France has been forced to improve its sustainability efforts when it comes to cigarette butts and litter in general. If not only to compete with neighboring recycling leaders Austria and Germany, then to address growing calls within local and national agendas.

At the end of June, the French government accepted nearly all of the 149 ecological solutions proposed by a 150-strong citizen climate group. And in the recent local elections, many towns committed to developing waste management and recycling initiatives.

“We were in a period of time in France where the citizen climate assembly, the local elections, and the pandemic coincided unexpectedly,” says Michel Cruciani, an associate research fellow at the Center for Energy & Climate at the Paris-based think tank Ifri. “These events all contributed to an overall greater awareness.”

It’s certainly been the case in Marseille, where the recent election of Mayor Michèle Rubirola has raised the hopes of Marseillais environmentalists, given her history of activism on green issues in the city. It’s a break away from the city’s poor record – from air and sea pollution to the scourge of cigarette butts – under the previous mayor who stayed in place for 25 years.

“There’s a new optimism here,” says François, a customer at Chez Jeannot, as the sun dips below the Mediterranean. “Marseille might finally get cleaned up.”