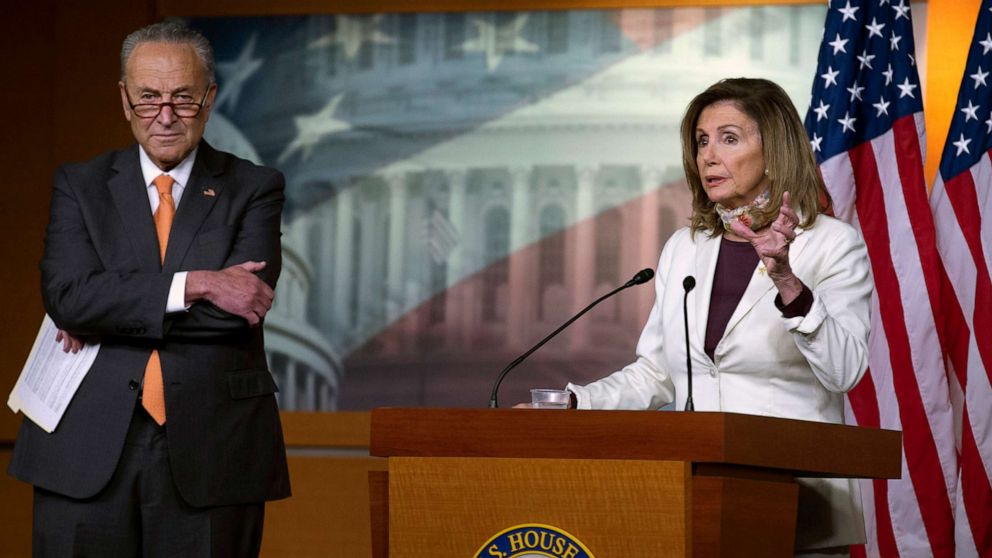 As President Donald Trump continued to lambast the Postal Service, House Democrats on Monday pressed forward with their efforts to address the political firestorm over whether the USPS can manage an influx of mail-in ballots this November.

After House Speaker Nancy Pelosi said over the weekend she would call the House back this week, a senior House Democratic aide told ABC News Monday that the House is expected to vote Saturday on a measure that will include $25 billion in new funding for the post office.

The bill also would seek to reverse operational changes made to the agency since January 2020 that many Democrats say will hurt handling ballots.

Per an aide, the $25 billion number was requested directly by the USPS Board of Governors. The aide notes that the Board is “100% Trump appointees.”

For weeks now, lawmakers have expressed concern about the ability of the Postal Service to meet the demands of an election which will see more voters casting their ballots by mail due to the coronavirus pandemic. Those concerns were amplified last week when the Postal Service issued warnings to states that it could not guarantee all ballots cast by mail would arrive in time to be counted.

Democratic lawmakers have also raised flags about the man at the helm of the agency, Postmaster General Louis DeJoy, a former Republican donor who only recently took control of USPS and who has since implemented rollbacks that Democrats say have slowed the delivery of the mail as the agency flounders due to budget shortfalls.

As the House announced its intention to vote on the matter, President Donald Trump on Monday continued to rail against the Postal Service on Twitter and in an interview with “Fox and Friends” Monday morning.

Trump said that the post office was “running very well” and, in response to critics who have argued that DeJoy’s ordered changes have slowed the mail, said that he never instructed the postmaster general to delay the delivery of mail.

But moments later, Trump changed his posture and began criticizing the agency for losing money.

The president also repeated unfounded claims that universal mail-in balloting would lead to fraudulent elections while on “Fox and Friends.”

Universal mail in balloting is “a very dangerous thing that’s fraught with fraud and every other thing that can happen,” Trump said during the interview.

Though the House is poised to take legislative action on Saturday, whether the House bill would even come to a vote in the Republican-controlled Senate is less clear.

Senate Majority Leader Mitch McConnell on Monday at an event in Kentucky said he was at odds with Trump on some of his comments related to the post office.

“I can tell you what I think which is the Postal Service is going to be just fine, we’re going to make sure that the ability to function going into the election is not adversely affected, and I don’t share the concerns – the presidents concerns,” McConnell said.

He pointed to the administration’s offer, in ongoing negotiations on coronavirus relief, to provide $10 billion in funding for USPS as part of a larger package.

Talking with reporters on Monday, White House Chief of Staff Mark Meadows, who has been present for negotiations with Democrats on COVID-19 relief, told reporters called a stand-alone post office bill “not only unrealistic but unnecessary.”

“The president is very clear he’s willing to provide money for the post office as long as it is included in some other skinny measure if we can’t agree to a larger deal,” Meadows said.

Negotiations on COVID-19 relief remain at a standstill after weeks of bitter bargaining between the administration and Democrats concluded with the Senate heading into an extended recess without relief legislation being considered on the floor.

Democrats have opposed a so-called “skinny” solution which would involve passing legislation to address certain issues caused by the pandemic while leaving other issues open to negotiation.

It’s not clear at this time whether Leader McConnell will face enough pressure to reconvene the Senate for a vote on stand-alone post office legislation should it clear the House.

McConnell’s office, asked if the Leader McConnell would consider calling the Senate back from recess to vote on post office legislation, said that there were “no scheduling updates” at this time.

On Sunday evening, Minority Leader Chuck Schumer called on McConnell to reconvene the Senate to vote on post office legislation.

“I call on Leader McConnell to bring the Senate back into session to quickly act on the House’s legislation that will undo the extensive damage Mr. DeJoy has done at the Postal Service so that people can get their paychecks, medicines, and other necessities delivered on time, and to ensure our elections will remain completely free and fair,” Schumer wrote in a statement.

Democrats fell in line behind Schumer issuing a series of calls on Twitter for McConnell to call the Senate back from recess. Some Republicans also joined in those calls.

Sen. Susan Collins, R-Maine, who has for days now been publicly at odds with President Trump on funding for the Postal Service, tweeted a full-throated call for the Senate’s return.

“The Senate should return this week to consider a COVID-19 package that includes the Postal Service Emergency Assistance Act—a bill I introduced w/ @SenFeinstein in July—which would provide USPS w/ up to $25 billion to cover losses or operational expenses resulting from COVID-19,” the Senator tweeted.

And while other Republican Senators have not gone so far as to advocate for a return of the Senate, Sen. Marco Rubio and Sen. Shelley Moore Capito also tweeted this morning in support of the postal service.

A group of Sen. Democrats wrote to the USPS board of Directors on Monday urging them to take action to reign in DeJoy’s policies which they say have delayed mail delivery and could prove harmful to the election.

The letter urges the board to reverse harmful policies implemented by DeJoy and argues that the board has the ” responsibility to reverse those changes and the authority to do so” under the Postal Reorganization act.

“The Board is designed so as not to be a partisan body. Federal law specifically restricts the number of Governors belonging to any one political party and requires that Governors must be “chosen solely on the basis of their experience” in fields relevant to Postal Service administration,” the senators wrote. “It is time to use your full power and authority on behalf of the Postal Service, the American people, and the “public interest” you are required to represent.”