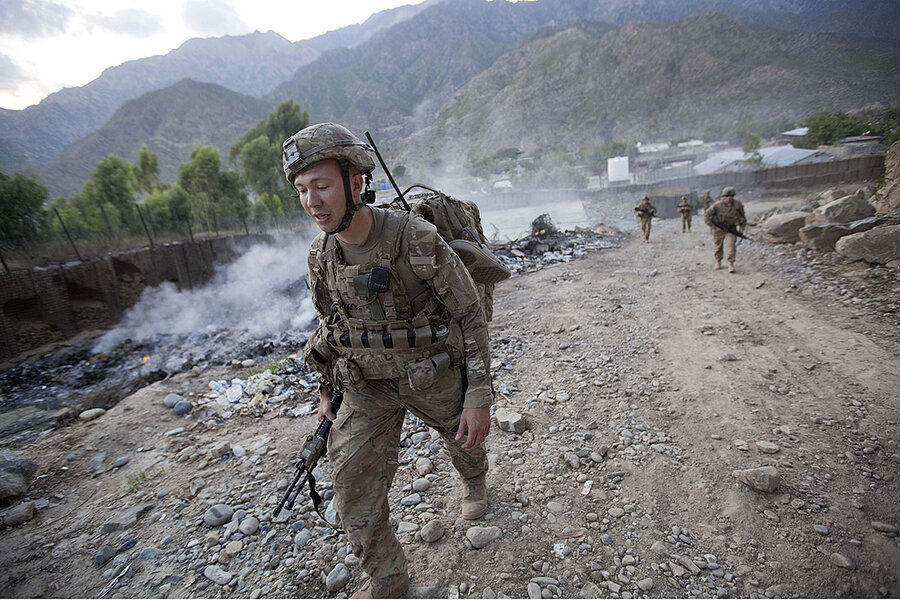 The coronavirus pandemic at once slows and blurs time. Each day suspends us between monotony and uncertainty, rendering tomorrow almost identical to yesterday, and foiling our efforts to imagine much beyond the present.

For five months, and to varying degrees from state to state, most of us have lived inside a closed-loop routine that resembles shampoo instructions: wake up, shelter in place, repeat. Confronted by that daily sameness, Colleen Ryan-Hensley relies on coping skills she honed while deployed aboard Navy destroyers in support of the wars in Iraq and Afghanistan.

“The way I maintained sanity was focusing on what I could control,” says Ms. Ryan-Hensley, who served in the Navy for 11 years and lives in Frisco, Texas. “I’ve tried to do the same during the pandemic, and that’s been helpful in keeping things in balance.”

The restrictions on civilian life, if as onerous for military veterans as everybody else, recall aspects of what they endured in war. Their memories of deployment – the constricted living conditions, the unseen threats, the mental fatigue – give them insight into surviving prolonged adversity, and their experiences after leaving the military offer lessons about adapting to ambiguity.

What can we learn from them to navigate the pandemic? Five veterans of the Iraq and Afghanistan wars share their perspectives on perseverance, resilience, and what we might gain from our collective struggle.

Finding meaning in the moment

Misha Pemble-Belkin intended to serve 20 years in the Army. A rocket blast during his second combat tour in Afghanistan in 2011 derailed his plan, inflicting injuries to his back and neck that forced him into medical retirement four years later.

The loss of a military career that began in 2006 cast him adrift. He moved to Vermont and worked as an apple picker and stock clerk, despite searing back pain that made the simple act of rising from bed a Herculean feat. Depression linked to his deployments shadowed him as he fell below the poverty line.

The ordeal taught him to find meaning in the moment. “As hard as things are, the pandemic will eventually pass. Until it does, look for simple joys,” says Mr. Pemble-Belkin, who appeared in “Restrepo,” an Oscar-nominated documentary about his Army unit’s 15-month tour in Afghanistan that ended in 2008.

He recalls pausing each morning as he picked apples to watch the sun crest the Green Mountains. “It doesn’t sound like much, but those little bits of beauty can help you survive the day.”

The father of two young daughters, he fought against despair, willing himself to meet the day. In time, he joined the staff of Vermont Adaptive Ski and Sports, an organization in Killington that works with disabled children and adults. He realizes that millions of unemployed Americans face a dire plight as the economy sputters. He urges them to keep rising from bed.

“You have to get up and take those first breaths,” he says. “The only chance tomorrow will be better is if you get through today.”

The end of Jeff Hensley’s 21-year Navy career in 2009 cued an identity crisis. The retired fighter pilot deployed twice to Iraq and lost one of his closest friends there. He returned to his native Texas with his first marriage collapsing, three children to raise, and his sense of self in free-fall.

Hanging up his uniform prodded him to redefine his purpose, to emphasize personal growth over professional pursuits. He suggests that the upheaval of the pandemic has illuminated the need to nurture emotional well-being and reorder life priorities.

“If we search for answers to the question of who we are beneath our work and within our relationships, we’ll be more comfortable with ourselves no matter what’s happening around us,” says Mr. Hensley, a veterans advocate and pilot for United Airlines. “That’s especially important right now because we’re dealing with something that’s so beyond our control.”

The widening impact of the coronavirus “makes it clear that all of us are vulnerable,” says Mr. Hensley, who is married to Ms. Ryan-Hensley. As the number of cases climbs, he adds, we can seek to alleviate our own unease by showing empathy for others.

“This is something that everyone is going through. Everyone has fears, anxieties, occasionally anger,” he says. “If we recognize that we share those emotions, even if we show them in different ways, that can bring us together. This is a shared experience, and there is a common humanity.”

Treating hardship as an opportunity

The long months at sea during Ms. Ryan-Hensley’s wartime deployments in 2003 and 2005 offered ample time for bleak thoughts to fester.

She reined in her mind with a resolute focus on her tasks as a combat systems analyst, and she has applied a similar discipline since the pandemic arrived. A set of routines – for work, household chores, family conversations, exercise –  serves to reassure her in the absence of the old normal.

“We have no other choice except to adapt,” says Ms. Ryan-Hensley, who works for Unite Us, a tech company that coordinates health care and social services for vulnerable populations. She attempts to treat hardship as an opportunity to build inner strength.

“There is value in recognizing your ability to overcome circumstances that you’ve never encountered before, that you never imagined,” she says. “It can give you the confidence to face difficult situations in the future.”

Ms. Ryan-Hensley established a wellness program at the San Diego naval base where she was stationed before leaving the military in 2010. She later provided counseling services for active-duty troops, veterans, first responders, and caregivers, and she encourages those mired in distress over the pandemic to ask for help from clinicians, trusted peers, or friends.

“If you’re suffering, realize you don’t have to do so in silence,” she says. “Because the reality is, almost everybody is suffering.”

Kevin Miller mustered out of the Marine Corps in 2006 after two combat tours in Iraq that included surviving a roadside bomb explosion. The war stayed with the onetime infantryman in the form of a traumatic brain injury, chronic neck and back pain, and post-traumatic stress disorder.

A range of physical and psychological therapies aided his slow recovery over the ensuing years, and in 2013, he found work with Swords to Plowshares, a veterans advocacy organization in San Francisco.

“I didn’t want to get blown up any more than any of us want to be going through a pandemic,” he says. “But now I can see the resilience I gained from that experience in Iraq, and there will be something we gain from this experience that will make us stronger. It’s just not something we can see yet.”

Mr. Miller summoned that willpower when the coronavirus outbreak threatened to upend long-gestating plans to move east this summer with his partner. They packed up last month and drove to their new home in a suburb of Washington, D.C., and he exhorts people to nurture their ambitions as a way to sustain the spirit.

“We decided not to put life on hold,” he says. “Obviously, not everyone can or wants to make a big life change right now. But at the very least, don’t stop planning your future and don’t stop having optimism about what you want to accomplish.”

Joshua Mantz died in Iraq in 2007. A sniper’s bullet caused his heart to stop for 15 minutes, until field medics revived him.

Mr. Mantz, a former Army platoon leader, recounts his physical and emotional recovery in his 2017 book, “The Beauty of a Darker Soul: Overcoming Trauma Through the Power of Human Connection.”

“The struggle that follows trauma pulls us where we need to go – not necessarily where we want to go – to feel whole again,” says Mr. Mantz, who lives in Las Vegas. The economic fallout from the pandemic has wrought a psychological toll that he describes as a kind of living death for Americans whose jobs have vanished.

“Losing your business, career, or life’s work – there’s severe trauma and a grief process involved with that,” he says. “So it’s important for people to seek out conversations that delve into that struggle rather than avoid talking about it. When we articulate feelings like shame and powerlessness with each other, it creates resonance between us.”

Mr. Mantz has founded a company, Phaedrus Factory, that teaches clinicians, military personnel, and law enforcement officers about the moral psychology of trauma. His call for compassion defies the country’s partisan rancor, reflecting his own journey out of the abyss and his gratitude to those who lifted him.

“A big part of healing comes down to hope and what we do to deliver hope to each other,” he says. “We’re really not in this alone, no matter how isolated we may feel.”