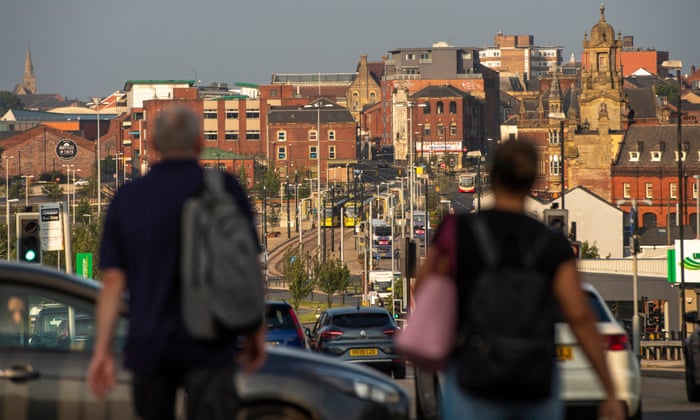 Oldham in Greater Manchester is 48 hours away from potentially being ordered into a “catastrophic” and “premature” local lockdown, its council leader has warned.

Ministers are expected to decide on Thursday whether to order the closure of the town’s bars, restaurants and gyms in the first local lockdown in England since hospitality businesses reopened last month.

The town has the highest coronavirus infection rate in England despite restrictions on social visits imposed three weeks ago. However, figures due to be released on Wednesday show the number of new cases is declining.

Sean Fielding, the council leader, said that being “pushed” into a full Leicester-style lockdown would be disastrous for Oldham’s already struggling economy and would not be “based on evidence”.

“Everything that is within our power we are doing, and there is some early evidence that is having an effect on the infection rate,” he said. “But we do need more time to see if that has really played out. I do think that moving into a local lockdown would be really premature.”

Transmission of the virus had spread rapidly in Oldham primarily through the more deprived streets of terraced housing, although officials believe local action to get the disease under control is beginning to work. There were 197 new cases in Oldham in the week to 15 August, compared with 255 the previous week.

In an attempt to stave off a full lockdown, Oldham officials have written to central government offering to tighten local restrictions – including banning households from meeting inside or outside – and stepping up enforcement action by police and environmental health officers.

The closure of bars, restaurants and shops would make no “measurable difference” to the transmission of the virus in Oldham, Fielding said, because the vast majority of new cases were spreading between households. “I don’t think it would be based on science or based on evidence if we were to be pushed into a local lockdown.”

He said it would also be very difficult to enforce as Oldham is “completely and utterly interconnected” within Greater Manchester and neighbouring West Yorkshire.

Fielding added: “The impact of a local lockdown economically on Oldham would be catastrophic and we desperately want to avoid that.”

The town, which is about 10 miles north-east of Manchester, is currently covered by the restrictions ordered by Matt Hancock on 31 July banning people from visiting family and friends and from socialising with other households in pubs or restaurants.

Fielding appealed to ministers to give local authorities more financial support to tackle the virus. He said Oldham council was “down £20m in our budget” and having to consider cutting essential services such as employment support.

Door-to-door contact-tracing work in the borough is being staffed by volunteers and council staff from other departments. “The government said that they’d give us the funding to deal with the financial impacts of this disease, but it hasn’t happened,” he said.

Meanwhile, Birmingham’s director of public health said the city could be placed on the “watch list” for areas most at risk of intervention within days as Covid-19 cases continue to rise.

Varney said the upward trend was concerning and case numbers over the next few days would be critical in determining whether further restrictions are needed.

Locals MPs said they were alarmed at the prospect of shutting down the country’s second-largest city and urged the government to improve its track-and-trace system so that smaller lockdowns can be implemented in hotspots.

“Locking down a city of a million people will be a complete nightmare,” said Liam Byrne, Labour MP for Birmingham Hodge Hill. “If we can do precision lockdowns, that will make everybody’s lives easier, but that means the government has got to get a track-and-trace system in place that is functional and that people trust.”