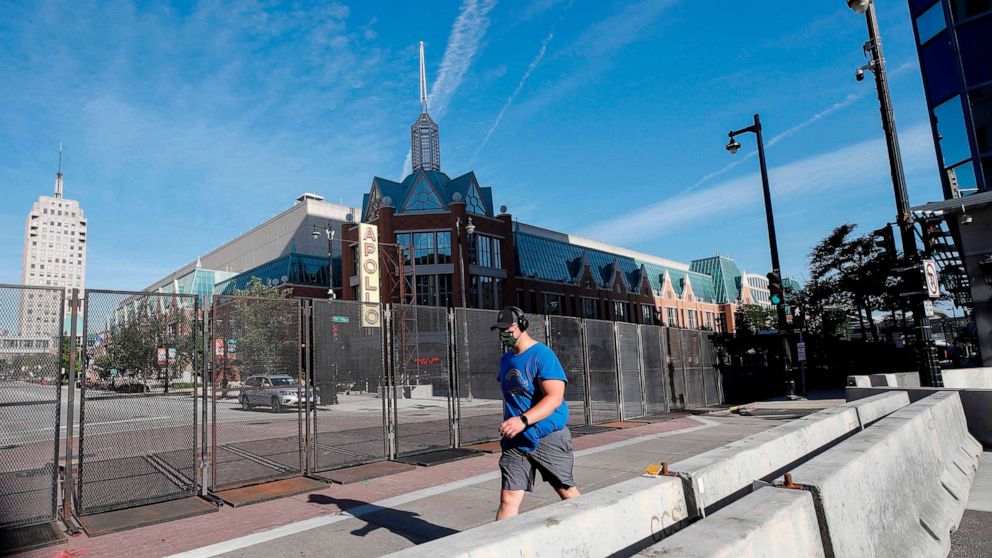 Stephen Parlato, a retired mental health counselor from Boulder, Colorado, didn’t let the coronavirus stop him from traveling to Milwaukee for the Democratic National Convention to protest against President Donald Trump.

He is one of the few who made the trip.

“It’s important that we raise our voices and do anything and everything we can at this point in time,” he said Monday afternoon, through his K95 mask, as he waved a sign that read “Your Vote is the Only Antidote” near the security barrier set up around the Wisconsin Center in downtown Milwaukee.

Before the COVID-19 pandemic, the Democratic convention was supposed to bring 50,000 people to Wisconsin’s largest city, crowding its hotels, restaurants and bars for a full week this summer.

I was supposed to be one of those visitors — and was looking forward to returning to Wisconsin, where I went to college, to attend my first presidential convention. But the pandemic forced Democrats to repeatedly downsize their ambitions for the convention, and eventually scrap plans for Joe Biden to accept the party’s nomination in Milwaukee.

Instead of a packed flight from Washington, D.C., I flew on a relatively empty plane to Milwaukee’s General Mitchell Airport, where one of the few signs of the political event anchored in town was a large C-SPAN billboard on the highway leading into the city.

Democratic National Committee Chairman Tom Perez, a group of party officials and a production team putting on the event, a handful of local and national journalists and the Secret Service are all that’s left of what was supposed to be Milwaukee’s coming out party: a celebration of the midsize city that punched above its weight to land the convention over Miami and Houston.

“The weather is perfect. Everyone was excited to show up and show out for Milwaukee,” said Alex Lasry, the senior vice president of the Milwaukee Bucks and the finance chair of the Democratic National Convention host committee. “It’s just disappointing that we’re not going to be able to do that.”

Milwaukee Police and Secret Service cordoned off several square blocks of the city around the Wisconsin Center — an event space overshadowed by the nearby Fiserv Forum, the home of the Milwaukee Bucks and the original site of the DNC — with metal barriers and security checkpoints as easily recognizable as those around the White House and Capitol Hill in Washington, D.C.

On Monday afternoon, political protesters and even official attendees were few and far between, dwarfed by the number of law enforcement officers manning the checkpoints and doing laps inside the fencing on bicycles.

Several Milwaukeeans were spotted checking out the site on the way to run errands, or as they jogged and walked their dogs. A group of American Civil Liberties Union observers repeatedly walked around the perimeter — perhaps to prepare for some larger demonstrations planned for later in the week.

The lobby of the Hyatt Regency Milwaukee, the DNC’s hub outside the security perimeter, was similarly empty. A small DNC store was open, hawking official event shirts, tote bags and coffee mugs — albeit with social distancing spots marked on the floor.

Stella’s, a local dive bar that sits just outside the security zone, would’ve been packed on the opening day of the convention in Brew City. Despite the lull, though, it remained open for its few customers. “Mask up, drink up, let’s party,” read a sign outside its door.

Some business owners are hoping Democrats return to Milwaukee to hold an in-person convention in four years. But Lasry, who played a major role in the successful bid for the convention, is already looking beyond the DNC.

“My hope is that we just might not have the availability in the calendar [in four years],” he said. “We should be able to take the 2020 convention and generate that level of interest toward yearly, sustained economic impact. That’ll be, I think, more beneficial than trying to get something once every four years.”