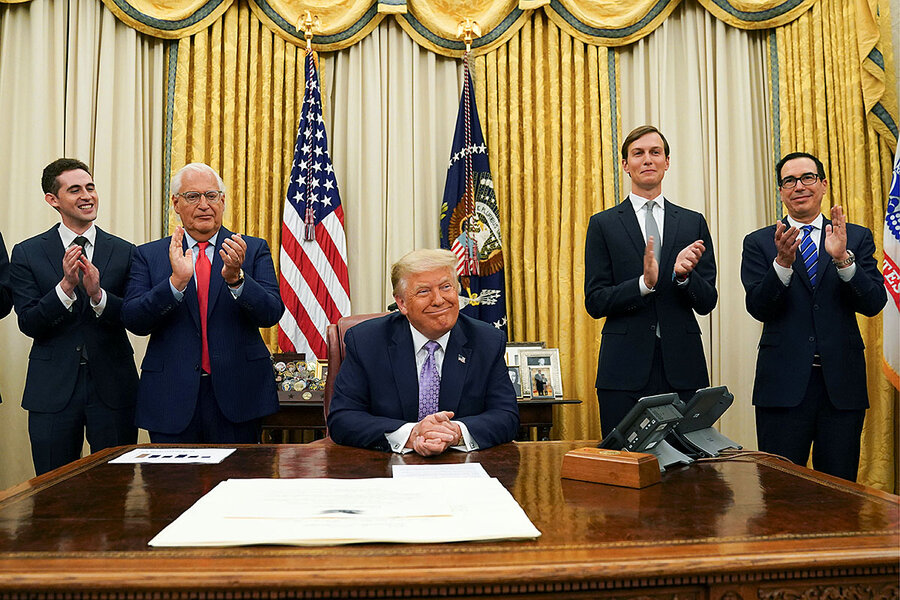 The deal announced Thursday, which the White House called a “historic diplomatic breakthrough,” is clearly a feather in Mr. Trump’s foreign policy cap – a cap that by most estimations has had few feathers to boast.

The Israel-UAE deal “is the first unambiguous diplomatic success for President Trump, and such successes are few and far between for any administration,” says John Hannah, a senior counselor and expert in Arab politics at the Foundation for the Defense of Democracies in Washington.

Pointing to the renegotiation of NAFTA, relations with NATO, and North Korea diplomacy, Mr. Hannah says, “It’s hard to identify an issue or accomplishment this president has made … that doesn’t have a serious element of controversy or criticism from other people.”

But he notes that even former Vice President Joe Biden, the presumptive Democratic presidential nominee, praised this agreement.

Political experts differ over whether the deal is likely to have any measurable impact on the president’s reelection fortunes. Most say the COVID-19 pandemic, the economy, and social unrest over race relations, leave little room for foreign policy issues to have an impact.

The deal may not deliver a bump in the polls, Mr. Hannah says, but it will likely energize the president’s supporters, among them evangelical Christians who put a premium on Israel’s security.

“Foreign policy always plays at the margins” of presidential campaigns, he says, adding that “this could be the gift that keeps on giving” – especially if additional accords with Arab states allowed the White House to orchestrate “one of those iconic signing ceremonies on the South Lawn that everyone remembers.”

Nevertheless, some regional experts remained cautious about Thursday’s deal, noting that within hours of President Trump’s announcement, both Israel and the UAE were issuing conflicting statements on what they had actually agreed to.

“There are more questions at this point than there are answers,” says Shira Efron, a visiting fellow at the Institute for National Security Studies in Tel Aviv. “Each side frames the accord very differently.”

She notes the Emirati crown prince, known colloquially as MBZ, spoke of the agreement as a “roadmap” for establishing ties, while Mr. Netanyahu spoke in English of a full peace agreement – while then insisting in Hebrew that West Bank annexation “is still on the table.”

In the Oval Office, flanked by most of his top foreign policy and national security advisers, Mr. Trump hinted that additional similar announcements could be forthcoming from other countries.

Some regional experts pointed to Bahrain as the next likely candidate for any normalization plan with Israel.

Mr. Trump’s Oval Office entourage included son-in-law Jared Kushner, who was largely credited by officials and outside experts with securing the diplomatic coup.

Speaking after Mr. Trump, Mr. Kushner said the president had instructed him to take “an untraditional approach” to the Middle East, advice he said has started to pay off. For his part, Mr. Trump said, referring to his son-in-law, that “people don’t always understand what he’s able to do.”

The president fancies himself, however, as the great deal-maker. Yet other diplomatic coups he has promised have proved to be illusive, which is one reason securing the Middle East breakthrough is clearly important to him.

The president did strike an initial trade deal with China in January. But since then relations with Beijing have sharply deteriorated in large part over the coronavirus pandemic, and now Mr. Trump has turned his back on a trade deal that in any case isn’t meeting modest expectations.

Mr. Trump’s Iran policy based on crushing sanctions has devastated the Iranian economy but alienated the U.S. from its traditional allies and left the regime in Tehran with a restarted nuclear program and making mischief in the region.

The president recently told a group of supporters that if reelected he would have a new deal with Iran “within four weeks” – which in any case was acknowledgment that his hopes of reaching a “Trump deal” with Tehran in his first term had fallen short.

At the White House Thursday, national security adviser Robert O’Brien said Mr. Trump had inherited a “mess” in the Middle East when he took office, but that the Israel-UAE deal was one more step in fixing the region. Few Middle East experts share that assessment, however, with many critical of a policy they say is based on waning U.S. focus on the region and lacking a strategic vision.

But some more supportive observers say the Israel-UAE deal will strengthen the U.S. effort to work with regional allies to counter Iran’s destabilizing activities. A normalization of business relations and security ties that had already existed not-so-secretly for years between Israel and the UAE will likely prompt other Arab states to follow suit, they say, and enable Israel and Gulf states to more effectively work to weaken Iran’s influence.

Some had doubted approach

Some regional experts acknowledge that the UAE-Israel deal represents a significant success for the Trump Middle East approach that they had doubted could work.

The UAE’s “willingness to move down the path to full diplomatic relations without settlement of the Palestinian issue” is clearly “in line with the Trump peace deal,” says Michael Koplow, policy director at the Israel Policy Forum. “I had been doubtful about that step,” he says. The Israel Policy Forum is a New York-based organization that supports cementing Israel’s security through the conclusion of a two-state solution to the Israeli-Palestinian conflict.

Additional success of the Arab-relations-first approach – for example a decision by Bahrain to follow Abu Dhabi’s lead – would constitute a further setback for the Palestinians, Mr. Koplow says.

“The Palestinians will have even less ability to pressure the Israeli government if they lose the normalization with Arabs” as a bargaining chip in negotiations, he estimates.

At the same time, however, some remained cautious about trumpeting the initial Israel-UAE deal as a cut-in-stone success. “By the end of Thursday the UAE was tweeting that it would require a full rejection of annexation to go forward” and not just Mr. Netanyahu’s suspension, says Ms. Efron, who is also a policy adviser with the Israel Policy Forum.

Still, Mr. Trump was happy to bask in the glow of the deal. At the Oval Office announcement, he said the deal would be known as the “Abraham Accord” in honor of the father of three faiths – Christian, Muslim, and Jewish. He then quipped that he “wanted it to be called the Donald J. Trump accord,” but he said he “didn’t think the press would understand that.”