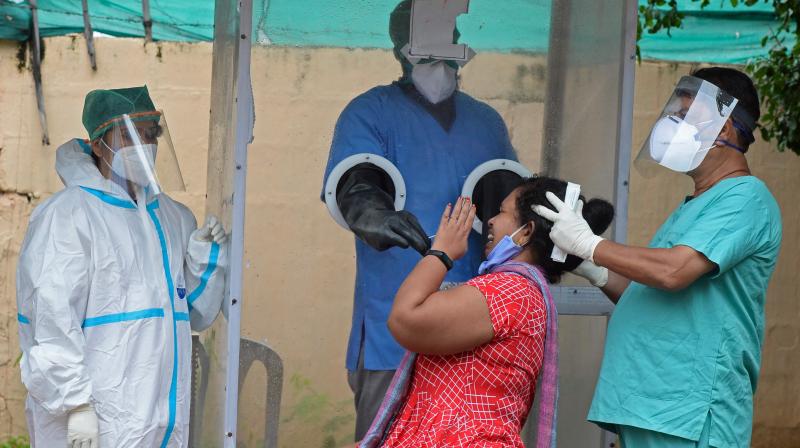 Boston: High levels of a molecule seen in severe COVID-19 patients may prevent them from developing long-term immunity to the novel coronavirus, according to a study which says such individuals tended to make very few of a type of cells which produced antibodies against the virus.

Scientists, including those from Harvard University in the US, noted that the release of massive amounts of molecules involved in cell-cell signalling in the body called cytokines can lead to some of the most severe symptoms of COVID-19.

They said high levels of cytokines increased inflammation and created a feedback loop in which immune cells produced more of these molecules in a process called a cytokine storm.

According to the study, published in the journal Cell, cytokine storms may prevent COVID-19 patients from developing long-term immunity since such individuals make very few of the type of B cells which produce antibodies.

"We've seen a lot of studies suggesting that immunity to COVID-19 is not durable because the antibodies decline over time. This study provides a mechanism that explains this lower-quality immune response," said study co-senior author Shiv Pillai from Harvard University.

In the study, the researchers assessed germinal centres, which are areas within the lymph nodes and spleens where B cells mature and start producing antibodies.

"When we looked at the lymph nodes and spleens of patients who died from COVID-19, including some who died very soon after getting the disease, we saw that these germinal center structures had not formed," said study co-senior author Robert Padera from Harvard University.

According to the scientists, in people with severe COVID-19, one of most abundant cytokines released is called TNF.

In infected mice, they said TNF appeared to block the formation of germinal centers.

Based on earlier studies on cytokine storm, the researchers said mice given antibodies to block TNF or in those that had their TNF gene deleted, the germinal centers were able to form.

When they studied the lymph nodes of patients who had died of the disease, they found high levels of TNF in these organs.

The scientists believe TNF may be preventing the germinal centers from forming in people with COVID-19 as well.

"We even think this phenomenon occurs in some patients with Ebola, so it was not surprising to us," Pillai said.

When the researchers studied blood and lymphoid tissue from people with active infections at different stages of COVID-19, they found that although germinal centers were not formed in these patients, B cells were still activate, and could allow them to produce some neutralising antibodies against the virus.

"There is an immune response. It's just not coming from a germinal center," Padera said.

Without the germinal centers, the scientists said the immune system may not develop long-term memory to the virus.

Based on studies of other coronaviruses that cause colds, Pillai said people can get infected with the same coronavirus three or four times in the same year.

Despite their findings, the researchers still believe a successful COVID-19 vaccine can be developed as it should not cause high levels of cytokines to be released.