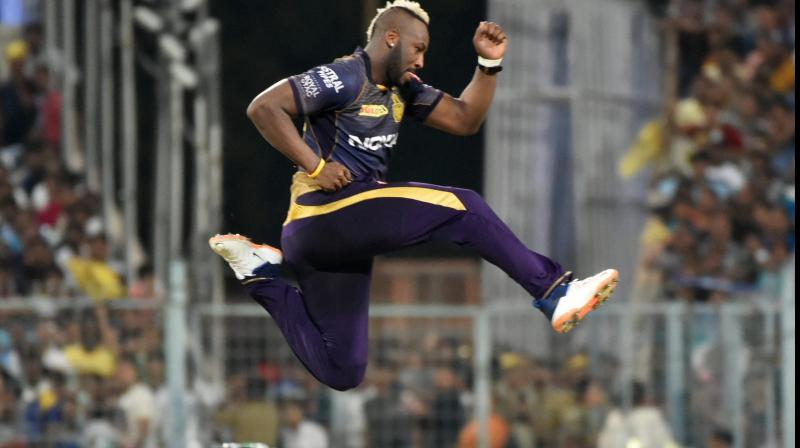 New Delhi: Big-hitting West Indies all-rounder Andre Russell says playing for Kolkata Knight Riders in the IPL gives him the "most goosebumps" and wants to remain in that side till his very last game in the league.

The 32-year old was speaking to KKR's official 'Knights Unplugged' online show. The Jamaican is currently at home as the IPL has been suspended indefinitely owing to the Covid-19 pandemic.

"Let me confess something, IPL is where I get the most goosebumps. I get that in CPL (Caribbean Premier League) as well but when it comes to playing in IPL, especially Eden Gardens, there is no comparison," Russell said referring to his team's home ground in Kolkata.

"…the welcome I get, that's love. It puts pressure on me but it's good pressure," he added.

Russell said the Eden crowd has been supportive towards him even when he hasn't exactly delivered and that's why it's the one place he would like to call it quits as and when he does.

"I would love to be at KKR until that moment when I say that this will be my last IPL. I have been at KKR for six seasons and I enjoyed every bit of it," he said.

"I know even if I fail two games straight, when I come out to bat for the third game, it is the same deafening reaction I will get from the crowd. It's always a welcoming thing," he said.

Hopeful of playing in the IPL some time this year, Russell also spoke about dealing with being away from his new-born daughter and wife. Both were in Miami when the coronavirus-forced travel restrictions came into force globally.

"She (his daughter) and Jassym, they are both in Miami. I stay connected to them and talk to them. I wish I could have them here, but with all these travel restrictions, we cannot do anything," he said.

"It's not really a situation anyone would want to be in. This is affecting the world, it's affecting me, preventing me from hitting sixes. Hope this thing calms down in a month or two and we can go back to normal life again."