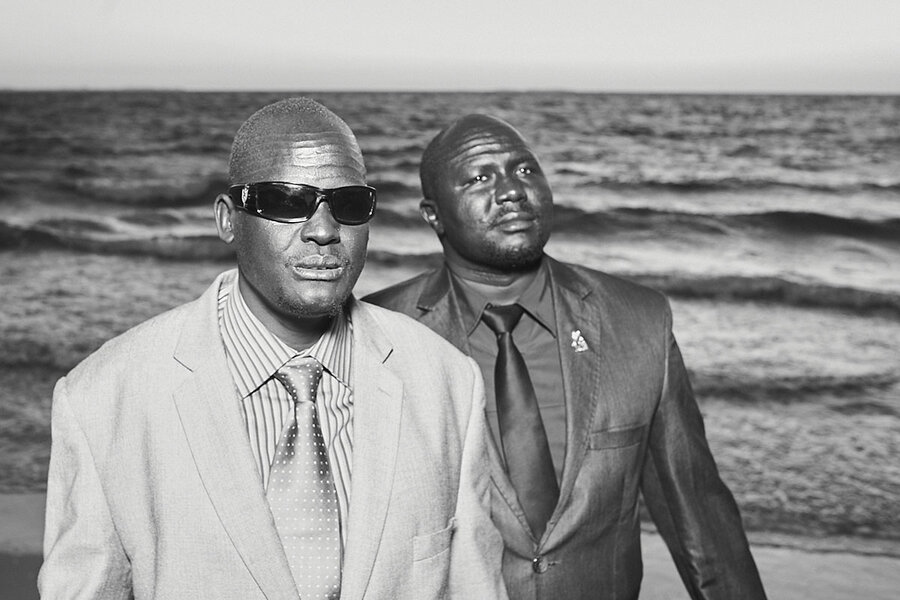 Mr. Koang, who is blind, started his musical journey accompanying the choir at his Presbyterian church in his hometown of Nasir. His instrument of choice is a thom (pronounced “tuhm”), which he was introduced to at a young age by a relative who wanted to help Mr. Koang feel less lonely while his family was out working. His custom-made version resembles a box-shaped acoustic guitar with a six-stringed lyre affixed to it. Eager to start composing songs of his own, he prayed for help. One night he had a dream in which a man taught him a melody. When Mr. Koang woke up, he quickly replicated the tune on his instrument. He still writes his songs this way.

“I thank God for it so much, because I call myself a songwriter. But I’m not writing them. They come in a dream. When I wake up in the morning, I get them in my heart,” he says in a video call from his apartment in Melbourne, Australia.

Mr. Koang eventually ventured to larger Sudanese cities such as Juba and Khartoum. He was accompanied by his cousin and best friend, Paul Biel, a percussionist. The duo built a fan base the old-fashioned way: gigging. They played gospel songs to a network of church communities and played secular folk songs on the city streets. They handed out free homemade compact discs. Radio play followed, as did opportunities to play in Ethiopia, Kenya, Uganda, and, later, shows overseas.

In 2011, South Sudan became independent from Sudan. Two years later, a civil war broke out in the fledgling nation. After a 2013 tour of North America, Mr. Koang and Mr. Biel flew to Uganda to reunite with their families at a camp in Kampala. Soon after, they toured in Australia. When the pair requested asylum in that country, they thought it would be a quick process that would allow their families to join them. But it was the start of an arduous limbo. They couldn’t seek employment until their new country granted them residence.

“We decided to be in this problem, because this problem is very little [compared with] the problem we moved from,” says Mr. Koang. “We kept hearing that all our friends and relatives had been killed.”

Mr. Koang started playing for small groups of people to make money to send to his family. He wrote “South Sudan,” a tribute to an aid worker he’d known in Africa, and also “Asylum Seeker,” a song of encouragement for those awaiting a ruling on their legal status. Mr. Koang’s voice performs a promenade dance with the thom, sometimes spinning twirls around the twanging melody lines.

All that reached the ears of Joe Alexander, the founder of Music in Exile, a nonprofit record label for refugee musicians in Australia. He set up the recording session for Mr. Koang and seven musicians, ranging from keyboardists to violinists, that led to the making of “Unity.”

“I have never met a man that continues to be so positive, and so warm, despite the most difficult and trying circumstances,” says Mr. Alexander in an email. “As soon as we sat down in the studio, he began dictating parts left, right and centre. He would sing a drum part, followed by a bass line, and a keyboard or guitar melody, and then join in with a completely unique and unexpected thom line or vocal melody.”

Mr. Alexander says that his record label’s mission doesn’t include overtly opposing xenophobia. But, he adds, “ultimately, the space that these musicians will occupy in the Australian scene will help to combat those feelings.”

The final track on Mr. Koang’s album is titled “Te Ke Mi Thile Ji Kuoth Nhial,” a prayer for his family’s safety and provision that he composed for his daughter in 2013 but hadn’t recorded until now. It stood out to Mr. Sartini Garner, the music critic, when thinking about the album.

“The sweetness and fun of much of ‘Unity’ frames the laments, and that contrast makes songs like ‘Te Ke Mi Thile Ji Kuoth Nhial’ that much more heartbreaking,” he says.

“They’re waiting for us,” says Mr. Koang. “We tell them when God finds a way, we will come to you.”