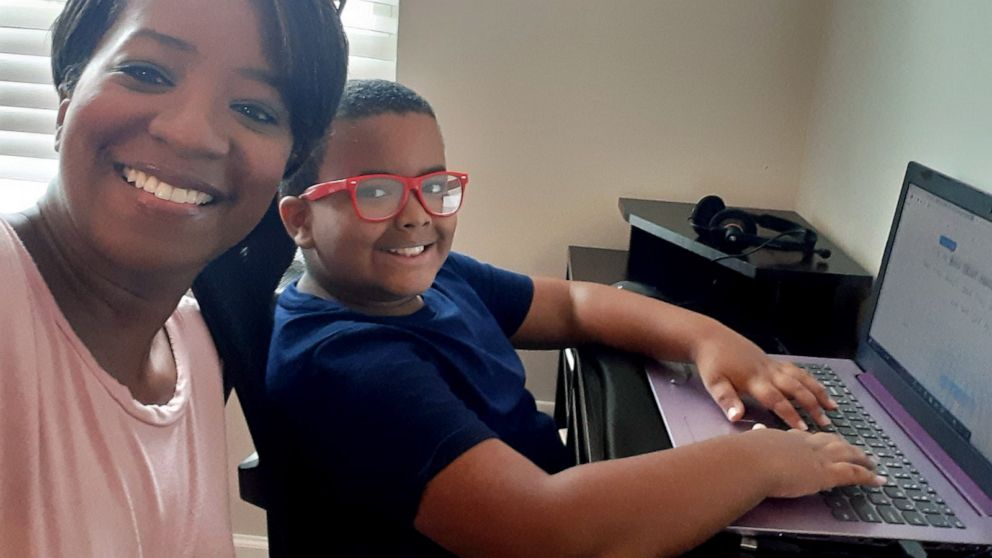 Matielyn Jones, a mom of two from Georgia, did everything she could to help her school-age son succeed as he navigates remote learning this semester — investing in a new laptop, desk and chair so he could be as prepared as possible to succeed in his virtual classes.

When her son’s first day of third grade rolled around, however, his school district’s remote learning portal abruptly crashed. Jones, who recently left her full-time job mostly to help her children with virtual learning this semester, felt helpless.

“It made me laugh a little on the inside, I think our teachers are doing the best they can, and our system, they’re trying,” Jones said. “I knew we’d have a bumpy start.”

Still, Jones said while she is confident her school district is “working out the kinks” and that she is happy her son can safely stay home, she expressed concern over how these tech hiccups will impact her son’s education this year.

“I do think for my son being in third grade, this is the first year that’s normally a standardized testing year,” she said. “I don’t know how that will go.”

As the coronavirus pandemic causes millions to work and learn from home, some educators and parents have expressed concerns over whether the technology infrastructure is in place for such a massive remote experiment.

Jones’ experience in Georgia was not unique. Parents across the country including in North Carolina and Florida reported similar issues amid the pandemic.

The bandwidth issue has come up as school districts are “not just talking about some students being online, but all students,” Keith Krueger, the CEO of Consortium for School Networking, an educational technologies advocacy group told ABC News.

“Especially, when you add video and other intense applications, that has huge implications,” he added.

Cybersecurity on these educational platforms is also paramount, Krueger noted, as students’ records and other information by law must be kept private and secure, “so the bandwidth needed if kids were at school doing that is different than when it has to go through the firewall, on the way up and the way down from the home.”

Krueger said many of the challenges with remote learning arose because of the abrupt transition and lack of adequate training for educators. Moreover, the lack of an existing platform or management system added confusion for many students, teachers and parents.

Tech barriers to remote learning also disproportionately impact low-income and minority students, Krueger said, contributing to a widening gap that leaves some students at risk of falling behind.

“Equitable access to devices, but particularly robust internet at home is certainly foundational,” he said. “You can’t do remote learning, or what we would prefer to call effective distance education, without that access.”

When a handful of school districts across the country suddenly were forced to switch to remote learning almost overnight, “We realized that it wasn’t just a digital divide for some students, but it was a digital chasm for particularly low-income, disproportionately students of color,” he said.

“With lower-income families, typically it’s a data-capped mobile device,” Krueger said. “And you can imagine, if we’re doing virtual learning, that the second or third day of the month, you could have hit your data cap easily.”

Moreover, Krueger noted if a family has a parent also working from home and siblings also doing distance learning, it puts greater pressure on the networks.

“It’s pretty clear that home internet access and access to a device appropriate for learning, the less income you have, the more likely that you don’t have those things,” he said. “And when you break it down to look at who those are, they’re disproportionately Black and Hispanic families.”

Krueger lauded the “Herculean effort” by local educators to ameliorate these inequities, through calling families individually and checking to make sure they have the tech tools they need. These efforts have largely been left up to local districts and school systems.

More than 60% of parents with school-aged children said that remote learning during the COVID-19 outbreak would negatively impact their finances, according to a Bankrate survey released last week. Some 30% of parents said they would incur additional miscellaneous costs such as on technology due to remote learning, and some 22% said they — like Jones — would have to cut back on their work hours.

“I think the most important thing as far as being at a disadvantage is if your parent can’t stay home,” Jones said. “Last semester was very difficult working from home and trying to [do] digital learning.”

She acknowledged that it was a privilege being able to leave her job and thought was the best thing for her family, but that not all parents can do that. She said her school district has said it would provide laptops to students who need them, but so far she thinks buying the computer for her son was “worth the investment.”

There are many advantages to distance learning when done right, and it has the potential to improve efficiency and more for many students, according to Krueger. He said further efforts need to be made, however, to ensure that students, parents and teachers gain access to the technology they need to do it well.

“What we really need is dedicated funding at the national level, so that it doesn’t matter which district, which state you live in,” he said. “Unfortunately, Congress and the White House have not come to an agreement on a new stimulus package.”