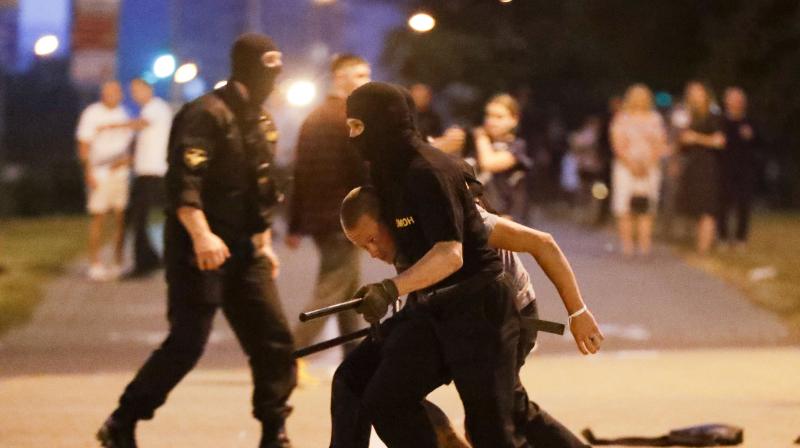 Minsk: Police in Belarus broke up crowds of protesters with stun grenades and rubber bullets as long-time leader Alexander Lukashenko looked set to declare an overwhelming victory in a presidential poll his opponents say was rigged.

Thousands of protesters took to the streets of the capital Minsk and other cities after a state exit poll showed Lukashenko winning just under 80 percent in Sunday's election, with main challenger Svetlana Tikhanovskaya coming second with about seven percent.

Tikhanovskaya, a 37-year-old stay-at-home mother and political novice, galvanised the opposition during the election campaign, attracting tens of thousands of supporters to the ex-Soviet country's biggest demonstrations in years.

In the capital Minsk protesters gathered near a central monument, where they formed human chains as they faced off against hundreds of riot police with shields, an AFP journalist and witnesses said.

A live video feed provided by US-funded Radio Liberty showed police firing stun grenades and advancing to disperse the crowd, with many fleeing. The channel posted images of young protesters with their faces and bodies covered in blood.

An AFP journalist saw at least one protester receiving medical treatment from paramedics, and others being dragged away by riot police.

Opposition-linked media outlets showed a video of a police van ramming into a crowd and running down a protester.

Government buildings in Minsk had been cordoned off, residents reported internet shutdowns and widespread connection problems, and social media posts showed columns of military vehicles on roads leading into the capital.

Alexander, a 35-year-old protester in Minsk, accused Lukashenko of blatantly rigging the vote.

"I came out to protest because the country needs a change in power," he told AFP. "This is a crime, a mockery of our people."

Videos posted on social media showed water cannon being used and there were reports of rubber bullets being fired.

After several hours of rallies, state news agency Belta quoted the interior ministry as saying that "police are in control of the situation." Protests had largely died down in the capital by 3 am local time (00:00 GMT).

"The police responded with disproportionate harshness, using their full force," he told AFP.

'Majority is with us'

In a news conference after polls closed Tikhanovskaya said she did not trust the results.

"I believe my eyes, and I see that the majority is with us," she said. "We have already won, because we have overcome our fear, our apathy and our indifference."

She also called on members of law enforcement to stop using force.

Her ally, Maria Kolesnikova, said the government was "incapable of running the country" and an "unprecedented" political crisis was setting in.

Preliminary results had not yet been announced, although the election chief had said she expected them in the early hours of Monday.

Lukashenko, seeking a sixth term, warned the opposition he was not planning to give up his "beloved" Belarus as security was dramatically tightened in the capital.

Tikhanovskaya decided to run for president after the authorities jailed her husband, popular blogger Sergei Tikhanovsky, and barred him from running.

On Sunday afternoon, huge queues formed outside polling stations in Minsk and other cities, after Tikhanovskaya urged her supporters to vote late to give authorities less chance to falsify the election.

Many wore white bracelets that have become a symbol of the opposition.

Tikhanovskaya has said that if she won she would release political prisoners and call fresh elections to include the entire opposition.

Lukashenko, who has been in power since 1994, vowed to maintain order, suggesting his opponents may be planning unrest.

"Nothing will get out of control, I guarantee you… whatever certain people have planned," the strongman said, casting his vote.

Nigel Gould-Davies, a former British ambassador to Belarus, said there was no doubt the polls would be falsified.

"The question is what happens then," Gould-Davies, a senior fellow at the International Institute for Strategic Studies, told AFP.

In the past Lukashenko has crushed protests with riot police and hefty jail terms, prompting Western sanctions.

"Given Lukashenko's ruthlessness, anyone who is concerned about Belarus will worry, will fear for the Belarusian people in the days ahead."

Lukashenko has sought to boost his support by warning of outside threats and raising the spectre of violent mobs.

Authorities have detained 33 Russians, describing them as mercenaries sent to destabilise the vote.