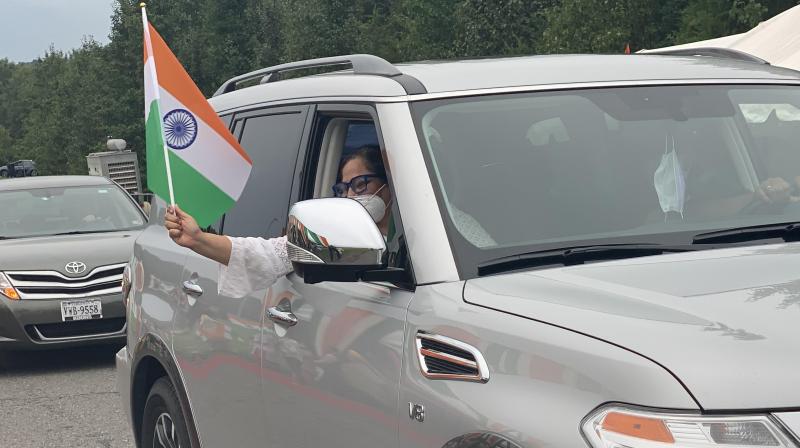 Washington: Under the concept of a drive-thru festival, more than 800 cars drove into a first-of-its-kind Independence Day celebration in the suburbs of Washington DC to commemorate India's 74th Independence Day.

People and their wheels lined up bumper to bumper to see a display of floats that gave the Indian diaspora the true essence of India packed with a punch of nostalgia.

The drive-thru festival was organised by husband-wife duo Manish Sood and Deepa Shahani. An innovative concept that was created by the Soods, had its own journey from ideation to execution keeping COVID-19 in mind.

Many in the crowd held India's Tricolour, dawned traditional ensemble and danced to the tunes of patriotic numbers.

The highlight of the event was, of course, the Indian Tricolour that was unfurled with pride and patriotism.

The flag was hoisted at the event by Minister Community Affairs, Anurag Kumar, who was the Guest of Honor.

Flowers were showered by a chopper on the flag and those who gathered to participate in the festivities presenting a spectacle for the local residents and visitors.

Meanwhile in New York, for the first time, the Tricolour was unfurled with pride and patriotism alongside the US flag at Times Square.

Over 200 Indian-Americans participated in the event to witness the Tricolour soaring high and wide in the skies of New York. They chanted patriotic slogans and raised Indian flags.