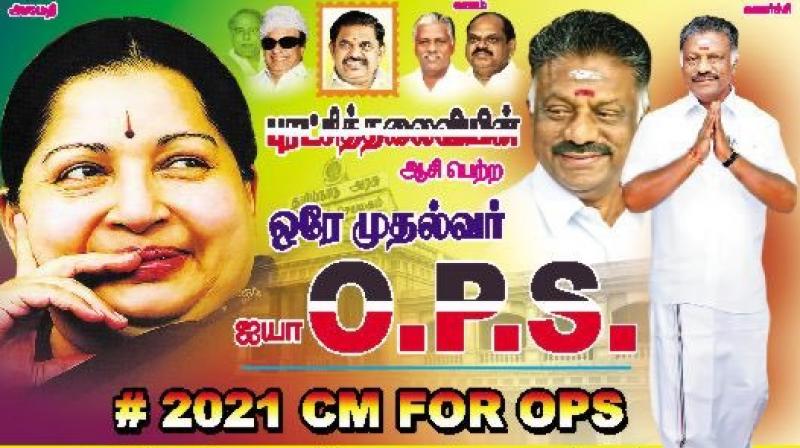 Quick action and a series of parleys by a group of top leaders in the AIADMK averted a major crisis that erupted all of a sudden on Saturday morning, turning Independence Day into a day of hectic intra-party interactions that finally led to a truce between Chief Minister Edappadi K Palaniswamy and deputy Chief Minister O Pannerselvam.

Though there had been indications of simmering differences in the party over the question of the next Chief Ministerial candidate for past few days with a few leaders expressing contradictory views, it was the appearance of a few wall posters in Pannerselvam’s Theni district that triggered Saturday’s events in Chennai.

The wall posters proclaiming Pannerselvam as the ‘only Chief Minister to have enjoyed the blessings of J Jayalalithaa’, ‘simple CM for the poor and common people’, ‘Jayalalithaa’s political heir’ and ‘permanent Chief Minister’ came with a hashtag – #2021 CM for OPS.

Apparently put up by the people of Kenjampatti village in Bodinayakannur Taluk of Theni district, the posters ignited a discussion soon after Palaniswamy concluded his Independence Day speech from the ramparts of Fort St George, declaring that he had ‘the love and support of the people’ and that he would continue to work for them with their well-being as his only goal.

Sensing trouble brewing within the party, the group of senior leaders went into a huddle for less than an hours at the chambers of Fisheries Minister D Jayakumar after both Palaniswamy and Pannerselvam had left for the day.

The leaders first drove to Pannerselvam’s house as an entourage and had discussions with him for one and a half hours. While they were there, Pannerselvam called up his people back in Theni asked them to remove the posters that were causing the stir.

Then they went to meet Palaniswamy and were closeted with him for 40 minutes before returning to Pannerselvam’s house again. After their second visit to Palaniswamy’s house, it was decided that the two leaders would bury the hatchet and issue a joint statement which had been the norm in the party ever since the two factions came together earlier.

The statement warned party functionaries and cadre of severe action if they expressed their views on party matters without forethought and without the approval of party high command. ‘By exchanging views we are not going to achieve anything,’ the statement said urging those taking part in media debates to highlight the achievements of the AIADMK government.

The party high command would discuss all key policy issues and stand on alliance democratically and take decisions that would reflect the sentiments of the cadre, the statement said. So, there was no need for causing any flutter and give opportunities for those who want to vanquish the party, it said.

In the past few days party functionaries with no background had been expressing their views and it had become a debating issue for others, it said and added that it should not happen again. Everyone would be bound by the decisions of the high command and the party would maintain a military like discipline on that as it had been the wont during the late J Jayalalithaa’s regime.