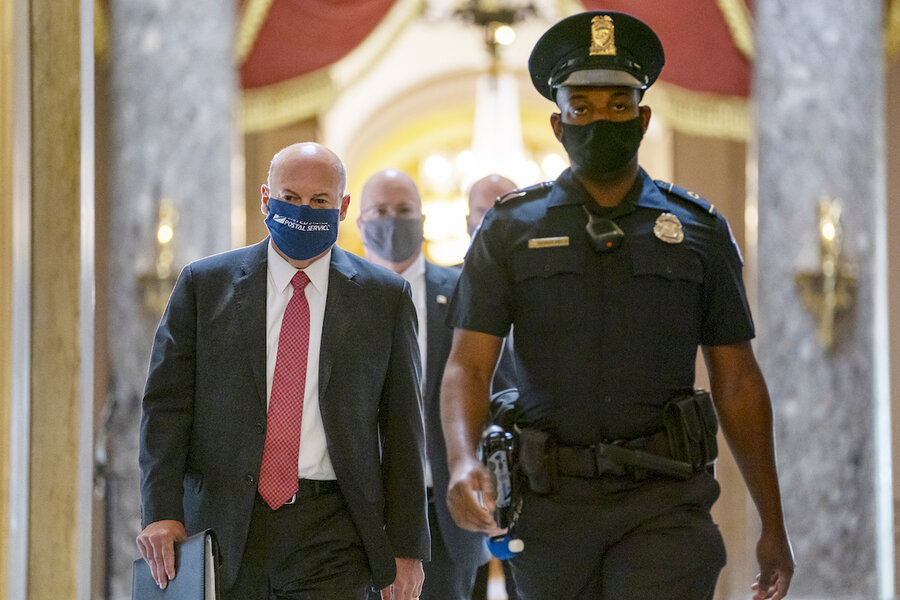 United States Postmaster General Louis DeJoy on Tuesday suspended all mail service changes until after the November election, bowing to an outcry by Democrats that the moves appeared to be an attempt to boost President Donald Trump’s re-election chances.

The reversal follows charges by Democrats and others that service cuts could slow the handling of mail-in ballots, the use of which is expected to skyrocket for the election as the coronavirus pandemic raises fears of crowds.

These critics have accused the Republican president of trying to hobble the Postal Service to suppress mail-in voting as he trails Democratic presidential challenger Joe Biden in opinion polls ahead of the Nov. 3 election.

Mr. Trump has repeatedly and without evidence claimed that an increase in mail-in ballots would lead to a surge in fraud, though mail-in voting has long been used in the United States. The Brennan Center for Justice in 2017 ranked the risk of ballot fraud at 0.00004% to 0.0009%, based on studies of past elections, according to The Associated Press.

Changes that threaten to slow mail delivery – and in some cases, already have – include reductions in overtime, restrictions on extra mail transportation trips, and new mail sorting and delivery policies, enacted in an attempt to cut costs.

“I am suspending these initiatives until after the election is concluded,” Mr. DeJoy said in a statement, adding that the changes are to “avoid even the appearance of any impact on election mail.”

Mr. DeJoy, a major political donor and ally of Mr. Trump, assumed the job in June.

He has faced pressure from multiple tiers of government, with the Democratic-controlled House of Representatives planning a rare Saturday session to pass a bill blocking cuts, and several states preparing lawsuits to block the maneuvers.

Mr. Trump kept up his attack on mail voting on Tuesday, speculating that delayed results could mean that the Nov. 3 election would need to be held a second time.

“It will end up being a rigged election or they will never come out with an outcome,” Mr. Trump told reporters on Tuesday. “They’ll have to do it again, and nobody wants that.”

One in four ballots in 2016 were cast by mail and Mr. Trump himself votes that way.

Mail boxes to remain in place

Mr. DeJoy also said that the Postal Service will not change retail hours at post offices, while mail collection boxes will remain where they are and no mail processing facilities will be closed.

“The Postal Service is ready to handle whatever volume of election mail it receives,” Mr. DeJoy said in a statement, according to AP.

The reversal followed a lengthy call by the postal board of governors on Monday night, two people briefed on the matter said.

Mr. Trump said last week he was against Democratic efforts to include funds for the Postal Service and election infrastructure in coronavirus relief legislation because he wanted to limit mail-in voting during the pandemic.

Earlier on Tuesday, states including Washington, Pennsylvania, Connecticut, and New York said they were planning legal moves to block the Postal Service changes.

“I’ll believe it when I see it,” Mr. Shapiro said. “Hopefully the American people can breathe a sigh of relief. But I will not let my foot off the gas so long as the postal officials continue to violate the law.”

House Speaker Nancy Pelosi on Tuesday said she would go ahead with plans to pass a bill that would prevent the post office from reducing service levels below what they were in January.

The top Democrat on the Homeland Security panel seeking Mr. DeJoy’s testimony, Sen. Gary Peters of Michigan, called the Postal Service “a lifeline” to Americans, according to AP.

The crisis at the Postal Service erupted as a major election year issue as Mr. DeJoy, a Trump ally who took control of the agency in June, has swiftly engineered cuts and operational changes that are disrupting mail delivery operations and raising alarms among workers.