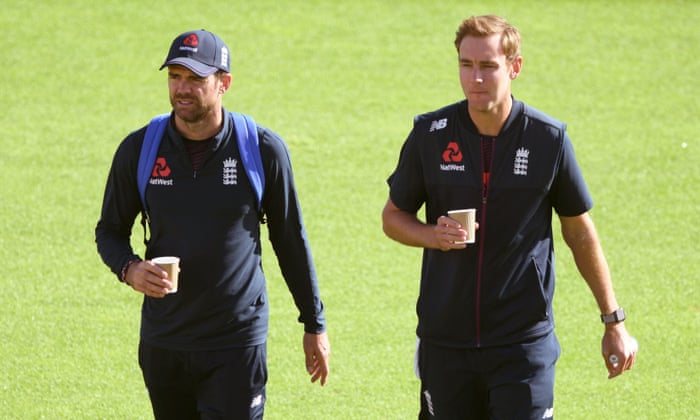 They refuse to go away; they refuse to stop. Quite why Duracell has failed to use Jimmy Anderson and Stuart Broad in its advertising campaigns remains a mystery.

At the beginning of this Test summer the talk was of rotation and there was the suggestion Anderson and Broad alternate in the team while lending their experience to the younger, quicker pacemen in the squad. Broad was omitted from the first Test team against West Indies, Anderson from the second. Since then they have played together in the next three and the strong expectation is that they will be paired again for Friday’s final Test, which will decide the outcome of the series against Pakistan.

This pair possesses many qualities but the outstanding ones this summer have less to do with their ability to make a ball swing or seam; it is their bloody-minded tenacity to keep going that astounds. They just want to keep playing.

This is a modern trait; players play longer in this era because they are so much better remunerated. In decades past some decided to give up aged about 30 to get a proper job and earn some proper money. However, this is clearly not the key motivation for this pair. They have earned well over the past decade but, crucially, they still love playing and they are still prepared to put in those anonymous hard yards to do it.

They remain canny operators on the field – and off it. After his omission from the first Test team against West Indies Broad gave an interview that was widely – and correctly – lauded, telling us candidly how he was hurt, angry yet still passionate to play.

After England’s defeat in that match they could hardly leave him out for the second Test and he duly delivered. In a less dramatic fashion, Anderson did something similar after the first Test against Pakistan, acknowledging he had had a bad game, scotching any rumours that he was considering giving up and emphasising how desperate he was to play the next match. Again, given those comments, it was tough for Joe Root as captain and Silverwood as coach to leave him out. So he played and he bowled well again.

Both are therefore likely to end up playing five of the six Tests. Conditions have suited them. The ball has darted around consistently in the air and off the pitch. This means the extra pace offered by Jofra Archer and Mark Wood is less essential. Sideways movement, rarely so prevalent outside England, reduces the need for speed through the air. Broad and Anderson may never be paired again overseas but at home that remains a possibility beyond the Rose Bowl this week.

Broad’s performances have been the most astonishing. He has even started scoring runs again but, more significant, he has taken 26 wickets for 319 runs in four Tests. This from a bowler who lacks express pace, whose away swinger to right-handers had long since disappeared (though it has occasionally resurfaced in these series) and who was not deemed to be in England’s best . Broad does not look like a great bowler. But he is.

Anderson’s output has been less spectacular this summer – nine wickets for 307 and he has yet to dismiss anyone in a second innings. But the ball is still swinging and in the last Test he was not flattered by his figures. Ask the Pakistan players, the opener Shan Masood in particular, whether or not they would like Anderson to be omitted and the response would be unanimous.

Batsmen are the same throughout the decades. Martin Crowe once confided how he was far more fearful of facing a bowler who never let him score rather than one who might deliver the unplayable ball. In this way Richard Hadlee and Glenn McGrath would torment like no others. Today that applies when Broad and Anderson are bowling – if there remains a bit of spice in the pitch.

Broad and Anderson will surely play and there is a very good chance Archer will replace Sam Curran. There will also be much staring at the weather forecasts as well as the pitch. The outlook is better than for the second Test, which is not saying much, and the longer the sun is likely to appear the greater the necessity for a specialist spinner, even though Dom Bess has played two Tests this summer without turning his arm over.

Pakistan are unlikely to change their side. It would be very harsh to ditch Fawad Alam, whose first Test innings for 11 years was a four-ball duck at Manchester, although they could just decide that conditions dictate the recall of their second leg-spinner, Shadab Khan.