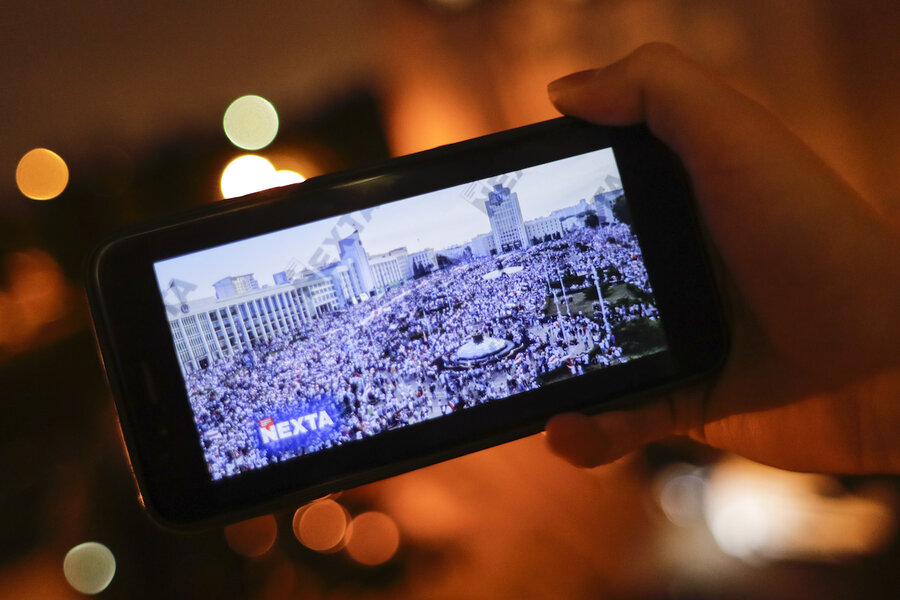 Every day, like clockwork, to-do lists for those protesting against Belarus’ authoritarian leader appear in the popular Telegram messaging app. They lay out goals, give times and locations of rallies with business-like precision, and offer spirited encouragement.

“Today will be one more important day in the fight for our freedom. Tectonic shifts are happening on all fronts, so it’s important not to slow down,” a message in one of Telegram’s so-called channels read Tuesday. “Morning. Expanding the strike … 11:00. Supporting the Kupala [theater] … 19:00. Gathering at the Independence Square.”

The app has become an indispensable tool in coordinating the unprecedented mass protests that have rocked Belarus since Aug. 9, when election officials announced President Alexander Lukashenko had won a landslide victory to extend his 26-year rule in a vote widely seen as rigged.

Peaceful protesters who poured into the streets of the capital, Minsk, and other cities were met with stun grenades, rubber bullets, and beatings from police. The opposition candidate left for Lithuania – under duress, her campaign said – and authorities shut off the internet, leaving Belarusians with almost no access to independent online news outlets or social media and protesters seemingly without a leader.

That’s where Telegram – which often remains available despite internet outages, touts the security of messages shared in the app and has been used in other protest movements – came in. Some of its channels helped scattered rallies to mature into well-coordinated action.

The people who run the channels, which used to offer political news, now post updates, videos, and photos of the unfolding turmoil sent in from users, locations of heavy police presence, contacts of human rights activists, and outright calls for new demonstrations – something Belarusian opposition leaders have refrained from doing publicly themselves. Tens of thousands of people all across the country have responded to those calls.

In a matter of days, the channels – NEXTA, NEXTA Live, and Belarus of the Brain are the most popular – have become the main method for facilitating the protests, said Franak Viacorka, a Belarusian analyst and non-resident fellow at the Atlantic Council.

“The fate of the country has never depended so much on one [piece] of technology,” Mr. Viacorka said.

In the days following the vote and the subsequent internet outage, NEXTA Live’s audience shot from several hundred thousand followers to over 2 million. Its sister channel NEXTA has more than 700,000 followers. Belarus of the Brain’s following grew from almost 170,000 users in late June to over 470,000 this week.

Their influence in a nation of 9.5 million is hard to underestimate, and authorities have taken notice and are pursuing those behind the channels.

Last week, officials opened a criminal probe into NEXTA and its founder, blogger Stepan Putilo, on charges of fomenting mass riots – an offense punishable by up to 15 years in prison. Blogger Igor Losik, who founded Belarus of the Brain, was arrested before the election, but the channel continues to operate.

“We have indeed become the bullhorn of the situation that is unfolding in Belarus right now,” Mr. Putilo, who is Belarusian but lives in Warsaw, Poland, said in a recent interview with Lithuanian news outlet Delfi. “We have become the voice of this revolution, but by no will of our own. It just happened.”

Mr. Putilo first created NEXTA — which is pronounced NEKH-ta and means “somebody” in Belarusian – as a YouTube channel in 2015, when he was just a teenager. His profile rose last year when his 30-minute video about the country’s iron-fisted leader, “Lukashenko. Criminal Records,” was viewed almost 3 million times. A court in Belarus declared the film extremist, but it is still available on YouTube.

Mr. Putilo turned to Telegram in 2018. His two channels focused mostly on Belarusian politics. His team received thousands of messages from users sending in photos, videos, and news items each day and posted the most newsworthy, taking pride in often sharing information from sources inside the government or law enforcement.

After the demonstrations began, thousands of messages turned into hundreds of thousands, and the underground operation now appears inundated. In response to a request from The Associated Press for an interview, NEXTA editor-in-chief Roman Protsevich wrote: “Sure, it’s possible, but the question is when. …” – and then stopped responding.

When the protests began, the NEXTA channels were often the first places anywhere on the internet to carry grisly pictures of police violently clashing with demonstrators. This week, they were filled with videos of workers protesting at industrial plants.

Journalists in Belarus have praised the channels for breaking news – but note that traditional media also played an important role.

Social media platforms have played major roles in previous uprisings, including in the Arab Spring, anti-government protests in Hong Kong, and demonstrations against racial injustice in the United States.

But, since 2016, when Russia was accused of using Facebook and other platforms in an effort to influence or interfere in the U.S. election, many have seen social media in a more dystopian light, said Hans Kundnani, senior research fellow at London-based think tank Chatham House.

“What’s happening in Belarus right now is kind of a reminder that actually social media can be used in a positive way from a democratic perspective,” Mr. Kundnani said.

Protesters in the streets echoed his sentiment.

“Telegram channels and websites that don’t belong to our government are the main source of information today as we cannot at all rely on state media,” said Roman Semenov, who follows the NEXTA channels and joined a rally in central Minsk on Wednesday evening. “It’s a Telegram revolution.”