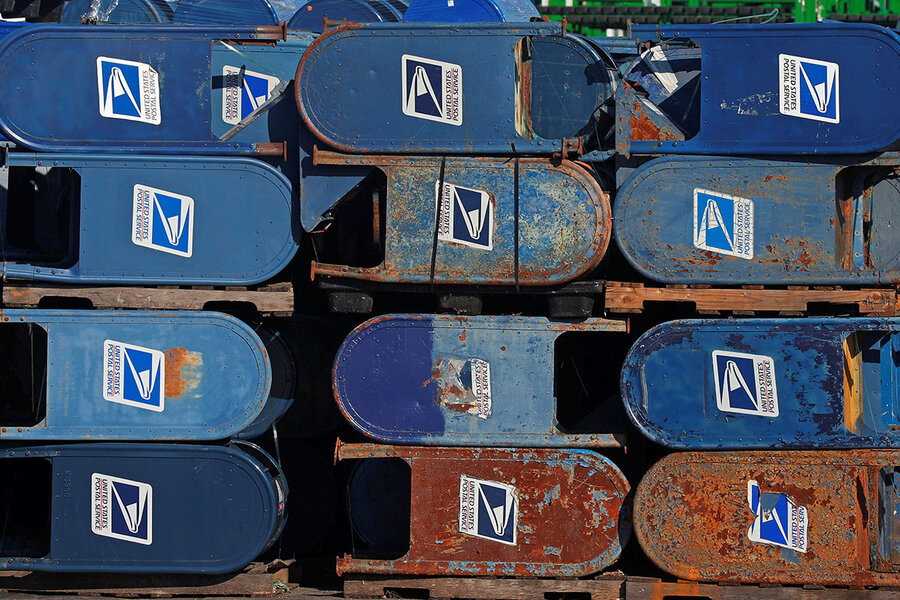 After weeks of mounting pressure, U.S. Postmaster General Louis DeJoy on Tuesday said he would postpone new cost-cutting measures that had sparked concerns many mail-in ballots would be delivered too late for November’s election. The announcement came as more than 20 states were reportedly planning to sue the United States Postal Service (USPS), and just days before Mr. DeJoy was set to testify before Congress.

“To avoid even the appearance of any impact on election mail, I am suspending these initiatives until after the election is concluded,” said Mr. DeJoy in a statement, adding that there would be no closures of mail processing facilities and overtime would be approved as needed. “The Postal Service is ready today to handle whatever volume of election mail it receives this fall.”

The brouhaha and the postmaster general’s decision to back off underscored how challenging the administration of this election is likely to be. Years of USPS financial troubles, compounded by the pandemic, are coming to a head, with Democrats in Congress seeking an emergency infusion of $3.5 billion for mail-in voting and $25 billion for the organization as a whole. Observers worry that a surge in voting by mail, together with already tight state deadlines for submitting ballot applications, could overwhelm the system.

The debate has become highly politicized, especially after President Donald Trump suggested that withholding USPS funding would prevent universal mail-in voting, which he has alleged – without providing evidence – would be fraudulent.

A failure to deliver or count mailed ballots could disproportionately disenfranchise Democrats, who favor voting by mail in higher numbers than Republicans this year, according to polls. It could potentially be enough to tip the outcome in a key swing state, or even the whole country. In the 2018 election, when about a quarter of voters submitted their ballots by mail, the top reason ballots were rejected was because they were late. As voters turned to mail in record numbers this primary season, as many as 1 in 5 of those ballots in New York City were not counted, due in part to delivery delays or envelopes not being postmarked.

“That is an enormously unacceptable disenfranchisement rate,” says Hans von Spakovsky, manager of the Election Law Reform Initiative at the conservative Heritage Foundation, who notes that turnout in primary elections is typically well below that of general elections.

Often lost in the debate is bipartisan agreement that the postal service needs reform, says Ray Smock, who formerly served as the historian of the U.S. House of Representatives.

“We are in a political situation where [parties] think success comes from winning, not from serving,” says Dr. Smock. “The essential nature of American politics, when it works, is it has to be oriented toward problem solving, not political gain.”

Since Benjamin Franklin served as the first postmaster general, the USPS has grown to an organization of more than 600,000 employees that pays $2 billion in salaries and benefits every biweekly pay period. In 2019, it would have ranked as the 44th  largest Fortune 500 company. That year, its employees traveled the equivalent of 53,640 times around Earth to deliver mail – including via a mule train to reach Havasupai tribe members at the bottom of the Grand Canyon. The carrier with the longest route travels more than 190 miles a day to bring mail to just 272 boxes in Sidney, Montana.

If all this sounds expensive, it is. From 2008 to 2018, it lost $68 billion. By the end of fiscal year 2018, it was earning less than half of what it owed each year, according to a report from the General Accounting Office, although it has been chipping away at its unfunded liabilities. Part of the burden stems from a congressional mandate to prefund its retirement health benefits, rather than pay as it goes. Those financial woes were compounded by the COVID-19 pandemic. Mr. DeJoy, who previously ran a private logistics company, was brought in to put its finances in order.

His move this summer to take some mail sorting machines out of circulation in order to make room for parcel processing, along with a policy of cutting back on overtime, raised concerns that he was reducing capacity for an already strained organization. Industry partners were left scratching their heads about why the Postal Service didn’t consult with them ahead of time, as it has often done in the past, says Art Sackler, a lawyer and lobbyist on postal and other issues for many years, and the manager of the Coalition for a 21st  Century Postal Service, an industry coalition on Capitol Hill.

After Mr. DeJoy’s announcement, Mr. Sackler said he was encouraged that the USPS would return to how it has always handled ballot mail, and concerns about timely processing and delivery could be put aside.

“USPS does need more focus on costs and efficiency, though, so turning back to potential operational changes after the election seems to make some sense,” he added. “This time we would urge the postmaster general to be more transparent and to consult with his stakeholders in advance of reimposing any of these changes or instituting new or additional ones.”

But Norman Ornstein, a resident scholar at the conservative American Enterprise Institute in Washington, D.C., says he had a hard time accepting Mr. DeJoy’s statement at face value – noting, for example, that he did not say he would put back all the sorting machines that had already been removed.

“There are too many other ways in which he can act to add impediments to the delivery of mail ballots,” says Dr. Ornstein, who studies politics, elections, and the U.S. Congress. “ ‘Trust, but verify’ is about as far as I would go.”

A larger concern for Democrats beyond the logistics of mail-in voting, is that Mr. Trump is laying the groundwork to claim the election was illegitimate if he loses.

“Trump and company have succeeded in getting into people’s heads serious doubts about the reliability of mailing your ballot, which in and of itself is potentially disruptive,” says Democratic Rep. Gerry Connolly of Virginia, a senior member of the House Oversight Committee, in an interview with the Monitor.

Speaker Nancy Pelosi recalled the House from its August recess for an emergency vote on a postal reform bill – which would reverse Mr. Dejoy’s recent changes, mark all mailed ballots as first class, and infuse $25 billion into the struggling agency. Many states mail ballots at a cheaper rate, which can take longer.

Mr. Dejoy has agreed to testify Friday before the Senate Homeland Security and Governmental Affairs Committee, which is chaired by Ron Johnson, a Wisconsin Republican and ally of the president. On Monday, he is scheduled to testify at a hearing organized by the House Oversight Committee, which is chaired by New York Democrat Carolyn Maloney, whose primary challenger, Suraj Patel, joined a lawsuit this summer after more than 12,000 absentee ballots were disqualified. As of early August, he was trailing her by 3,700 votes.

Though some Republicans have voiced frustration with the mail delays, the Democrats’ bill is expected to pass along party lines in the House and sputter in the Senate. The lack of consensus – like so much else this year – is largely a product of entrenched partisan narratives.

The USPS is the only government service mandated by the Constitution, and remains the most popular government agency, with a 91% favorability rating according to a Pew Research Center poll earlier this year.

Yet solving the problems of the USPS is a herculean task, says Tom Davis, a former Republican congressman from Virginia who chaired the House Oversight Committee, which supervises the postal service.

“Congress only acts after the fact,” he says. “There’s no reward in tackling the problem ahead of time.”

The result of that political procrastination is a last-minute attempt to right an agency that’s been ailing for decades, just weeks before early voting begins. Congress, says Mr. Davis, is showing up years late and billions of dollars short.

For the past 30 years, virtual communication has increased, and first-class mail – a large source of USPS revenue – has decreased. Mail volume is down 33% since 2006, with customer visits also dropping off significantly, according to a Wall Street Journal editorial that quipped, “It’s a Blockbuster service in a Netflix world.” USPS’s own board of governors requested $25 billion in relief earlier this year.

Mr. von Spakovsky of the Heritage Foundation argues, however, that more money is not the answer. Rather, better management is what’s needed.

“Folks are using this COVID-19 crisis to say we need to give more money to the Postal Service,” he says. But “if they had all the money they could possibly desire … I don’t think they could handle the huge increase in volume that people are pushing for for the November election.”

A protest in Massachusetts

The Post Office controversy has struck a nerve for many citizens across the country, prompting local news coverage and protests. In Lynn, Massachusetts, a working-class city up the coast from Boston, several dozen people gathered on the steps of the Thomas P. Costin, Jr. Post Office at lunchtime on Tuesday.

Mr. Costin himself, a former mayor of Lynn and postmaster for 31 years who is now in his 90s, even made an appearance. “Without the Postal Service, we wouldn’t have the country we have today,” he said.

At one point, a counterprotester interrupted Mr. Costin’s short speech. But as other local officials spoke, including U.S. Rep. Seth Moulton, a retired Marine officer and former presidential candidate whose office organized the rally, cars drove by slowly and honked in solidarity.

“I came today because this is unacceptable,” says Shelby Jones, who has lived in Lynn all his life. By trying to block mail-in voting in the middle of a pandemic, Mr. Jones says, the president is signaling that he doesn’t care about citizens. “I don’t care if you’re Republican, Democrat, Independent – it’s an assault on the United States Postal Service. [President Trump] didn’t start this until he felt that he was getting down in the polls.”

Nicole Werth, an artist who came with her accountant husband on a lunch break, supports mail-in voting as a more accessible option. “I’ve been disappointed when we have voted in the past – I mean, how low the counts are when we go to submit our ballots,” she says. “So this would provide opportunity if you have to work, or you need child care, or whatever the case may be, that you’re able to do it on your own time.”