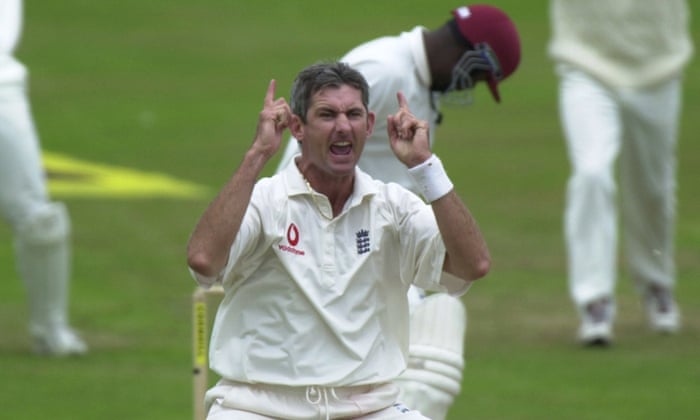 Before England’s second match against Pakistan 4,938,971 deliveries had been bowled in the history of Test cricket, equivalent to 823,161 (and a bit) six-ball overs, and of those only six have featured four wickets. About a quarter of one percent of the 2,392 Tests to have been played have had a four-wicket over, falling to only a tenth of a percent of the 912 Tests played since the turn of this century. Weirdly, three of those six four-wicket overs were bowled at Headingley, where Test bowlers are more than 15 times more likely to take four wickets in an over than anywhere else.

This Tuesday marks the 20th anniversary of the last time it happened, at Headingley or anywhere else. Andy Caddick was the bowler, a player who, just a few months from his 32nd birthday, was in the best form of his international life. Given his debut in 1993 under the captaincy of Graham Gooch, Caddick had been in and out of the side under his successor, Michael Atherton, and entirely out of the side under Alec Stewart, but his international fortunes were transformed by the near-simultaneous arrivals of Nasser Hussain as captain, Duncan Fletcher as coach, and central contracts.

“You’d come into the team, and if you didn’t perform you were out again,” recalls Caddick, who now runs a company that sells aircraft, of life before central contracts. “Selectors at the time weren’t thinking of longevity, they were thinking of results. You don’t get results without thinking of longevity, and without players understanding the game at that level. It tended to be that you played a game, if you didn’t play well you were discarded, and you came back when all the rest had been discarded. It was a difficult time because as players you couldn’t perform and relax. There was always pressure on you, from the opposition, from yourself because you knew your position was under pressure, and from the selectors.

“Then contracts came in and you signed a contract for a year. That meant you became part of the England squad, therefore you were in the team. There would be rotation, but you were going to be involved. The contracts were massive. Suddenly you were able to relax, you knew the captain and coach were backing you and your teammates were backing you, and everyone could work together. After that we were all in it together. It became a much more relaxed atmosphere, and for the first time I just did what I did for Somerset – give me the ball and I’ll bowl. I just enjoyed bowling.”

Caddick’s place in the side was at least temporarily settled the previous winter, when he took seven first-innings wickets in a drawn Test in Durban, and he had followed that up with a decisive contribution to England’s victory in the second Test against West Indies at Lord’s, when with England already one down in the series and trailing by 133 runs after the first innings the tourists were skittled for 54, Caddick taking five including the key wicket of Brian Lara.

“You couldn’t dwell on names. At the end of the day it’s just a batter. You’ve got to conquer reputation,” says Caddick. “I bowled a lot at Lara, bloody good player. I played against some seriously good players and Brian I think was top of the lot. But whatever the names are on the sheet you have to deal with them. Duncan was very good at analysing the opposition and finding weaknesses, which is something we didn’t do a lot of prior to him coming on board. There was a lot of video analysis, trying to work out where to put fielders when batters come in. You’re just trying to find a weakness, and some players didn’t have many, and then hope the batsman has a bad day.” 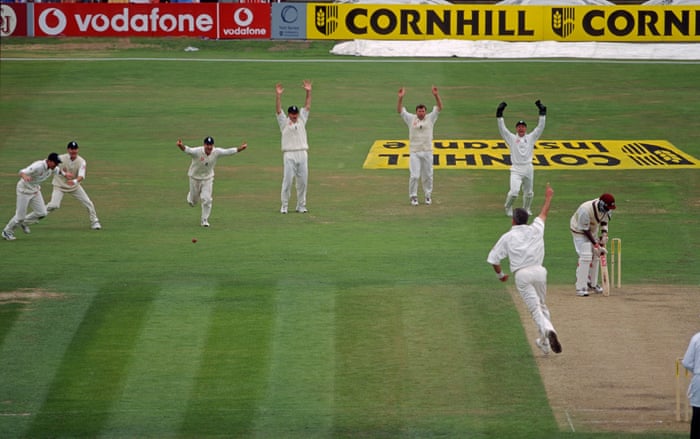 And so to Headingley, the fourth Test in the series with the teams level at 1-1 after a draw at Old Trafford. England were precisely 100 ahead after the first innings, but the game remained in the balance as West Indies came out for their second knock. Not, however, for long. Adrian Griffith was bowled by Darren Gough for a duck in the third over with the score on three, and Wavell Hinds followed next ball. A couple of overs later came the big one, Lara lbw to Gough for two, and West Indies were 11 for three. Gough also dismissed the other opener, Sherwin Campbell, in the 11th over, and at tea the score was 23 for four. Dominic Cork broke the biggest partnership of the innings, such as it was, between Jimmy Adams and Ramnaresh Sarwan, when Adams dragged on. Enter Caddick.

Ridley Jacobs was trapped lbw off the first ball of the 23rd over, then Nixon McLean bowled off the third and Curtley Ambrose off the fourth. For the hat-trick ball England had five slips, two gulleys and a short leg, but Reon King survived. A no-ball later King, the only right-hander in the group, also lost his off stump. 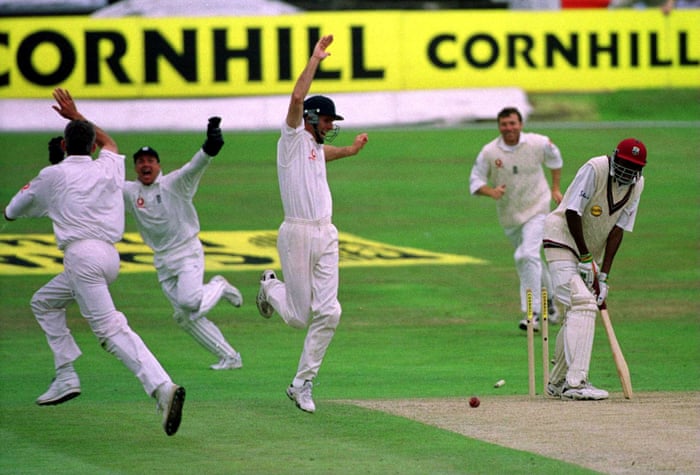 “What you try to do all the time as a bowler is do the basics right. I think too many bowlers these days try to bowl 15 different deliveries; I was always trying to bowl the same ball every time – hit the top of off. Whether it’s over the course of a spell or over a number of spells, you try to achieve the same thing. That day the conditions were perfect, the ball was swinging, and you just had to let the ball do the work. It really helps a swing bowler to bowl at left-handers – the wicket is always in play, lbw is always in play, so that was always going to help. In that over it just clicked.”

Courtney Walsh was the last to fall, also bowled by Caddick, and the bowler finished with figures of five wickets for 14 off 11.2 overs. West Indies were bowled out for 61, and victory at the Oval in the final Test saw England seal the series. “As far as I was concerned Lord’s was key,” he says. “We were looking down the barrel of a series defeat there and it turned the game around. I think it was more important than Headingley in the context of changing the series.” When it came to making history, however, Caddick, like two of the other members of the select club he joined that afternoon in 2000, had to leave it until Leeds.