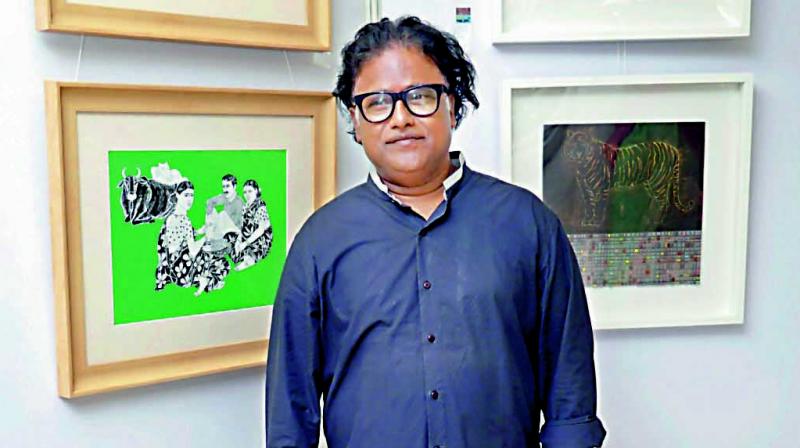 The art fraternity in Hyderabad came together for a three-day online art auction, ‘Art in Isolation’, organised by the Kalakriti Art Gallery. The charity auction involved 35 original artworks by 27 Hyderabad-based artists.

The idea behind the online event was to ‘give back to society’ at a critical time such as this. The entirety of the collected money will be given to the Chief Minister’s Relief Fund.

We spoke to Rekha Lahoti, founder, Kalakriti Art Gallery, to understand what motivated her to undertake the auction despite the current scenario in which people are not soending on anything let alone in a niche space such as art.

“As an art gallery, we had, for a while now, been contemplating on what could be done for society. But the idea of having an online auction germinated 25 days before the lockdown was announced,” Rekha tells us.

“Even the artists came forward with similar thoughts, so we decided to collaborate.”

Rekha tells us how she, like anyone else, was initially skeptical about the outcome of the auction given the economic scenario. “But I had faith in those who love art and are passionate about charity,” adds Rekha.

The auction brought in around `5 lakh, which will go to the CM’s Relief Fund. “Neither the gallery nor the artists will keep anything from the proceeds. The amount is being set aside for the relief fund to fight COVID-19,” announces a proud Rekha.

Art in the time of covid

One of the participating artists, Laxman Aelay, also talked about giving back to society. “As a citizen of India, this is a contribution from my side as part of my own social commitments,” he shares.

“It’s not only about the money, but also about contributing one’s art for social cause. We’ve never seen or heard of such a pandemic situation. And while it’s indeed hard for many, we need to all come out and help as much as we can, in whatever ways we are capable of. For us, as artists, art is what we know.”

However, not all art patrons feel alike. Art lover, entrepreneur and well-known art promoter in the Hyderabad art circuit Sheetal Bangur, chose to give the auction a miss.

“Right now, with all that’s happening in the world and in India, I don’t think anyone can be thinking of collecting or buying art. At least I know I am not,” she says, adding that she would prefer not to mix charity with art.

Anju Poddar, another art connoisseur from the city, also said that buying art is her least priority currently. “Whatever little money I have and can donate, I would prefer giving it to the people who work for me and my family. Even though collecting art is a passion, given the current scenario, I am keeping that under check,” shares Anju.

However, some art lovers did happily go in for the purchase given the price cut of around 30 per cent on all the artworks (ranging from `10,000 to `3.8 Lakh). Madhavi Chalasani, a nutritionist and fitness enthusiast, is one such bidder who bought an acrylic on canvas by L. Saraswathi.

“When Rekha invited me for the online art auction, I tried to keep away from it initially because of the economic scenario. But when I heard that all the proceedings will go to charity, I thought of buying a piece of art for my love for art and to give back to society, all with a single click. I bought the one by L. Saraswathi as her work is not mainstream.”

Tired all the time? Here’s how to stay energised

Sharp increase in destruction of virgin forest in 2020

4 easy exercises you can do while the kettle is boiling