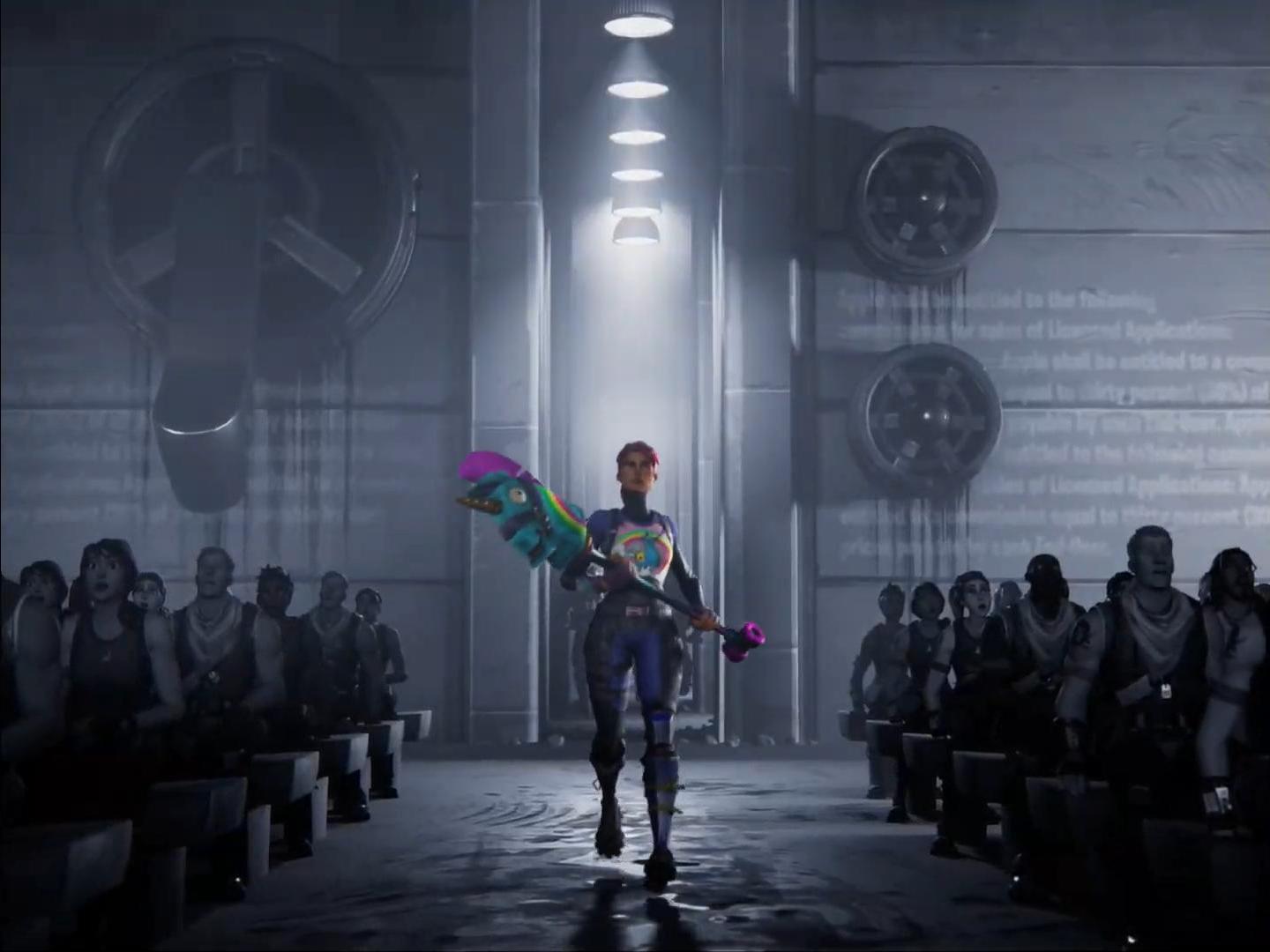 The video is not only an attack on the company’s app store policies and the decision to ban Fortnite from the app store, but also parodies an ad that is central to the way the world sees Apple, and how it sees itself.

It mocks Apple’s famous ‘1984’ ad – arguably the most famous and well-regarded commercial of all time – in which the company positioned itself as crusaders against conformity and the means of achieving freedom.

Fortnite used the parody to suggest that it had given up on this principle, and that it was now the kind of corporate behemoth that it intended to attack with the ad. (Epic Games makes billions of dollars a year through Fortnite, and itself is one of the biggest companies in the world.)

The ad was released after Apple – and later Google – banned Fortnite from their app stores over a new update that they said broke their rules. The update allowed users to circumvent the app stores’ payment systems, which charge a 30 per cent cut to the developers who use them, bypassing fees for both players and developers.

The decision has led to a very public and expensive fallout between the three companies: Epic Games has since sued both Google and Apple, released a variety of information attacking them, and the campaign could lead to fundamental changes in app store policies that have already received sustained criticism.

Perhaps the most spectacular of the various attacks that Epic Games has launched is its parody of the 1984 ad. The developers borrowed the narrative and the style of Apple’s famous ad and turned it back on the company.

Unlike the original ad, it is not a representation of the Macintosh computer coming to put a stop to the dystopia of Big Brother. Instead, it is a character from Fortnite attempting to destroy the app store policies that developers say are unfair.

“Today, we celebrate the anniversary of the platform unification directives,” an apple, doing the job of Big Brother in the original video, says in the ad. “For years, they have given us their songs, their labour, their dreams. In exchange, we have taken our tribute, our profits, our control. This power is ours and ours alone. We shall prevail.”

The wording is almost identical to the original Apple ad, which talked about “Information Purificatio Directives”, and was generally less pointed than Fortnite’s version.

“Epic Games has defied the App Store Monopoly. In retaliation, Apple is blocking Fortnite from a billion devices. Join the fight to stop 2020 from becoming ‘1984’,” the Fortnite version reads at the end.

Apple’s version had similar wording, though again it did not explicitly name the enemy it was planning to take on. “On January 24th, Apple Computer will introduce Macintosh. And you’ll see why 1984 won’t be like 1984,” it read.

Throughout, the video is a fairly direct parody of Apple’s own 1984 ad. That version was not only a reference to the dystopian book, but the fact that the ad did actually air in 1984, at that year’s Super Bowl.

The ad was not only a tremendous success but helped cement the story that Apple told about itself to the world. The depiction of the company as a plucky upstart that allowed people to take on a staid and grey world is one that continues to run through its ads today, and is central to the way the company considers itself.

Epic Games also aimed to do the same with Google, though not in quite so spectacular style. After it was kicked out of the app store on Android, too, Fortnite sued Google and said that it was reneging on his famous motto “don’t be evil”.

Earth is 2000 light-years closer to a supermassive black hole

Scientists make major breakthrough in finding out why the Sun shines

Your Xbox could soon just be an app on your TV, Microsoft says