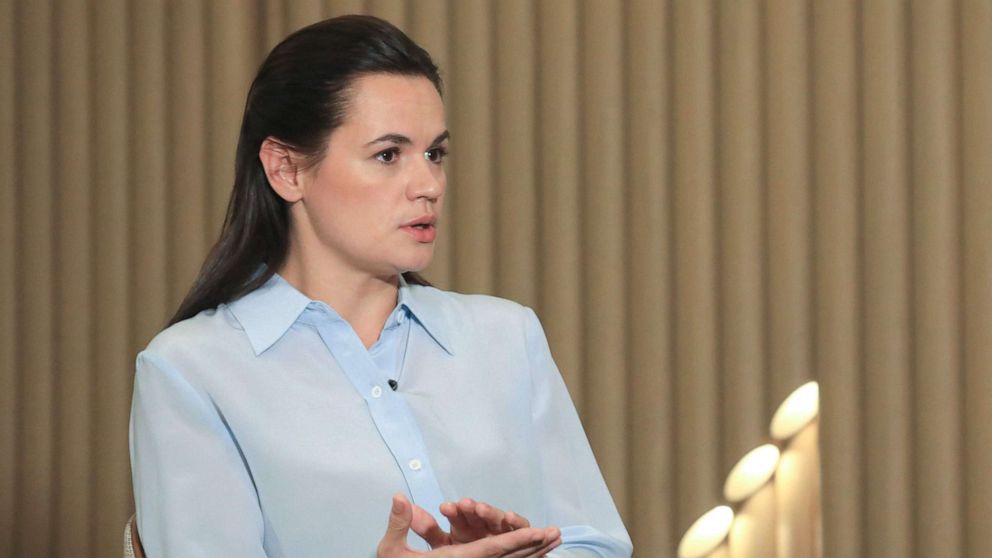 The head of the opposition in the recently disputed Belarus elections, Svetlana Tikhanovskaya, never believed that she would be at the center of the world stage after challenging President Alexander Lukashenko in an Aug. 9 election that has been dismissed as illegitimate by most independent observers.

“I stood instead of my husband, who was jailed and couldn’t run for this election. And step by step I turned out to be in his place,” she told ABC News Senior Foreign Correspondent Ian Pannell in her only interview with an American TV network.

Following the election and resulting protests, Tikhanovskaya and her two children fled to neighboring Lithuania due to fears for her safety. From there she continues to encourage her supporters to demonstrate against the election results, which officially gave her less than 10% of the vote. She issues almost daily video messages that are distributed on social media urging civil protests and strikes. Her team says that they are coordinating creative daily events to keep the pressure on Lukashenko and continue to call for large peaceful rallies.

In her new role, she continues to field calls from world leaders. On Sunday, she will meet with the second-highest ranking American diplomat, Deputy Secretary Stephen Biegun. He is stopping in Vilnius, Lithuania, on his way to Moscow to discuss the ongoing crisis from which Tikhonovskaya says there is no retreating from.

“The Belarusian people have woken up and they are ready to change this system for better living,” she told ABC News. “They want to live in a country where they have rights, rights to speak, rights to stand, rights to clap, right to choose, to elect a president they want.”

When asked what she wanted specifically from the United States administration, she said that she is now only in the position to ask for moral support from the country that she considers one of the oldest democracies in the world.

“I think I have only the right to ask for vocal support, but if [President Donald Trump] will find, will consider, that they can help us in any other way, we would appreciate help in our case,” she told ABC News.

Trump has said little about the protests and disputed election, but called the situation “terrible” speaking to reporters before departing for Minnesota and Wisconsin on Monday.

The ongoing protests have posed the biggest threat yet to the 26-year reign of Lukashenko, often referred to as the “last dictator in Europe.” Initially the regime sent security forces to brutally suppress the protesters, jailing thousands.

“I have always talked about peaceful and legal ways for defending our voices. We did not expect from our police that they would behave like this, that they would beat our peaceful people like this. When I saw all those pictures at the beginning of the demonstrations they were awful. I really can’t believe that the Belarusian police could beat the Belarusian people in such a cruel way,” Tikhonovskaya said.

But despite some suggestion that the strong-arm tactics of shutting down factories and replacing striking workers was dampening opposition spirts, Tikhonovskaya is confident that they will be successful in forcing the only president she has ever known out of power.

The former English school teacher, who had to suddenly step into the world spotlight, is uncertain how Russia will respond to any change of administration in Minsk. President Vladimir Putin and Lukashenko have been at odds many times, but the two countries remain close because of bilateral security and political treaties.

Asked whether the flurry of recently reported telephone conversations between Putin and the Belarusian president concern her, Tikhonovskaya said, “I don’t know about the peculiarities of the conversation but I always call for, as I have already said, we call on all the countries to accept the sovereignty of Belarus and I am sure all the leaders will hear this message.”

She is confident that Lukashenko will need to bow to the will of the people and step aside for the benefit of all Belarusians.

Pressed on whether the opposition will be able to sustain the resistance, she was confident.

“There is possibility to change. Yes. Through all these years we were convinced that nobody else could rule this country; we will not survive if another president will come,” Tikhonovskaya said. “And all these years we lived under the pressure of this one person. But we did it this year.”