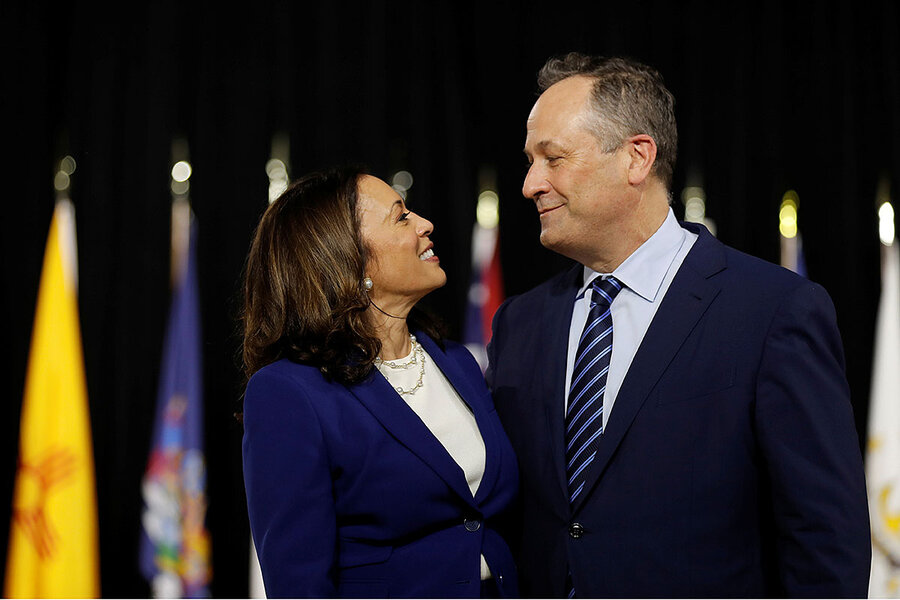 Usha Haley was surprised at the depth of her own reaction when she heard that Sen. Kamala Harris would be the Democratic Party’s nominee for vice president.

An accomplished economist whose centrist politics sometimes tend to the right, Dr. Haley says her response was “really an emotional one,” since there are a number of policy positions she does not share with the former California attorney general.

But as a religious Hindu and Indian American who has been married to an Irish Catholic man for 35 years, she saw in Senator Harris’ life many of the same facets of her own – not only as a woman of color and an immigrant, but also as someone in an interfaith and culturally mixed family.

“I just felt elated in a way that’s hard to explain,” says Dr. Haley, who holds the W. Frank Barton Distinguished Chair of International Business at Wichita State University in Kansas. “I tweeted everyone I knew, and I even called my mother,” who lives in India.

Democratic presidential nominee Joe Biden has said he views himself as a “transition candidate” who would bring a new generation of leaders into his administration. His decision to tap as his running mate the first Black woman and person of Asian descent to appear on a major party’s presidential ticket is a nod to the growing diversity that now defines the Democratic Party. And the complexity behind those specific identities – namely, Senator Harris’ multicultural and interfaith background – reflects a growing reality for many Americans, as the country becomes less white, less Protestant, and less defined by organized religion in general.

“She is something that many of us now are,” says Samira Mehta, a professor of women and gender studies and Jewish studies at the University of Colorado Boulder. “She is a person who has navigated a complicated, multi-religious landscape and has then identified with a specific community, even while drawing from and incorporating other aspects of her life into that identity [as a Black American].”

The senator’s mother, the late biologist Shyamala Gopalan, was an immigrant from India and a Hindu, who married Jamaican-born scholar and Stanford economist Donald Harris. Senator Harris is now married to Los Angeles attorney Douglas Emhoff, a Jewish man from Brooklyn.

It’s an increasingly common portrait. Since 2010, nearly 5 of 10 Americans who have married have joined a spouse of a different religious group, according to Pew Research’s 2015 Religious Landscape Study – doubling the percentage of interfaith marriages 50 years ago. Overall, about 20% of U.S. adults today say they were raised in a mixed religious household.

“Just by her experience of navigating these many different religious identities, not to mention different cultural identities, Kamala Harris had real life practice in what it means to be part of the American interfaith experiment,” says Paul Brandeis Raushenbush, senior adviser for public affairs and innovation at Interfaith Youth Core, which partners with U.S. colleges and universities to foster interfaith cooperation and leaders in an increasingly pluralistic society.

“In some ways she represents a very time-old American tradition of different people coming together to meet one another in a new location and forging something new,” continues Mr. Raushenbush, whose great-grandfathers include the famous Protestant theologian Walter Rauschenbusch, who pioneered the social gospel movement, and Louis Brandeis, a Jewish Supreme Court justice and one of the nation’s most influential legal minds.

Over the course of her career, Senator Harris has not always emphasized her culturally mixed background. She’s said that she never put too much thought into how to categorize herself and has never liked being wedged into “this box or that box” of racial or ethnic groups, preferring to call herself “a proud American.” A number of her friends told The Washington Post that they were even unaware that she had a heritage from South Asia.

“[When] I first ran for office, that was one of the things that I struggled with,” she said in 2019. “You are forced through that process to define yourself in a way that you fit neatly into the compartment that other people have created.”

Despite the different traditions informing her background, in many ways the Democratic vice presidential nominee simply sees herself as a Black American. After her parents divorced when she was a young girl, her mother raised her and her younger sister, Maya, within the Black middle-class communities in Oakland.

“From almost the moment she arrived from India, she chose and was welcomed to and enveloped in the Black community,” Senator Harris wrote of her mother in her 2019 memoir, “The Truths We Hold.”  “It was the foundation of her new American life.”

“My mother understood very well that she was raising two Black daughters,” she wrote. “She knew that her adopted homeland would see Maya and me as Black girls, and she was determined to make sure we would grow into confident, proud Black women.”

Both her parents enveloped them in civil rights activities, protests, and salon-like social gatherings where adults “devoured” Black writers overlooked in their educations, including Ralph Ellison, Carter G. Woodson, and W.E.B. Du Bois.

Her mother exposed her daughters to her Hindu faith, bringing them to India on numerous occasions to meet their extended relatives and experience Hindu worship. But she also decided to ground her daughters in Christianity, sending them each Sunday with a family friend to attend Oakland’s 23rd Avenue Church of God, a denomination with Pentecostal roots, where they sang in the children’s choir.

“My earliest memories of the teachings of the Bible were of a loving God, a God who asked us to ‘speak up for those who cannot speak for themselves’ and to ‘defend the rights of the poor and needy’,” Senator Harris wrote in her memoir. “This is where I learned that ‘faith’ is a verb; I believe we must live our faith and show faith in action.”

Such grounding in the Bay Area’s Black communities led her to travel east to attend college at Howard University in Washington, D.C., the historically Black university with a rich tradition of legal scholarship and civil rights activism.

This was a very significant decision, says Dianne Pinderhughes, a professor of political science and Africana studies at the University of Notre Dame, since both Senator Harris’ parents as well as her sister, Maya, received degrees from the University of California, Berkeley.

“She chose to set out on her own to go to Howard, wanting to be closer to its traditions in the law and become a lawyer, like Justice Thurgood Marshall” – a Howard alum whom Senator Harris has called one of the inspirations of her youth. “And she didn’t just attend Howard, she became very much a part of its social networks,” Dr. Pinderhughes adds.

Responding to persistent questions about her “Blackness” as the daughter of two foreign-born American immigrants – including “birther” questions about her eligibility for the presidency that have gained new traction on the right despite having no legal basis – Senator Harris said during a radio interview last year, “I’m Black, and I’m proud of being Black.”

But it’s the various threads woven into the tapestry of that identity that make Senator Harris’ experience increasingly relatable to many.

Dr. Haley, for example, navigates her own family’s traditions in a fluid way – saying her Sanskrit prayers in the morning but also attending Roman Catholic mass with her husband and 5-year-old daughter. “With our child, she’s exposed to both, and I’m hoping to expose her to Buddhism and Judaism as well, because we’re friends with people from so many different walks,” she says.

Dr. Mehta has had a similar experience. Her father’s family background is steeped in Hindu traditions, but her mother was part of a complicated family that included Unitarian, Presbyterian, and Jewish roots.

“So I grew up as a little kid celebrating both Diwali [the Hindu festival of lights] and Passover,” says the University of Colorado Boulder scholar whose book, “Beyond Chrismukkah: Christian-Jewish Interfaith Families in the United States,” explores the long history of such families. She ultimately decided to embrace her Jewish roots, formally convert, and become a scholar in the field of Jewish studies. “I would say identity is still a lot more complicated than simply a collection of ethnic or religious fractions – it’s also a part of the choices you make.”

For Mr. Raushenbush, the process of shaping an identity is enhanced by interfaith experiences, even when grounded in specific communities or traditions.

“That’s part of what Kamala Harris represents, regardless of politics,” he says. “We are invited to a closer proximity with people who are, you know, very different than ourselves.”