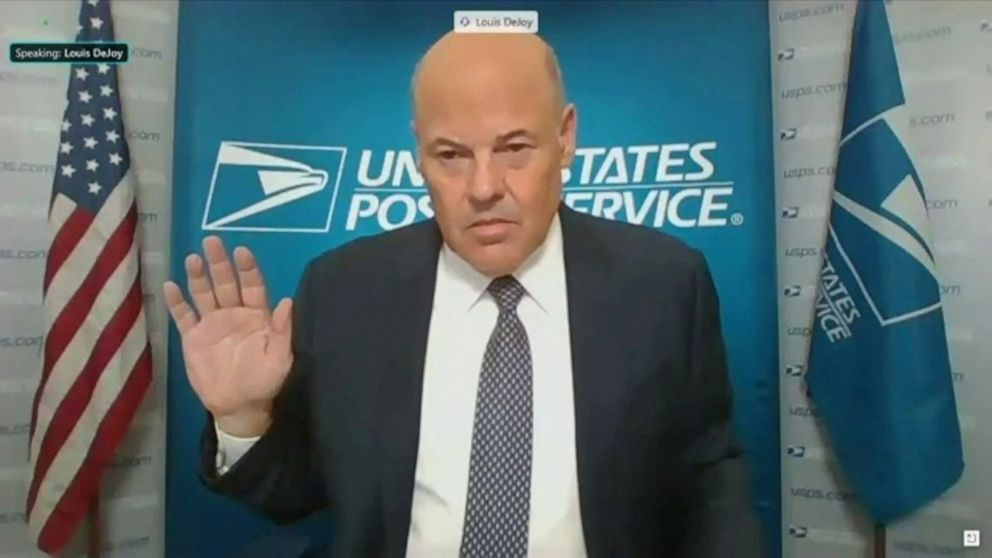 Instead, DeJoy, a former logistics executive and longtime Republican financier, framed the changes as necessary to reverse years of significant financial losses incurred by a continuing drop in mail volume.

While he refused to undo cost-saving measures that have already been implemented as Democrats have demanded, DeJoy vowed that the Postal Service is “fully capable” of “securely” handling millions of ballots and delivering them on time, as pandemic-wary voters look for a safer way to pick their next president.

The internal changes at the heart of DeJoy’s testimony coincided weeks earlier with a full-on attack on “mail-in voting” from President Donald Trump, sparking the allegations of improper political influence.

DeJoy’s testimony on Friday came on the eve of a House vote Saturday to provide billions of dollars in additional funding to the Postal Service and to block certain changes at the agency.

Here is how the virtual hearing unfolded:

Republican Sen. Ron Johnson wrapped up the hearing with another defense of DeJoy, who largely deflected Democrats’ questions, saying he has been the target of a “political hit job.”

DeJoy declares: “We have plenty of cash to operate for the election.”

But he said that is a “separate thing” from whether the Postal Service has “cash to operate the business in the future.”

He said that the Postal Service has already taken a $10 billion hit due to COVID-19, and to remain viable in the future “the biggest thing we need is legislative reform.” He said he would also like to “get long-term financing by new vehicles.”

DeJoy suggested that urban areas hit hard by COVID-19 might experience more delays than other areas. He said that in “more urban areas” the pandemic “scares our workers.”

While “our employee availability average has dropped across the country” by about 4 percent, “hotspots” like Philadelphia and Detroit are experiencing drops as high as 20 or 25 percent, according to DeJoy. “We have days where we’re short 200 carriers, and this can go on for a while.”

DeJoy just said that the Postal Service does not need “a massive federal bailout” to be able to handle all the mail tied to the election, but he did say that believes the agency needs to be reimbursed for costs incurred during the pandemic.

Asked if he feels he needs a massive federal bailout to be able to deliver the mail on Election Day, DeJoy responds: “No, I do not need a massive — I don’t need anything to deliver mail on election night. But we do need legislative reform. … And we do need to be reimbursed for our costs,” especially those costs stemming from the pandemic.

DeJoy also called it “a farce to sit here and believe” that the Postal Service can survive without making internal changes.

Dejoy commits to a goal of delivering 95 percent of election mail within one to three days, but he also indicated that the Postal Service has yet to put together a “complete plan” for making sure the system can handle the expected surge of voting by mail.

Sen. Maggie Hassan, a New Hampshire Democrat, asked DeJoy: “Do you have a detailed plan about how you’re going to ensure the kind of delivery that Americans count on for their voting by mail? Do you have a more detailed plan than what’s in your letter, yes or no?”

DeJoy: “There are detailed processes that we are going through, and there are going to be expanded plans to that … I don’t think that we will have the complete plan by Sunday night, we’re just putting [advisory] committees together.”

Nevertheless, DeJoy insisted: “The American people can feel comfortable that the Postal Service will deliver on this election.”

Asked by Sen. Tom Carper, a Delaware Democrat, whether he will be restoring the Postal Service collection and processing capacity impacted by removal of collection boxes and shutting down of machines, DeJoy said he would not be doing that, saying, “It’s insignificant, it’s not material to anything that we do. And we’re sticking to where we’re at right now.”

Meanwhile, asked if he has any advice for voters, DeJoy said: “Vote early, vote early.”

Earlier, he said: “We will deploy processes and procedures that advance any election mail, in some cases ahead of first-class mail.”

Under questioning from Ohio GOP Sen. Rob Portman, DeJoy insists that he will not replace any of the mail-sorting machines that have been decommissioned so far, saying, “There’s no intention to do that, they’re not needed.”

He denies that the Postal Service is eliminating overtime pay for employees, but he didn’t dispute that overtime is being limited.

He also said that the move to implement post office closures began before he arrived, but since concerns were raised he suspended the closures until after the election.

Nevertheless, DeJoy acknowledged that the changes he’s made have caused delays and that those delays should have been addressed in a matter of days, but it’s taken weeks. He said that he now expects 97 to 98 percent of mail to be delivered on time.

DeJoy also said the pandemic’s impact on the Postal Service is contributing to delays: “Our employees are experiencing the COVID-19 pandemic also, and we have a significant issue with employee availability in many, many parts of the country that are leading to delays in delivering the mail.”

As for alleged political influence, DeJoy said he has “never spoken to the president about the Postal Service, other than to congratulate me when I accepted the position.” He said he previously told Treasury Secretary Mnuchin that he was “working on a plan, but I never discussed the changes that I made.”

DeJoy just said those who allege he is “trying to have any negative impact on the election is an outrageous claim.”

“I voted by mail for a number of years. The Postal Service will deliver every ballot and process every ballot in time, that it receives.”

“I want to ensure this committee and the American public that the Postal Service is fully fully capable and committed to delivering the nation’s election mail securely and on time. This sacred duty is my number one priority between now and Election Day,” DeJoy says.

DeJoy delved into the specific concerns that have been raised in recent days and weeks.

On the removal of blue collection boxes at locations around the country, he described it as “a data-driven method” that’s routine and based on usage rates in communities. He said that there are about 140,000 boxes across the country, and over the past decade 35,000 have been removed. “This is a normal process that’s been around 50 years.” Since he became postmaster general, 700 boxes have been removed — which he only found out about when news outlets started covering it, according to him. “I had no idea that that was a process.”

On sorting machines being decommissioned, he said it’s because “mail volume is dropping, and sorting machines are running at about 35 percent utilization because while mail volume dropped “so rapidly” package volume has jumped. “We really are moving these machines out to make room to process packages,” he said.

But, he emphasized, “both the collection boxes and the machine close-down I was made aware of when everyone else was made aware.”

DeJoy continued to defend the changes he’s made within the agency, without so far offering details about what he’s actually done. He conceded that the changes have caused delays and that those delays should have been addressed in a matter of days, but it’s taken weeks. He said that he now expects 97 to 98 percent of mail to be delivered on time.

Embattled Postmaster General Louis DeJoy is defending his actions over the past 67 days at the top of the Postal Service.

“As we head into the election season, I want to assure this committee and the American public that the postal service is fully capable and committed to delivering the nation’s election mail securely and on time.” He also said there have been “no changes in any polices with regard to election mail for the 2020 election,” he insisted.

“We must adapt to the realities of our marketplace” and generate more revenues, he said.

In stark contrast to his Republican counterpart’s opening statement, the top Democrat on the Senate panel, Gary Peters, D-Mich., warned that — “just months away from an election where we expect record numbers of Americans to vote by mail” – the country is facing “a mail crisis.”

Peters accused DeJoy of failing to fulfill his obligations as postmaster general, telling DeJoy, “The operational changes you implemented, without consulting with your customers or the public, have caused significant delays – delays that have hurt people across the nation.”

“The country is anxious about whether the damage you have inflicted so far can be quickly reversed and what other plans you have in store that could further disrupt … timely delivery from the Postal Service,” Peters said.

DeJoy is sworn in from what appears to be Postal Service headquarters and begins his opening statement.

At the start of today’s hearing, the chairman of the Senate Homeland Security and Government Reform Committee, Ron Johnson, R-Wisconsin, accused DeJoy’s critics of engaging in a “character assassination,” saying Democrats “have put him in the crosshairs of another hyperbolic false narrative perpetrated to gain political advantage.”

Johnson dismissed any concerns about the recent changes implemented by DeJoy, insisting the new postmaster general deserves “credit” for “taking on the very thankless task of trying to maintain the United States Postal Service as a financially viable entity.”

Though he acknowledges that “the long-term financial reality of the postal system is bleak” due to a drop-off in mail volume, Johnson called “false” any suggestion that failing to provide more funding to the Postal Service “will undermine the election.”

According to Johnson, “The Postal Service has $15.1 billion in cash following a better than expected financial performance during the pandemic.”