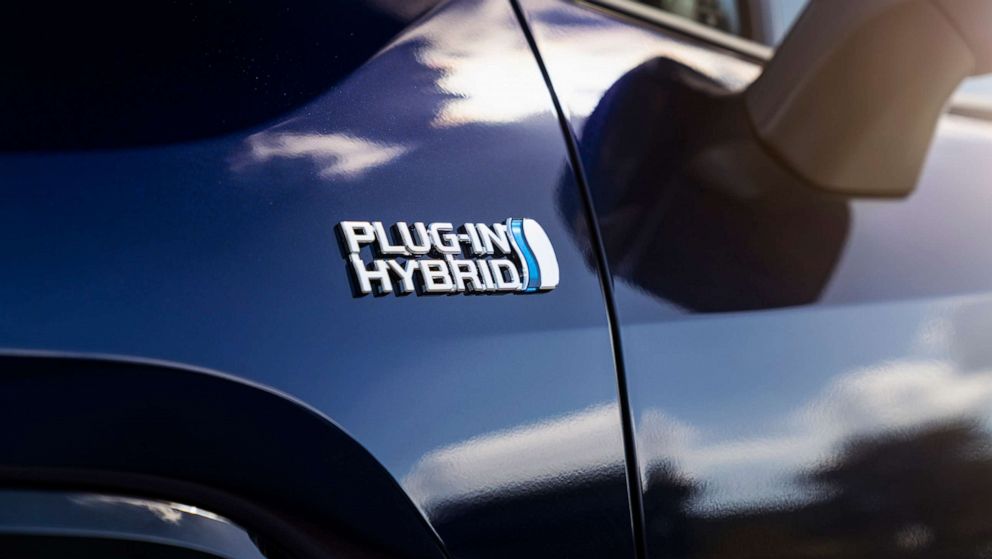 The all-new Toyota RAV4 Prime sport-utility vehicle can go from 0–60 mph in 5.7 seconds and produce 302 horsepower, making it the quickest four-door model in Toyota’s lineup.

What consumers may not realize about America’s top-selling SUV? That it’s a plug-in hybrid-electric vehicle, or PHEV in industry speak. PHEVs usually have larger batteries than non-plug-in hybrids and can travel longer distances in electric modes.

“PHEVs remain a tough thing to market here in the U.S. People don’t understand what a plug-in hybrid is,” Ed Kim, a veteran industry expert and vice president at AutoPacific, told ABC News.

“It’s incumbent on automakers to explain what the benefits are to consumers and overcome this insurmountable marketing challenge,” he said.

Traditional hybrids, which have gasoline engines and electric motors but no charging plug, are still largely synonymous with Toyota’s popular Prius hatchback, once the go-to green vehicle until Tesla won the hearts and pocketbooks of tech early adapters and wealthy environmentalists. Consumers have bought more than 3.6 million Toyota hybrids worldwide, according to the company. In 2019, the RAV4 Hybrid, the non-plug-in version, outsold the Prius by nearly double.

The RAV4 Prime can travel an estimated 42 miles on a full battery charge before the vehicle’s 2.5-liter four-cylinder gas engine kicks in, the highest EV range of any plug-in hybrid SUV currently on the market. Lee, however, conceded that Toyota has work to do to get consumers acquainted with plug-in hybrids.

“There’s still a lot of confusion in the marketplace about these alternative powertrains,” she said. “We are really focusing heavily on performance and style and not leading with the PHEV tech. There are so many things to attract the consumer to the vehicle in the first place.”

Sales of plug-in hybrids are growing globally, driven by fuel economy regulations in China and Europe, according to Mark Wakefield, managing director at AlixPartners. In the U.S., traditional hybrids are still preferred by motorists followed by pure electric vehicles, like Teslas, GM’s Bolt and the Nissan Leaf. PHEVs accounted for just 0.9% of the domestic automotive market in first half of 2020 versus 1.8% for pure EVs, Wakefield said.

The first mass-produced PHEV in the U.S., the Volt, went into production a decade ago. In March 2019, the last Volt rolled off the assembly line, averaging fewer than 20,000 sales per year though its electric-only range topped 53 miles.

Thirty PHEVs are expected to be introduced in 2020 with another 11 coming in 2021, Wakefield said, though the coronavirus pandemic has halted or delayed several launches. Going forward, the number of new PHEVs will dwindle as automakers aggressively push out EVs.

“PHEVs have a distinct role to play for the time being,” Wakefield said. “Battery electric vehicles are not cost competitive for most Americans right now.”

Pre-coronavirus, the average American’s commute to work was 26.6 minutes each way, a short enough distance that could be entirely handled by a PHEV’s electric battery, he noted. Plug-in hybrids use roughly 30% to 60% less petroleum than conventional vehicles, according to the U.S. Department of Energy, and the majority qualify for the $7,500 federal tax credit.

Yet the benefits of owning a PHEV may not be enough to outweigh the drawbacks, Wakefield argued. PHEVs cost an additional $4,000 to $8,000 more than a comparable non-plug-in hybrid and are heavier than a traditional hybrid because of the two powertrains. Moreover, not all Americans have access to a charging station — either at home or at the office — which defeats the purpose of owning a PHEV, he pointed out.

“And if you’re very focused on the environment, there is still a gas-polluting engine on board,” Wakefield said.

Education and a shift in thinking could get more Americans energized about PHEVs, according to Anthony Garbis, a product manager at Audi.

“PHEVs should be a non-conversation,” Garbis told ABC News. “They’re fast and efficient and priced competitively.”

The German automaker currently offers two PHEVs — the Q5 TFSI e and A8 TFSI e. A third, the A7 TFSI e, goes on sale this fall.

The Q5 TFSI SUV, which accounts for a tenth of Q5 sales, gets an estimated 20 miles in electric-only mode; that number slips to 17 miles for the A8 TFSI e. By 2025, 30% of Audi’s portfolio will be electrified.

“For some people a full electric car is overkill,” Garbis said. “PHEVs are a great step between full gas and full electric — no range anxiety, no compromises and good gas mileage.”

Audi’s German competitor, BMW, offers five plug-in hybrid models, with the additions of the X5 xDrive45e and 2021 530e sedan in July. The X5 xDrive45e gets an estimated 30-mile EPA electric-only range. By comparison, the 2020 745e xDrive sedan, which went on sale in April of 2019, can travel just 18 miles on the full battery charge. BMW’s PHEV sales are on the rise in the U.S., according to John Kelly, a BMW product manager, with 2020 shaping up to be a “big year” for the automaker in terms of hybrids.

“They look the same and drive similarly,” Kelly said. “Consumers need to get behind the wheel [of a PHEV], feel it, experience it, live with it.”

The first model from Polestar, Volvo’s performance brand, is a 2-door hybrid sports car called the Polestar 1 that boasts up to 77 miles on a single charge and 609 horsepower and 738 lb.-ft of torque.

Even Ferrari, the supernal Italian marque known for its distinctive, roaring engines, decided to build a plug-in hybrid supercar, the SF90 Stradale. Three electric motors and a V8 turbo engine help accelerate the SF90 Stradale from 0–62 mph in just 2.5 seconds. The electric range? A disappointing 15 miles.

Americans who seek a PHEV minivan have one option: the Chrysler Pacifica, which entered the market in 2017. Drivers get 32 miles of electric-only range before any fuel is used. Adding range at home takes two hours with a 240-volt Level 2 charger. Matt Davis, director of Chrysler and Fiat Brands for Fiat Chrysler Automobile, said the Pacifica Hybrid has brought a younger, more educated and more affluent customer to the company. Sales of the minivan tend to spike at the end of the year for the $7,500 federal tax credit, he said, but there are more pluses to owning a PHEV than a tax credit.

“One of the things we’re working on is educating people about the benefits of PHEV,” he told ABC News. “The hybrid experience is not abrasive. It’s very smooth and quieter and all that torque is available to you.”

Kim of AutoPacific said the lack of a nationwide charging infrastructure continues to be a significant road block for the mass adoption of electrified vehicles. The plethora of PHEV models coming to showrooms are a result of overseas policies and government edicts, he noted, and market demand in the U.S. for these more fuel efficient vehicles is “modest.”

“The U.S. is not the intended audience — at least from the German automakers perspective at least,” he said. “PHEVs are best thought as stepping stones to full electrification in the U.S. I don’t see a future where they become really popular.”

What America owes: How reparations would look and who would pay