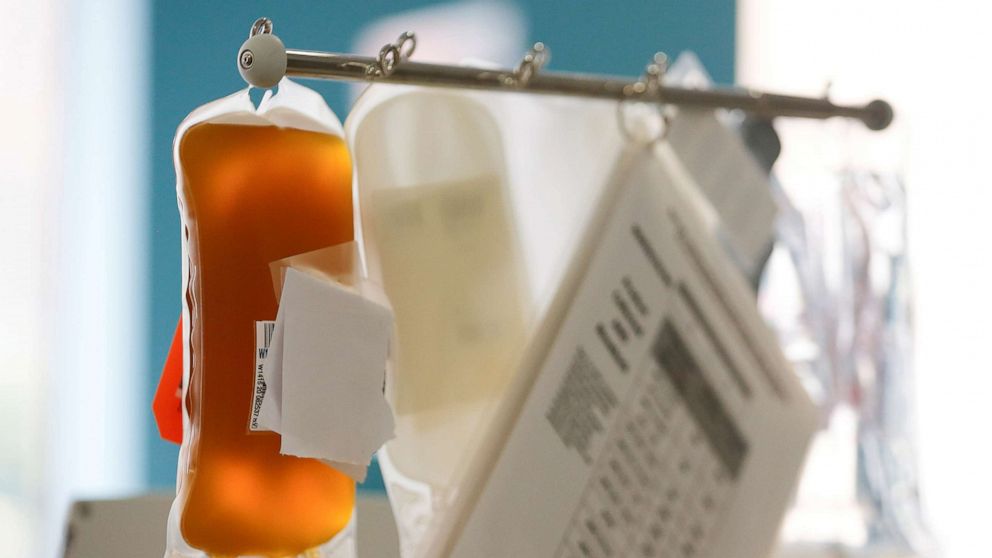 In continued combat against COVID-19, the call for more and better data has grown gradually louder: good information to help equip researchers with understanding of the virus — and options to fight it.

One of the treatments now considered among the more promising: convalescent plasma — shown as safe over decades of use, and widely touted for its promise. Yet it must face further clinical trial.

Now, Vanderbilt University Medical Center has received a $34 million grant to conduct a yearlong, nationwide study of convalescent plasma to treat COVID-19. The study will furnish what health officials have been urging: robust data built on randomized, controlled experiments which could help fill the knowledge gaps about the virus.

“This is high stakes, and a lot is hanging in the balance,” Dr. Todd Rice, one of the study’s leaders, told ABC News. “In order to truly understand whether plasma adequately helps — we need real studied data, to understand the benefits and even potential downsides. We need that control arm to help guide us.”

Convalescent plasma, the yellow liquid separated from the blood of recovered COVID-19 patients, is thought a viable way to help others fight off or recover from the disease. Antibodies found in that plasma – antibodies already proven their mettle at beating the virus – are then harvested, and deployed to treat the new sick.

The seed money for this Vanderbilt study — courtesy of country music superstar Dolly Parton, who donated $1 million for coronavirus research — was used for a proof-of-concept study on 40 patients.

Scientific method during the age of COVID, however, often presents a catch-22: Control groups require a placebo group. And amid a health crisis of global proportion and desperate demand for treatment, finding volunteers willing to risk the proverbial sugar pill can pose a high hurdle. Thus, many of the plasma studies already in progress observe treatment without incorporating control groups, making it difficult to ascertain true efficacy.

Top federal health officials have asked the Food and Drug Administration to pump the brakes on emergency authorization for plasma treatment, which was widely thought imminently poised to come through, and what the director for the National Institutes of Health Thursday called “promising results … now being further assessed.”

Vanderbilt’s Rice knows the context in which his trial now begins.

“I think it just makes the charge even that much more important — let’s get the data that will inform, push forward and do this. Or, find out, let’s not do plasma and then find something else that will help,” Rice said. “But we have to try.”

Other trials have gotten underway. NYU Langone Health started a trial with colleagues at Montefiore Medical Center. The Mayo Clinic is running the country’s largest plasma program, though it also does not have a control group.

Vanderbilt’s study will implement a randomized, double blind, controlled trial, referred to in science as the “gold standard.” The study aims to recruit 1,000 participants in 50 sites across the country, completing enrollment by the end of October and reporting results in November.

“The goal is to offer this to as many consecutive patients as possible,” Dr. Hollis O’Neal told ABC News. His team at LSU Health Sciences Center in Baton Rouge, Louisiana, has joined the Vanderbilt trial. “We’re doing this trial because number one, we don’t know that it works. We don’t know the answer — that’s what we’re trying to figure out. And I don’t think you can ever say any single trial is the definitive answer — but this could get us close. It’s an opportunity to answer the question, and it’s very appealing to us.”

“This is not going to be the last pandemic,” O’Neal continued. “And we need to learn a lot. We need science — science will help us survive.”

Nearly 30 sites so far have expressed interest in joining the study, according to Vanderbilt. Rice outlined a broad swath of invitations, targeting both current hot spots and areas of the country less scrutinized thus far, from Ohio to Florida, Minnesota to Washington — hoping to form a cohesive and comprehensive probe of plasma treatment.

Studies like theirs, whatever the outcome, will help create the next steps on COVID’s front line.

“The expectation with this money is that we’ll give them a definitive answer,” Rice said. “Actually my heart rate just increased a little saying that. So high pressure — but hopefully, we’ll be able to say, mission accomplished.”