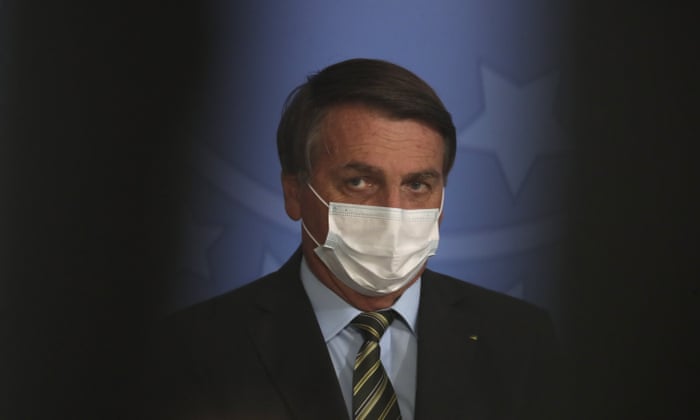 Brazil’s social media-savvy leader is facing perhaps the most severe online backlash of his presidency after unsuccessfully trying to snuff out questions about his family’s financial dealings by warning a journalist he wanted to “smash his face in”.

Jair Bolsonaro issued the threat on Sunday, after a reporter from one of Brazil’s leading newspapers asked him to explain why a former policeman with alleged links to Rio’s mafia had paid thousands of pounds into the bank account of his wife, Michelle Bolsonaro.

“President Jair Bolsonaro, why did your wife Michelle receive 89,000 reais from Fabrício Queiroz?” they tweeted in unison at Brazil’s far-right leader.

Fabio Malini, a social media researcher who is tracking the backlash, said hundreds of thousands of internet users quickly joined the counter-attack against Bolsonaro.

By late on Sunday he had identified more than 1.1m tweets on the topic, with a similar deluge on Facebook and Instagram. At the peak of the revolt about 3,000 comments were being tweeted each minute.

“I was genuinely startled by the scale of this,” said Malini, from the Federal University of Espírito Santo.

“Without doubt it was the moment where we saw the largest number of people directing attacking him [since he took power]. Quite often people attack his ideas. What happened yesterday is that he was directly challenged on his social media accounts … and this must cause him concern … It was a very unusual situation.”

The uprising appeared to stun Bolsonaro’s army of online cheerleaders and leave the administrators of his social networks – where he has more than 40 million followers – scrambling to delete critical comments and block the accounts of critics.

Malini said one of the most striking things about Sunday’s rebellion was the momentary formation of a united anti-Bolsonaro front – something that has so far proved elusive to the right-wing populist’s divided, ideologically-diverse opponents.

Those demanding answers about the mystery payments to Bolsonaro’s wife came from both right and left: prominent political adversaries, celebrities and singers but also anonymous social media users who rarely waded into such battles.

Bolsonaro sought to regain control of the narrative on Monday, falsely claiming that “plonker” journalists ran a greater risk of dying because of a coronavirus epidemic he stands accused of catastrophically mishandling. But those efforts appeared to fall flat, with social media users continuing to quiz Bolsonaro over the payments to his wife.

“People are continuing to produce and share the question. It’s become a kind of incessant spectre because he has no answer to offer,” said Malini.

With Brazil’s Covid-19 death toll of more than 114,000 now the second highest in the world, the researcher said he believed the insurrection was about far more than the Bolsonaro family’s finances.

“There was something cathartic about what happened. Lots of people wanted to express their anger and resentment towards this government and used this as a kind of trigger to voice their disappointment, disillusionment and their lack of hope.”

Reports that Queiroz had paid money into an account held by Michelle Bolsonaro first emerged in late 2018 after anti-corruption investigators probing him identified a 24,000 reais (£3,285) payment.

Bolsonaro, then president-elect, claimed that deposit was repayment for a 40,000 reais loan he had extended to Queiroz. But neither Bolsonaro nor the first lady have commented on the recent allegations that she received 89,000 reais from Queiroz and his wife.