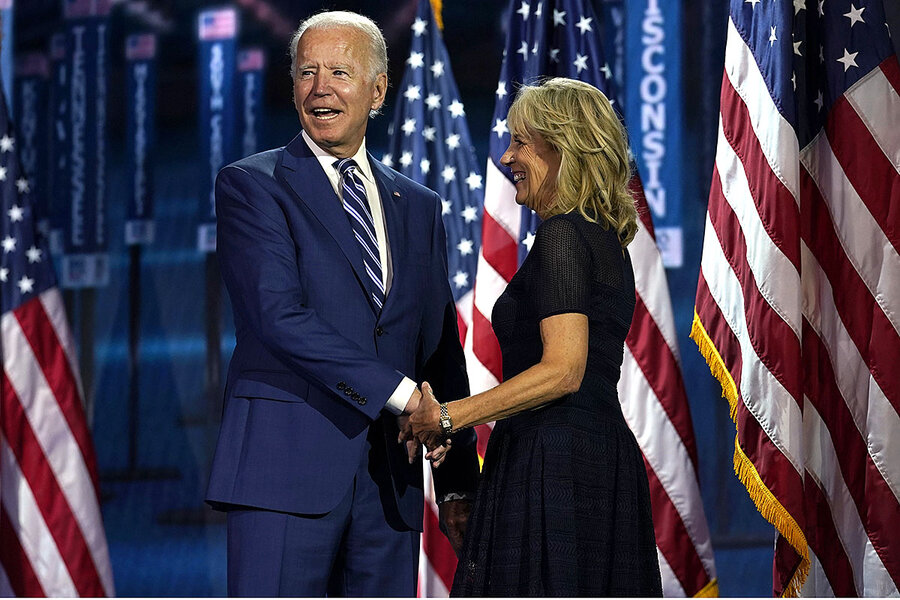 Joe Biden is, in crucial ways, the most improbable major-party presidential nominee in modern American history.

He’d be the oldest first-term president by more than seven years. His prior presidential campaigns, in the 1988 and 2008 cycles, ended early amid serious stumbles. And he has a very long public record – 36 years as a United States senator and eight as vice president – providing his opponent with almost endless fodder for attacks.

He’s also a white man in a rapidly diversifying nation that, especially now, is acutely aware of the privileges that attach to being white and male, perhaps more than at any time since the 1960s.

Yet as former Vice President Biden takes the virtual convention stage Thursday night to accept his party’s presidential nomination, he may end up being just what the Democrats need, political analysts and allies say.

In many ways, Mr. Biden is the antithesis of President Donald Trump. He exudes empathy, amid his own struggles with stuttering and multiple family tragedies. He was also, while in the Senate, proudly at or near the bottom in terms of personal wealth. He didn’t attend elite schools.

But arguably just as important, he’s also not Hillary Clinton, the 2016 Democratic nominee who fumbled away the presidency in part by losing the white working-class vote – big.

“Hillary Clinton in particular, for better or worse, right or wrong, did not connect with people in the way Joe Biden has,” says David Redlawsk, political science chair at the University of Delaware, Newark.

Four years ago, Mrs. Clinton lost white, non-college-graduate voters to Mr. Trump by a whopping 37 percentage points – 66% to 29%, according to the exit polls. That demographic was especially important in Pennsylvania, Michigan, and Wisconsin, the three “blue wall” states that Mr. Trump won to pollsters’ surprise, handing him the presidency.

Today, Mr. Biden is still losing white non-college voters to Mr. Trump, but by a much smaller margin – 40% to 55%, according to the latest Marist poll. Two and a half months before the Nov. 3 election, he leads Mr. Trump overall by about 8 percentage points.

Bobby Juliano, a veteran consultant with strong ties to organized labor, knows both Mr. Biden and Mrs. Clinton well. The key difference, he says, is that Mr. Biden is himself in public, whereas Mrs. Clinton was more guarded.

“When you’d have lunch or see her, she was much warmer – great sense of humor, huge laugh – than the more public persona,” Mr. Juliano says. “For whatever reason, there was a reluctance to show that side. Huge mistake.”

Many analysts saw an element of sexism in some voters’ resistance to Mrs. Clinton. But her presidential bid likely also suffered as a result of her decades at the highest levels within the Beltway elite, and eventual wealth. She boasted gold-plated Washington credentials right as a long-building populist backlash was cresting – stoked by an outsider with no political experience and a larger-than-life persona.

The technocratic, and at times cautious, Obama presidency usually subsumed Mr. Biden’s more gut-level approach to politics and governing, which in a narrow sense makes the former veep a bit more like Mr. Trump than President Barack Obama. Mr. Biden’s history of gaffes can also be seen in that light. As vice president, he usually deferred to President Obama on policy. A notable exception came when Mr. Biden declared his support for same-sex marriage – now an unremarkable view in both parties – before Mr. Obama did.

Ironically, Mr. Biden has actually been a Washington creature much longer than the Clintons. And he seems to have developed some of the blind spots that can come from operating at the top levels of government – including looking the other way when adult children use their government connections for private gain, just as Mr. Trump has done with his own children.

Mr. Biden’s son Hunter – specifically, his business dealings in Ukraine and China while his father was vice president – looms as a major Trump campaign talking point. Team Trump launched a seven-figure digital ad Thursday aimed at portraying the younger Mr. Biden as corrupt. Biden spokeswoman Symone Sanders told Politico the ad, which focused on Hunter Biden’s trip to China in 2013, was “a conspiracy theory.” Mr. Biden routinely says he has never talked to his son about his business dealings.

The timing of the new ad campaign could have been better for Mr. Trump. Former senior adviser Steve Bannon was indicted Thursday for defrauding donors to an online crowdfunding campaign for a U.S.-Mexico border wall. Mr. Bannon joins a long line of Trump associates who have landed in legal trouble and even prison.

Still, it’s Mr. Biden’s identity as the “anti-Hillary” that could be most salient come November, especially among swing voters in battleground states. Four years ago, Mrs. Clinton entered the race having already been effectively demonized for decades in conservative media outlets. Mr. Biden, by contrast, has been a much harder figure for his critics to define. His public persona is more along the lines of “Uncle Joe,” who sometimes says the wrong thing – not unlike the older white man currently occupying the White House.

Notably, Mr. Trump’s most frequent nickname for Mr. Biden is “Sleepy Joe” – a far cry from “Crooked Hillary,” and a sign that he sees Mr. Biden’s advanced age as a greater liability than a hard-to-follow story about Ukraine or China.

Unlike Mrs. Clinton, Mr. Biden has held tight to his original home bases – Scranton, Pennsylvania, and the state his family later moved to, Delaware – as central to his story.

That identity, rooted outside the power corridors of Washington, involved famously taking Amtrak back to Delaware every night to be with his family during his decades in the Senate. Mr. Biden’s image as a family man took hold early, after his first wife and baby daughter were killed in a car crash right after his first Senate election. The 2015 death of his older son, Beau, once seen as a promising national political figure in his own right, added to the Biden story of persevering through personal tragedy.

Through it all, Mr. Biden has maintained his home-state connection. From the state’s highest ranking leaders to small-business owners, Delawareans have their Biden stories.

Former Democratic Gov. Jack Markell tells of meeting the then-senator in 1998, and how he offered to spend a day on the campaign trail with Mr. Markell as he made his first run for office.

“It was an absolute master class in retail campaigning,” Governor Markell says.

The lesson, he says, was not just to walk up to people and ask for their vote. That was “presumptuous,” the former governor says Mr. Biden told him. “You have to ask them to learn more about you, so when they go to vote, they have a sense of who you are. He was right.”

Candace Roseo remembers how Mr. Biden treated her and her family when her sister, a state police officer, was killed in the line of duty three days after she started on the job. She recalls Mr. Biden saying he felt somehow responsible for her death, as the funding for her position had come through a crime bill he had pushed in 1994.

“I won’t ever forget the empathy and genuine compassion that Joe showed,” says Ms. Roseo, the owner of a pizza restaurant in Wilmington, Delaware. “He sat there holding my mother’s hand.”

Political demographers are still sorting through the reasons for the shift in polls away from Mr. Trump by some white working-class voters. But they are focused on the multiple national crises at play.

“Supporters of Mr. Trump in this group in 2016 may be roughly divided into those who were primarily concerned with sending an aggressive cultural signal through their vote, and those who primarily believed Trump would actually make their lives better and bring back their communities,” writes Ruy Teixeira of the Democratic-aligned Center for American Progress in an email.

“His failure to do so, made much worse by the current pandemic and recession, has caused significant defections among the latter group,” he says. In addition, Mr. Biden is also likely to benefit from the support of voters who backed third-party candidates in 2016, thinking a Clinton victory was a foregone conclusion, but who now feel compelled to vote against the president.

Another key group among whom Mr. Trump is losing traction is seniors. They are a relatively conservative population group, but “they’re not as conservative as their reputation suggests,” Mr. Teixeira says.

They support raising taxes on those earning more than $600,000 a year by 44 points, paid family leave by 29 points, and a $15-an-hour minimum wage by 21 points, he says, citing data from the UCLA Nationscape survey.

“Ultimately, this campaign is about values and decency,” says Moe Vela, who was a senior adviser to then-Vice President Biden on Latino and LGBTQ matters.

Among the large, diverse Democratic field that ran this primary cycle, Mr. Vela says, Mr. Biden offered more than all the others a sense of security with the electorate.

“People are familiar with him,” Mr. Vela says. “Does he make you want to jump up and down with pompoms and a sign? No. But you won’t wake up worried.”