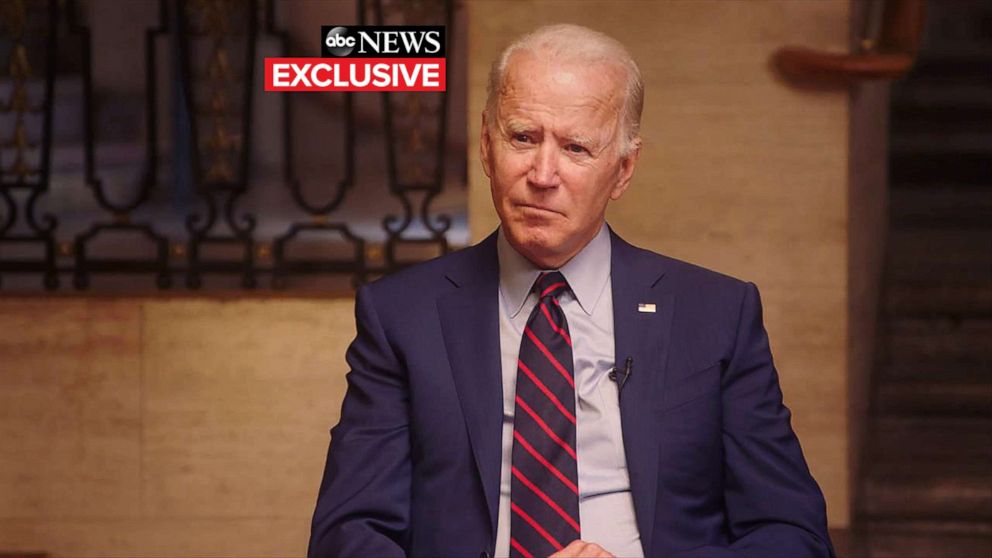 President Donald Trump will secure renomination Monday and immediately seek to make the general-election race personal — with a Trump-heavy though mostly virtual Republican National Convention aimed at defining contrasts with his opponent.

But former Vice President Joe Biden and Sen. Kamala Harris aren’t making it easy for Trump to turn them into caricatures. A cautious Biden path through the primaries led the new team to a relatively centrist convention message to set up the final 10 weeks of the campaign.

In their first interviews as a ticket, with ABC’s David Muir and Robin Roberts, Biden and Harris rejected tax increases for small businesses and anyone making less than $400,000. They also distanced themselves from Medicare for All and sought to reframe the argument about defunding police to assert that Trump is the one proposing cuts to programs that support local law enforcement.

Biden is building on his convention commitment to serve “all Americans.”

“The job of a president is to represent everyone, whether they voted for you or not,” he told Roberts.

“The president’s job is to heal,” Biden said toward the end of his interview with Muir. “I’m ready to reach out.”

Trump is viewing his convention as a chance to recast the campaign. But his scripts still call for an opponent Biden won’t necessarily be — in the context of a race that remains far more about Trump than about his opponent.

Ahead of the national convention this week, Republican delegates gathered in Charlotte, North Carolina, and approved a number of resolutions that were rather eye-popping as the country continues to battle the coronavirus and debate racial inequity.

One resolution specifically refutes the “legitimacy of the Southern Poverty Law Center to identify hate groups.”

The resolution comes after the Southern Poverty Law Center has clashed with President Trump, his family and his administration over both policy and rhetoric. The longstanding and widely trusted civil rights organization has for years laid out data to argue that the president’s embrace of some far-right groups deemed to be white supremacist organizations “emboldens white nationals.”

Another resolution from the GOP members states that, as COVID-19 cases continue to rise, “free assembly has been traded for ‘masked social distancing,’ yet opportunistic violent protesters and casino goers are still allowed the right to assemble.” The resolution appears to mock “masked social distancing,” which medical professions and local leaders from both parties have pushed. Even the delegates in Charlotte themselves have been required to wear masks inside the convention center for their meeting this week.

The rather extreme policy platforms predicate a convention program that is very thin on more moderate GOP speakers.

No former presidents — instead what we know right now is that the Republican convention will lean heavily on the president’s immediate family, a few elected officials, and some average Americans’ personal testimonials … though some are expected to be rather controversial.

With some exceptions, Republicans run the risk of their programming lacking much racial and ethnic diversity as well as heavy-hitters to endorse the president’s message.

The TIP with Kendall Karson and Will Steakin

With the Democratic ticket officially nominated, the spotlight now moves to Trump and his RNC, with a different scene expected for his renomination in 2020 than he had for his nomination in 2016.

After the convention in Cleveland four years ago saw never-Trumpers bring chaos to the convention floor, this time around, Trump has the full backing of his party. All but one delegate will be awarded to him, according to an ABC News analysis, allowing him to cruise to become the party’s standard-bearer for the next four years at Monday morning’s roll call. And in a resolution approved over the weekend affirming that the 2016 platform will remain in place through 2024 — a decision made back in June — delegates also pledged to “continue to enthusiastically support the President’s America-first agenda,” further underscoring how much things have changed in four years.

The first day of the Republican convention is filled with procedural business, including formally nominating Trump at the only in-person portion of the entire four-day event. Small crowds might be present at the live speeches expected throughout the week, but some 330 delegates are ready to tick through party business in Charlotte, North Carolina, the original site of the entire convention, which has now been split between the Queen City and Washington, D.C. For the gathering of delegates in Charlotte, each state, territory, and the District of Columbia sent only a six-person delegation.

Trump is expected to make a “surprise” appearance at the Charlotte Convention Center, just as his party delivers him the reins once again, alongside Vice President Mike Pence, sources tell ABC News. But bringing delegates into an indoor meeting inside the convention center will not be without safety protocols — masks, temperature checks, at-home COVID-19 testing and contact tracing will all be part of the gathering.

In the first joint interview with Democratic presidential nominee Joe Biden and his running mate Sen. Kamala Harris, the former vice president told ABC “World News Tonight” anchor David Muir that everybody should pay “their fair share.” “I will raise taxes for anybody making over $400,000,” Biden told Muir, adding, “no new taxes” would be raised for anyone making under $400,000.

The worst presidential debate of all time