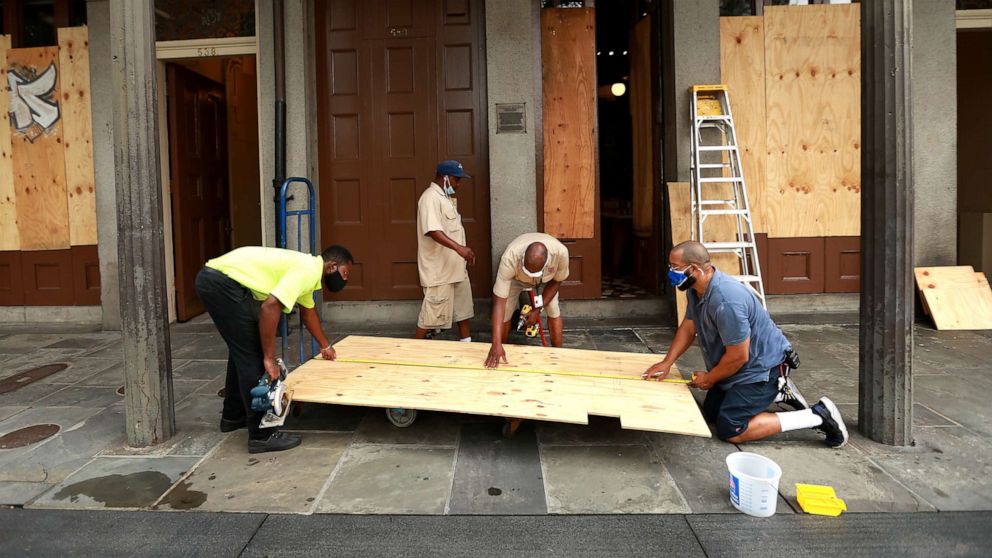 Emergency declarations and mandatory evacuation orders have been issued as two major storms are expected to bring heavy rainfall and storm surge to the Gulf Coast this week.

Hurricane Marco is forecast to make landfall on the northern Gulf Coast Monday afternoon or evening — either as a Category 1 hurricane or as a strong tropical storm — where it will slowly move west along the coastline toward Texas.

Tropical Storm Laura is expected to gather strength as it moves into the Gulf of Mexico in the next 24 to 36 hours. The National Hurricane Center has forecast it to be at least a Category 2 hurricane as it closes in somewhere between Southeast Texas and south-central Louisiana later on Wednesday and moves northeast.

“We’re expected to get a left hook from Marco and a right hook from Laura,” Louisiana Gov. John Bel Edwards said at a press briefing Sunday evening.

Authorities are warning about the narrow window between the storms. Within 12 to 18 hours of Marco leaving Louisiana, Laura is expected to move in, National Weather Service meteorologist Benjamin Schott said at a press briefing Sunday evening.

“I can’t even really put words real clearly about how remarkably odd that is, to have two systems like that so close to each other, impacting the same state within such a short period of time,” Schott said.

The shortest time between two named storms making landfall in Louisiana was five days back in 1885.

On Sunday, Edwards warned that repairing power outages between storms is unlikely and helicopters and vehicles might not be able to get out.

“The first 72 hours is on you,” Edwards said, elaborating later that residents should expect to shelter in place for at least that long.

The primary threat from these storms is water, due to storm surge, flooding from rivers and rain, Edwards said. Storm surge from Marco is predicted to be up to 5 feet, while storm surge from Laura could be least 10 feet along the southwest Louisiana coastline, Schott said Sunday evening.

“What we know is there’s going to be storm surge from Marco,” Edwards said. “We know that that water is not going to recede hardly at all before Laura hits, and so we’ve not seen this before, and that’s why people need to be paying particular attention.”

FEMA is stockpiling water and other supplies, the governor said, and the National Guard is providing drivers for buses in case of evacuations. Plus, 500 inmates have been evacuated so far, he said.

Edwards urged people to stay in their home as much as possible, and said that group shelters will be a “last resort” due to the coronavirus pandemic.

“Everything we’re doing is in a COVID pandemic environment, which complicates things greatly,” he said.

COVID-19 testing will be paused at community-based sites on Monday and Tuesday, and there will likely be additional closures, officials said.

Several universities have already announced closures for the beginning of the week, including Southern University and Louisiana State University, both in Baton Rouge.

Marco is expected to hit Texas on Tuesday, Schott said. On Sunday, Texas Gov. Greg Abbott declared a state of disaster in 23 counties, primarily along the coast. More could be added as the two storms progress, he said.

The Texas Military Department, including the National Guard, is preparing by assembling 860 helicopters and high-profile vehicles in the event of flooding evacuations. The state is also assembling “disinfection teams” and mobile COVID-19 testing squads. The Texas Division of Emergency Management is planning to shelter 5,000 evacuees.

Ahead of the storms, socially-distanced lines formed at grocery stores and gas stations.

“If Katrina taught us anything, it was to prepare for the unexpected,” Joseph Zuppardo, owner of Zuppardo’s Family Market in Metairie, Lousiana, told ABC New Orleans affiliate WGNO. “I think people are starting to learn from that. People are coming here a little earlier than they usually shop.”

People were stocking up on water, batteries, canned goods and beer and wine, Zuppardo told the station.

“I have my list of essentials so I’m just checking it off and keeping it pushing,” shopper Tyra Daniels told WGNO. “With COVID-19 and these two storms, it’s just getting to be a bit too much right now.”