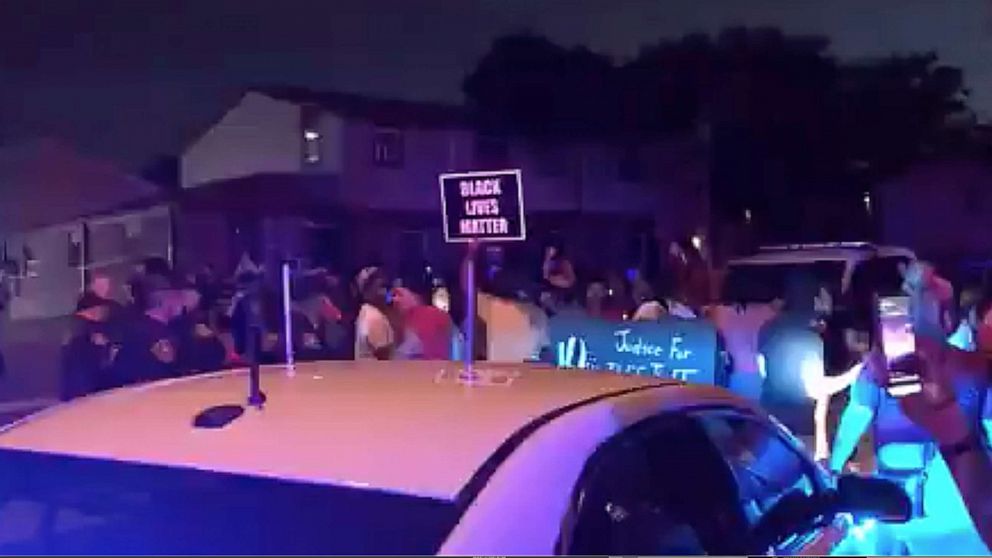 Authorities issued a curfew in Kenosha, Wisconsin, as angry crowds gathered in protest after a Black man was shot and seriously wounded by police Sunday evening.

Wisconsin Gov. Tony Evers has also authorized the National Guard to support local law enforcement and “help protect critical infrastructure and assist in maintaining public safety and the ability of individuals to peacefully protest,” according to a statement.

“I know folks across our state will be making their voices heard in Kenosha and in communities across Wisconsin. Every person should be able to express their anger and frustration by exercising their First Amendment rights and report on these calls to action without any fear of being unsafe,” Evers said. “This is a limited mobilization of the National Guard focused on supporting the needs of local first responders to protect critical infrastructure, such as utilities and fire stations, and to ensure Kenoshians are able to assemble safely.”

The shooting occurred just after 5 p.m. Sunday local time when officers from the Kenosha Police Department responded to a reported domestic incident on 40th Street near the intersection of 28th Avenue. The officers provided “immediate” medical aid to the person who was shot, authorities said. They were then flown about 45 miles to Froedtert Hospital in Wauwatosa, just west of Milwaukee. The person was listed in serious condition when they arrived at the hospital, according to a press release from the Kenosha Police Department.

Police did not identify the wounded individual nor elaborate on what led to the shooting.

Cellphone video allegedly taken by a bystander has been circulating on social media since the incident and has been viewed thousands of times. The video appears to show three officers with their weapons drawn following a Black man as he walks from the back of a vehicle to the driver’s side. As the man enters the driver’s side of the car, one officer, who is hanging onto the man’s shirt, opens fire. Shouting and several gunshots can be heard in the video.

The Wisconsin Department of Justice’s Division of Criminal Investigation (DCI), which is investigating the shooting, said all of the officers involved in the incident have been placed on administrative leave.

“All involved law enforcement are fully cooperating with DCI during this investigation,” the agency said in a press release. “DCI is continuing to review evidence and determine the facts of this incident and will turn over investigative reports to a prosecutor following a complete and thorough investigation.”

Gov. Evers has identified the wounded individual as Jacob Blake.

“Tonight, Jacob Blake was shot in the back multiple times, in broad daylight, in Kenosha, Wisconsin,” Evers wrote in a Facebook post late Sunday. “While we do not have all of the details yet, what we know for certain is that he is not the first Black man or person to have been shot or injured or mercilessly killed at the hands of individuals in law enforcement in our state or our country.”

Milwaukee ABC affiliate WISN spoke to Blake’s fiancé, Laquisha Booker, who said two of their kids were sitting in the back of the car when he was shot by police. She claimed the officers threatened to shoot her as well.

Booker told WISN she never called police and wasn’t sure why they were there. She said her fiancé wasn’t armed and didn’t own any guns or weapons.

“It doesn’t make sense to treat someone like that,” Booker told WISN.

A large crowd of protesters amassed at the scene after the shooting, prompting local authorities to impose the citywide curfew. Officers were seen using tear gas on protesters who had gathered outside the Kenosha Police Department.

Police said they have received “numerous” calls overnight about armed robberies and shots fired in the city.

Authorities later announced the Kenosha County Courthouse and administration building will be closed Monday due to “damage sustained during last night’s civil unrest.” Kenosha city officials held a presser Monday evening to update residents on the investigation, but the location of the presser had to be changed multiple times as protesters shouted in the background. The presser was originally scheduled to be outside, but it was moved inside. Banging and shouting from protesters could still be heard, so it was then moved a third time into an interior room.

Renowned civil rights attorney Ben Crump said he has been retained by Blake’s family and that the man is in stable condition. Crump claimed that Blake was helping to deescalate a domestic incident when police drew their weapons and Tasered him. As Blake was walking away to check on his kids, the officers fired their weapons several times into his back at point blank range, according to Crump.

“We all watched the horrific video of Jacob Blake being shot in the back several times by Kenosha police. Even worse, his three sons witnessed their father collapse after being riddled with bullets,” Crump said in a statement Monday. “Their irresponsible, reckless, and inhumane actions nearly cost the life of a man who was simply trying to do the right thing by intervening in a domestic incident. It’s a miracle he’s still alive.”

“We will seek justice for Jacob Blake and for his family as we demand answers from the Kenosha Police Department,” he added. “How many more of these tragic ‘while Black’ tragedies will it take until the racial profiling and undervaluing of Black lives by the police finally stops?”

He also called for a special legislative session to take up a package first introduced earlier this year that establishes statewide use of force standards for police.

“This package invests in community interruption violence programs and works to address the issue of inappropriate use of force by individuals in law enforcement, prohibit dangerous police practices build upon the work of law enforcement standards board and strengthens accountability measures,” he said. “These are commonsense policies that transcend political debate.”

He said the shooting underscores that racism is a public health crisis that demands immediate action.

“Let me be clear, this was not an accident, this wasn’t bad police work. This felt like some sort of vendetta being taken out on a member of our community,” Barnes said. “The irony isn’t lost on me that as Jacob Blake was actually trying to deescalate a situation in his community, but the responding officer didn’t feel the need to do the same. And now we all know Jacob Blake’s name.”

He said legislative leaders had ignored calls for change from people in every part of the state and now “another Black man is fighting for his life due to the actions of law enforcement.”

“The people of our state are done waiting for the Legislature to act, and so are we,” Barnes said. “We know we cannot remedy the systemic racism built into all of our systems with just this package of bills, but that does not mean we should stand still.”

The Wisconsin Professional Police Association said it supported the governor’s call for a special session of the legislature.

“As Wisconsin’s largest law enforcement group, we have a long history of undertaking and supporting efforts to strengthen the relationship between law enforcement and the communities it serves. For that reason, we wholeheartedly support Gov. Evers’ decision to call a special session of the legislature to begin addressing these issues. We also support the formation of a task force by Assembly Speaker Robin Vos to focus on these issues from a broader, more systemic perspective,” the association said in a statement. “We share the urgency expressed by the governor and we respect the long-term view advanced by the speaker. We urge these leaders to support one another and their distinctive strategies to affect meaningful change.”

ABC News’ Matt Foster, Sabina Ghebremedhin and Will Gretsky contributed to this report.