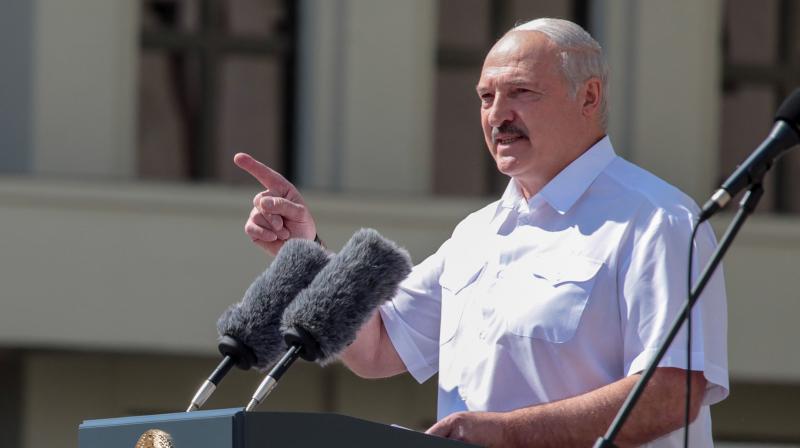 Minsk: Tens of thousands of Belarusian opposition supporters gathered for the largest protest rally in recent history in Minsk as President Alexander Lukashenko rejected calls to step down in a defiant speech.

Crowds of protesters marched through the streets to the central Independence Square on Sunday, with an AFP journalist estimating the turnout at more than 100,0000, a scale of protest not seen since the breakup of the Soviet Union.

Belarusian independent news site Tut.by called the rally "the largest in the history of independent Belarus".

Columns of demonstrators raised victory signs and held flowers and balloons as a sea of protesters gathered in Independence Square, the focus of peaceful demonstrations in recent days.

"Blood was spilled and the people will never forget that."

Darya Kukhta, 39, a mother of six, told AFP: "We believe that a new Belarus is beginning. I'm very happy to be seeing this with my own eyes."

Demonstrators held placards with slogans such as "You can't wash off the blood" and "Lukashenko must answer for the torture and dead".

Popular opposition candidate Svetlana Tikhanovskaya had called for a weekend of protests after leaving for neighbouring Lithuania following the disputed election, which gave Lukashenko 80 percent of the vote.

More and more Belarusians have taken to the streets over the last week to condemn Lukashenko's disputed victory and a subsequent violent crackdown by riot police and abuse of detainees.

Outside Belarus, hundreds of Czechs and Belarusians, some holding the traditional red and white Belarusian flag and portraits of Tikhanovskaya, gathered in Prague's historic centre Sunday in support of the protests.

There were also smaller shows of support in Romania and Poland, AFP journalists said.

Lukashenko, who has ruled Belarus for 26 years, is facing an unprecedented challenge to his leadership.

The 65-year-old strongman held a rare campaign-style rally on Independence Square before the opposition protest.

He told flag-waving supporters: "I called you here not to defend me… but for the first time in a quarter-century, to defend your country and its independence."

State television said 65,000 people attended the rally, though an AFP reporter put the number closer to 10,000.

"The elections were valid," Lukashenko said in a sometimes emotional speech.

"We won't give away the country!" he vowed.

With pressure growing from the street and abroad after EU leaders agreed to draw up a list of targets for a new round of sanctions, Lukashenko has reached out to Russia, Belarus's closest ally.

Moscow said Sunday it was ready to provide military help if needed.

The Kremlin said that in a call with Lukashenko, President Vladimir Putin had expressed Russia's "readiness to provide the needed assistance" including "if necessary" through the CSTO military alliance between six ex-Soviet states.

RT Kremlin-funded television reported that this was in the case of "outside military threats".

Tens of thousands have taken to the streets over the last week to denounce the election result and support Tikhanovskaya, a 37-year-old political novice who ran after other potential candidates including her husband were jailed.

From exile in Lithuania, where she fled on Tuesday, Tikhanovskaya had called for a weekend of peaceful rallies.

Thousands of opposition supporters demonstrated in Minsk on Saturday at the spot where a 34-year-old protester died during unrest on Monday.

Officials said the man, Alexander Taraisky, died when an explosive device he was holding blew up in his hand.

Following the release of video footage contradicting this, Interior Minister Yury Karayev told Tut.by on Sunday: "Maybe they shot him with non-lethal weapons", saying only rubber bullets were used.

The opposition has called for a general strike from Monday after hundreds of workers at state-run factories downed tools on Friday in a first sign that Lukashenko's traditional support base was turning against him.

Tikhanovskaya has announced the creation of a Coordination Council to ensure a transfer of power, asking foreign governments to "help us in organising a dialogue with Belarusian authorities".

She demanded the authorities release all detainees, remove security forces from the streets and open criminal cases against those who ordered the crackdown.

She has said she will organise new elections if Lukashenko steps down.