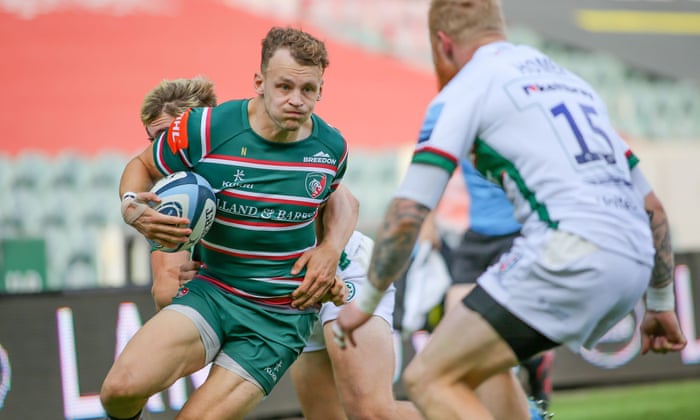 Leicester held on in the battle to avoid being tagged the club that would have been relegated but for Saracens’ disgrace, but even in victory their new head coach, Steve Borthwick, witnessed how far the most successful English club in the professional era have fallen.

The Tigers spent the final minutes hanging on having been 13-0 up with 20 minutes to go. They had three tries disallowed, two for infringements in the buildup, and despite showing the greater initiative, they were bedevilled by a lack of confidence. They remain one place off the bottom of the table, three points behind Worcester and five behind Irish.

Leicester paraded the Fiji wing Nemani Nadolo for the first time. The 32-year-old recruit from Montpellier and former Crusader was marked by Tom Parton, who conceded about eight stone in weight and six inches in height. The first time Parton touched the ball, he dared not try to go through Nadolo but found it took a considerable time to go around an opponent who seemed to cast as long a shadow as the Breedon stand and got nowhere.

Nadolo flattened Parton the first time he received the ball, but he was armed with far more than brute force and played a key role in the opening try on 21 minutes. Tom Youngs had just had a score ruled out when a review concluded he had not grounded the ball after George Martin had hijacked a London Irish throw-in five metres out.

Leicester’s early dominance was fed by a supply of penalties from the breakdown, where Tommy Reffell was supreme, and the tight. They looked to have messed up the scrum awarded after Youngs was denied by Ben Donnell, but Nadolo came into midfield to tidy up and created an overlap with a pass out of the back of his left hand that gave David Williams the space to score in the corner.

It put the Tigers 10-0 ahead after George Ford’s early penalty but Leicester, not for the first time, lost their way and spent much of the rest of the opening half in their 22. Leicester’s passing had been smooth and sharp but Irish were laboured in their movement, often operating from deep and quickly closed down.

It was very much a meeting of two teams at the wrong end of the table, a mess of knock-ons, scrums and resets. Leicester were hampered by the loss of two second-rows in the opening half, Harry Wells failing a head injury assessment and his replacement, Martin, lasting 17 minutes before limping off, but a game that would have dripped with tension had relegation been an issue was largely ritual.

Leicester extended their 10-point interval lead with Ford’s second penalty after Henry Elrington collapsed another scrum. Nadolo had a try ruled out because Ellis Genge’s pass to the wing as he made an inside run was deflected forward by Luke Wallace.

Leicester later had a third try ruled out, Reffell denied by Nephi Leatigaga’s obstruction on Ben Meehan. Irish were by then back in the game, taking advantage of Calum Green’s absence in the sin-bin for not rolling away on his line to win a series of scrums that concluded with Meehan forcing his way over.

Irish finished as they started, wasting positions by leaving tackled players isolated on an evening that highlighted a consequence of ring‑fencing the top flight.