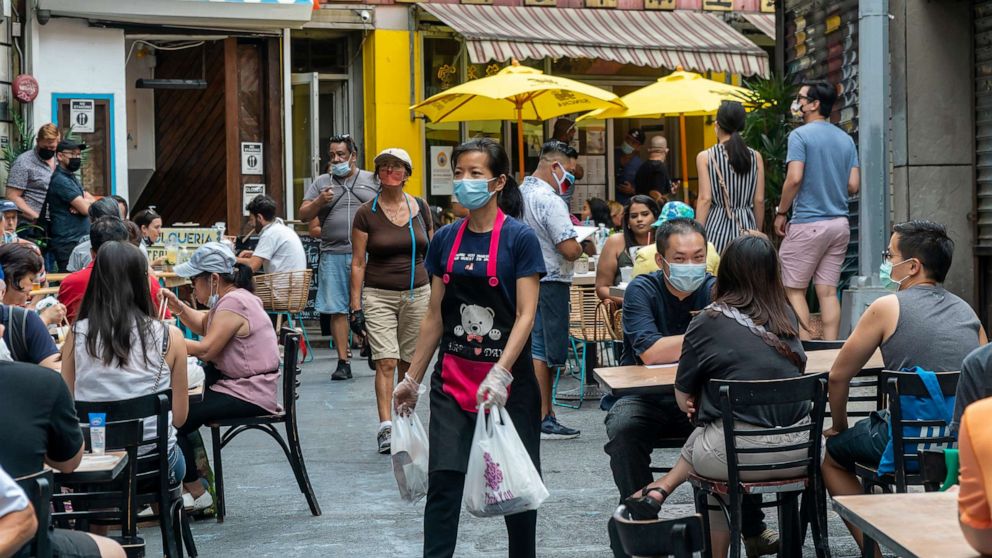 For many in the Chinese American community, WeChat is their only tether to friends and family both in the U.S. and thousands of miles away in China.

It is one of the few platforms in mainland China that can be accessed despite the nation’s internet firewall, making it the only way for many people in the U.S. to communicate with loved ones or conduct business in China.

In the U.S., it is also widely used within the Chinese American community for organizing church outings, sharing information and staying connected with fellow members of the Chinese diaspora.

But in just a few weeks, that link so many people rely on will likely be severed.

On Aug. 6, President Donald Trump announced a ban, via an executive order, on “any transaction that is related to WeChat by any person,” claiming the app was a threat to “national security, foreign policy, and economy of the United States.” The ban is expected to go into effect on Sept. 20.

WeChat has some 19 million users in the U.S., and a vast majority of them are people of Chinese descent.

“Most of the people that are using WeChat are people like me, the Chinese Americans,” Eric Gao, 28, who lives in the New York City area, told ABC News. “When Donald Trump says this is a national threat, everyone around me will think it’s people like me that are a threat. It’s isolating us from society in the United States.”

The ban also comes at a time of heightened tensions between the Trump administration and Beijing as the two largest economies spar over trade. Some Chinese Americans say they felt the sudden and sweeping ban that cuts off their main source of communication with each other was rooted in xenophobia, especially as Trump repeatedly uses the racist term “China virus” to refer to the coronavirus.

“I think what Trump is trying to do is demonizing China and the Chinese people here, because the tricky part for us is that non-Chinese people, they see us and they can’t tell if we are Chinese American or Chinese,” he added.

“When he says ‘China virus,’ his supporters, they don’t care, they listen to it and they see a Chinese person on the street and say, ‘This is the virus,'” Gao said. “This is the type of activity that we have to fight against.”

Gao said he has been using WeChat since 2011, and is on there every day. Without WeChat, Gao said he would have no way to contact most of his friends and family back in China, and is especially worried about losing communication with his aging grandparents.

It also helped him build a community here in the U.S., he said.

Gao is now spending his time volunteering for the nonprofit U.S. WeChat Users Alliance, which has filed a lawsuit against Trump over the ban.

The lawsuit, filed by a group of people who say they rely on the app for business and personal reasons, argues the executive order violates First Amendment free speech rights. It also claims there was no due process and the ban targets Chinese communities. The lawsuit seeks a preliminary injunction to block the order.

Gao said like all social media platforms, WeChat has “imperfections,” but an all-out ban will hurt the everyday people who rely on it the most and seems unfair given the litany of issues U.S.-based social media giants have accumulated in recent years.

“I feel like this WeChat ban is not only just a ban, it’s part of Donald Trump’s agenda targeting and demonizing the Chinese people here in the United States,” Gao said. “I feel like it’s the right thing to do to stand up and fight against this.”

Qiang Bjornbak, a Chinese American attorney from Los Angeles, said that she relies on WeChat for her business and communicating with clients. She argues that a ban won’t just hurt Chinese Americans, “it’s a harm to the U.S. economy as well.”

“WeChat is like internet and electricity in my home, I just cannot live a day without it,” she said. “I depend on it.”

“I have right around 5,800 contacts on WeChat. If I need to promote business, I just promote things on ‘Moments,'” she said, referring to a sharing function of the app that she says no competitor currently offers at the same level.

“Most of my clients are from mainland China, so it’s just not practical to use the other platforms such as Facebook and LinkedIn and Line,” she added. “They cannot use those.”

When the ban was announced, she said she tried to switch a WeChat group she was in with more than 280 members to an alternative app, but was only able to get “14 or 15” people to join the new group because of the firewall and tech issues.

Bjornbak is not alone in her concerns. The American Chamber of Commerce in Shanghai, a nonprofit, nonpartisan business organization with more than 1,400 members, including major U.S. corporations, released a survey Wednesday that found “an overwhelming percentage of respondents” said the ban would hurt competitiveness and revenue.

Like Gao, Bjornbak said she also uses WeChat to stay connected with her community in the U.S., especially for organizing church events.

Moreover, Bjornbak said that WeChat is the only way for her to talk on the phone with relatives in China for free (through WiFi).

“They got rid of all these landlines and stuff, the only way that you can talk for free for a long time internationally is through WeChat,” she said. “I used to call them through phone cards, but the phone cards just disappeared from the market in California because nobody uses them anymore.”

She said she is trying to stay neutral politically, but she “obviously” feels this ban is “targeted to the Chinese Americans, to give us a hard time to conduct our normal life and business.”

“I’m not an expert, but my impression is that all these apps have shortcomings, every platform has shortcomings,” she said. “Put regulations in to make them do the right thing rather than ban them totally.”

Gold, silver prices on the decline

Tesla’s stock price has skyrocketed. Is there a catch?