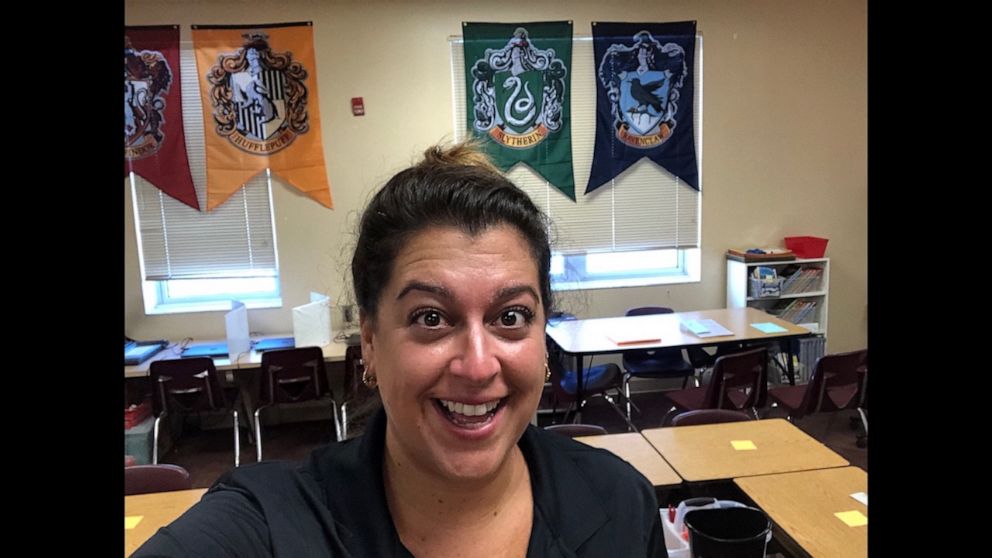 Meghan Hanrahan, a fourth grade math teacher in Orlando, Florida, returned to in-person classes last Friday. She said she knows if any of her students get COVID-19, she’ll get it too.

“I look at a student who is just looking through me. I can tell … he’s not understanding and I’m not going to let him struggle,” she told ABC News’ “Start Here.” “I’m going to go over to him and help him and manipulate his hand … on a place value chart, for example, and show him these things. … You can’t do that without really touching or being in contact with their belongings.”

Hanrahan, who spoke with ABC News in July, said older teachers told her they were organizing their wills in preparation for a return to in-person schooling.

“That should not be something that we would have to think of as a back-to-school chore,” she said in the interview.

“We’ve already been asked as teachers to basically jump in front of bullets in the case of an assailant,” she added. “I’m also going to take on the responsibility of protecting the health of your kid … the thought of going back to school triggers a hundred other thoughts that there are no solutions to.”

This week, she’s adjusting to an entirely foreign routine.

Normally set up in rotating pods, her 12 students are now spaced about 3 feet from each other, their desks staggered forward and backward. Hanrahan normally keeps a bin of sharpened pencils available for her students, but now she stocks mechanical pencils so her students won’t share the communal sharpener.

“When we break for lunch and recess, I wipe down the desks and the chairs, even though the same student is coming back to the same desk and chair. I clean up my area,” she said. “The custodial staff cleans the doorknobs and the doors and the commonly touched things every day. The students get hand sanitizer any time they leave or enter the room — the school building, the cafeteria, anything. I’ve gone through half a bottle of hand sanitizer in [the] few days that we’ve been back face-to-face already.”

While students’ families have been told that wearing masks at school is mandatory, Hanrahan says it’s a difficult policy to enforce.

“Once they are in a larger group, for example, at recess … they can take it off, but they have to be spaced out,” she explained. “You know, right when you get outside, we’re in central Florida in August. So they’re pretty warm. They take off their mask and then, you know, they’re just magnets. They’re children.”

Hanrahan said despite the new policies, preparations in her community were left until the last moment. She said she believes the school ultimately will return to virtual learning.

“I think time has greatly been wasted. This was happening all summer. All summer, we knew that school was supposed to start at this time in August,” she said. “How some counties could figure [out] how to give their teachers two weeks worth of planning, but Orange County couldn’t? … I think there was poor planning. Yes, big time.”

Even a month ago, Hanrahan told ABC News these conversations were being had too late.

“We are too late to even be asking any of these questions,” she said in July. “Things should have been decided long ago to give teachers, parents, families, administration plenty of time to actually try and find solutions to all of these problems.”

Hanrahan said she’s “so not” comfortable with in-person teaching. When asked by her principal, she said she preferred virtual teaching but was told to report to class anyway.

“I told my parents who live in South Florida … hopefully, maybe, I’ll see them Thanksgiving or Christmas. I just don’t feel comfortable after being exposed to my students and the other staff members at school to then, you know, see them,” she said. “[It’s] a sacrifice that I, you know, am basically forced to make.”