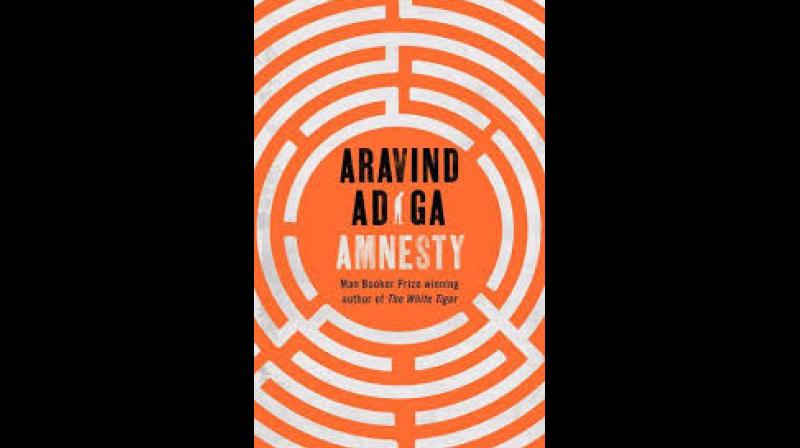 In Aravind Adiga’s tense, bruising new novel, Amnesty, the most physically striking thing about the protagonist Danny, short for Dhananjaya Rajaratnam, is the blond highlights in his hair. Or so he imagines, with his own attention often drawn to his coloured hair to consider the ways in which it presents him to the world and makes him stand out.

But Danny is trying hard to fit in, to be less visible, by adopting distinctly Australian ways, to master the Australian tongue, to say “I reckon” generously and tie his sentences with “ridiculous” at the end. He slips up occasionally and immediately fears the consequences, for he has plenty to lose. Danny is a Sri Lankan immigrant working as a “legendary” cleaner in Sydney, with a loyal clientele thanks to his careful, efficient housecleaning skills. But his secret is this: he came to Australia on a student visa four years ago, dropped out of the college that turned out to be more a racket than education, and with refugee status denied, is now living in the country illegally. He’s at the mercy of a grocery store owner who knows his vulnerable status and allows him to live in the backroom of his shop as long as he gets a cut of his pay.

The suspenseful, often breathless, novel unfolds over a day, with events in the present packed into the precise brackets of a ticking clock. At 8.46 am, Danny has a seat by the window in the train, running his fingers through his golden hair, tensing when he feels someone watching him. By 9.47 am, as Danny goes about his day cleaning homes, he hears there’s been a murder, and the victim was one of his clients, Radha Thomas. And if he’s to be perfectly honest, the murderer, too, is likely one of his clients, who was having an affair with Radha. Danny should be calling the police, telling them what he knows. But if he does make the call, he is sure to get deported, and worse.

By 11.43 am, Danny is having uncomfortable phone chats with the client he suspects to be the murderer, and a strange, eerie cat-and-mouse game begins. Meanwhile, detailed flashbacks take us to Danny’s past: his early years in Sydney and the struggles back home in Sri Lanka, and this is where the novel derails, slowing down, loosely written, but mercifully pulled back to the tracks as it races to the finish.

This sharply observed immigrant story hinges on that time-tested, devastating moral question: should you save yourself or do the right thing? This choice acquires even graver tones given Danny’s situation living on the margins. The White Tiger author is obviously intensely invested in telling the underdog story several times over, but it is his ability at being able to tell them afresh from varied angles operating within entirely different universes that shines. Sydney as it swings between the lives of those who are made to belong and those who don't is acutely captured through Danny's eyes. As Amnesty’s narrative dives deeper into the toxic, exploitative nature of Danny’s association with Radha and her lover, whose messy affair Danny becomes an unwitting witness to, Adiga craftily peels away the psychology of a man in search of his rightful place in the world, a man frequently mocked even by those his own colour as he maintains a powerful dignity.

As Danny tastes the difference between living as a minority in Sydney, with a steady Vietnamese girlfriend, Sonja, versus his life back in the mysterious, lagoon-lined Batticaloa in Sri Lanka with its stories of singing fish and mermaids, he wrestles with the affliction of a deep dichotomy. Adiga’s novel feels pertinent and timely in a moment when the immigrant experience has become the story of our time, and how it’s told and who tells it is in question.

There is no doubt that in Amnesty, Danny’s uniquely magnetic, sharply witty voice is doing the telling. Adiga gets under his skin and inhabits the city as he would, a city Danny views as divided in two kinds of suburbs, “thick bum” and “thin bum” — the former occupied by the working class, the latter by the thin, fit, rich youngsters who get their homes cleaned by people like Danny. For his survival, Danny is at the mercy of others, in a matter of universal social injustice. But when it’s in his power to bring justice to another, he is once again made powerless by the system. By 2.46 pm, the detective from Homicide is on call with him, asking what he knows. How much should he tell?

There is a difference, believes Danny, between him and the other illegals. “For them, shame was an atmospheric force, pressing down from the outside; in him, it bubbled up from within. Even if I were granted citizenship in this country, I would still be ashamed of myself.” By 7 pm, Danny would perhaps see himself a little differently. The reason Amnesty works is because it has a golden heart, like the tips of Danny’s hair. And a hero who isn’t invisible at all.

Neha Bhatt is an independent journalist and book critic based in Delhi. She tweets @nehabhatt70 and @bookishbadish on insta

The changing face of Irish whisky

Georgia ‘Toff’ Toffolo: I’m not a vacuous TV star who’s had a bit of luck