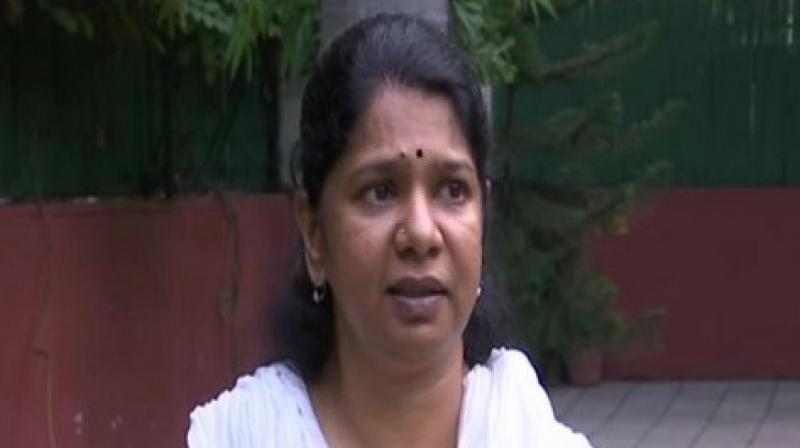 DMK MP Kanimozhi Karunanidhi wrote to Minister of State (Independent Charge) for AYUSH, Shripad Yesso Naik urging him to immediately order an inquiry into the incident of "Hindi imposition" during a virtual training event conducted by his ministry and take actions against all officials who have acted in a manner "discriminating our fellow citizens on the basis of language".

"I write this letter to bring to your attention an incident of the imposition of Hindi, in violation of our constitutional principles, which has taken place during a virtual training event/webinar conducted by the Union Ministry of AYUSH," read the letter by Kanimozhi.

"During the event, it has been reported that the Union Secretary to the Government, Ministry of AYUSH, has told non-Hindi speaking participants to leave the meeting if they did not understand Hindi and continued to speak in Hindi," she added.

The DMK MP, seeking an inquiry into the matter, claimed that the issue has been reported in various newspapers and the video has surfaced in Social Media, where the Secretary's remarks can be heard clearly.

"I urge you to immediately order an inquiry into the abovementioned incident and take actions against all officials who have acted in a manner discriminating our fellow citizens on the basis of language. Furthermore, I urge you to direct the officials in your ministry to make sure that all the official events are conducted in English and wherever Hindi is used, corresponding translation in English be provided for the same," the letter said.
Kanimozhi also pointed out that Hindi and English are official languages of the Union and there is 22 languages list as Official Languages in the Eighth Schedule to the Constitution.

"Further, I would like to remind you about the promise made by the then Prime Minister Jawaharlal Nehru on 7th August 1959 on the floor of the Lok Sabha that as long as the non-Hindi speaking states require English as an associate language, it will continue for an indefinite period," she stated.

Earlier this month, Kanimozhi alleged that an official had asked her at the airport whether she was an Indian as she could not speak Hindi.

"Today at the airport a CISF officer asked me if "I am an Indian" when I asked her to speak to me in Tamil or English as I did not know Hindi. I would like to know from when being Indian is equal to knowing Hindi," she posted on her tweet along with the hashtag #hindiimposition.