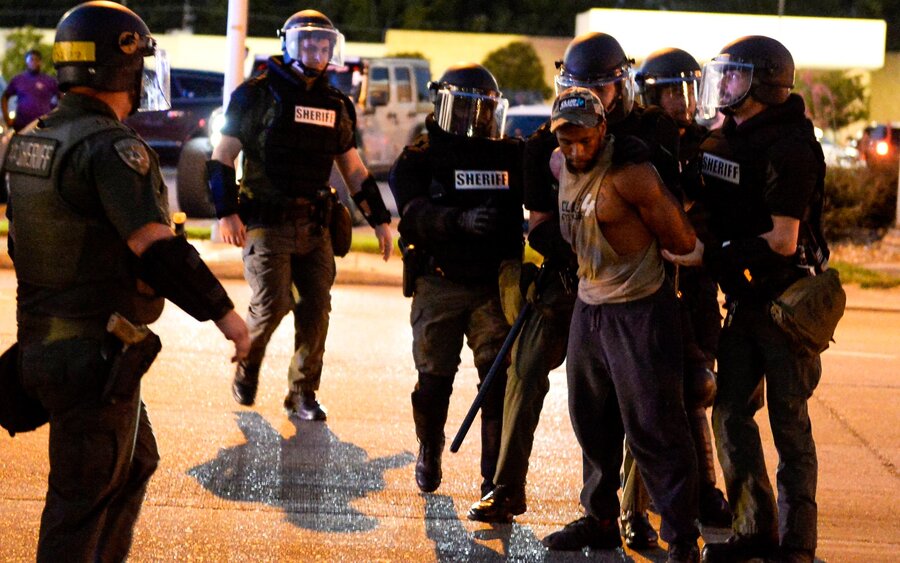 Police in the southeastern Wisconsin city of Kenosha shot and wounded a Black man, apparently in the back, after responding to a call about a domestic dispute, setting off a night of protests and unrest in which officers fired tear gas and demonstrators apparently hurled objects and set fire to parked cars.

Democratic Gov. Tony Evers promptly condemned the shooting Sunday of Jacob Blake, who was hospitalized in serious condition after he was gunned down in front of his three children as he leaned over into his SUV.

Police in the former auto manufacturing center of 100,000 people midway between Milwaukee and Chicago did not immediately disclose the race of the three officers at the scene or say whether Mr. Blake was armed, and they released no details on the domestic dispute.

The officers were placed on administrative leave, standard practice in a shooting by police, while the state Justice Department investigates.

The shooting happened at around 5 p.m. and was captured from across the street on cellphone video that was posted online.

In the footage, Mr. Blake walks from the sidewalk around the front of his SUV to his driver-side door as officers follow him with their guns pointed and shout at him. As Mr. Blake opens the door and leans into the SUV, an officer grabs his shirt from behind and opens fire while Mr. Blake has his back turned.

Seven shots can be heard, though it isn’t clear how many struck Mr. Blake or how many of the officers fired. During the shooting, a Black woman can be seen screaming in the street and jumping up and down.

“While we do not have all of the details yet,” the governor said in a statement, “what we know for certain is that he is not the first Black man or person to have been shot or injured or mercilessly killed at the hands of individuals in law enforcement in our state or our country.”

Mr. Evers indicated he intends to take further action over the shooting.

“I have said all along that although we must offer our empathy, equally important is our action,” the governor said. “In the coming days, we will demand just that of elected officials in our state who have failed to recognize the racism in our state and our country for far too long.”

“As always, the video currently circulating does not capture all the intricacies of a highly dynamic incident,” Mr. Deates said in a statement. “We ask that you withhold from passing judgment until all the facts are known and released.”

In the unrest that followed Sunday night, social media posts showed neighbors gathering in the surrounding streets and shouting at police. Some could be heard chanting, “No justice, no peace!” Others appeared to throw objects at officers and damage police vehicles.

In a scene that mirrored the widespread protests over the police shootings of George Floyd, Breonna Taylor, and other Black people, marchers headed to the Kenosha County Public Safety Building, which houses the police and sheriff’s departments. Authorities mostly blocked off the building, which was closed on Monday because of damage, authorities said.

Laquisha Booker, who is Mr. Blake’s partner, told NBC’s Milwaukee affiliate, WTMJ-TV, that she and Mr. Blake’s three children were in the back seat of the SUV when police shot him.

“That man just literally grabbed him by his shirt and looked the other way and was just shooting him. With the kids in the back screaming. Screaming,” Ms. Booker said.

Elsewhere in the United States, protesters marched through a Louisiana city holding signs and blocking traffic in response to the fatal police shooting of a Black man that has heightened tensions between community activists and local leaders.

The march Sunday followed an event at Lafayette City Hall where protesters demanded justice after the killing of Trayford Pellerin Friday night. Activists insisted that the demonstrators remain peaceful, a day after protests ended with fires set on a highway median and police clearing the crowd with smoke canisters.

“No rioting, no burning buildings, no damage to vehicles, no assaulting of people,” community activist Jamal Taylor said during the rally livestreamed on his Facebook page. He said the dead man’s mother, Michelle Pellerin, told him she wants her son’s memory respected with peaceful protests.

The video showed what appeared to be 100 to 200 people at the event. Some then marched to a spot near the gas station where Mr. Pellerin was shot, and images appeared to show at least one person being detained. It was unclear whether any arrests were made.
Mr. Pellerin’s aunt and grandmother said they arrived on the shooting scene by chance Friday night, as they drove home from a day out.

Police have said Mr. Pellerin was carrying a knife and was shot when he tried to enter one convenience store in Lafayette after causing a disturbance at another.

“We understand it was a call for loitering,” said civil rights attorney Ben Crump, who is representing the family with attorney Ron Haley of Baton Rouge.

Mr. Crump and Mr. Haley, who joined Trayford Pellerin’s aunt and mother on the conference call interview, said that less than three weeks earlier, Lafayette police simply arrested a white man who had a knife and had led a car chase. Police said Donald Guidry, of Rayne, had told officers he was armed and might harm himself, but was talked into surrendering without incident, according to several news reports.

“There are two justice systems in America. One for Black Americans and one for white Americans,” Mr. Crump said. “Until we address this we will continue to see more hashtags” about Black people killed by police, he said.

Both the ACLU and the Southern Poverty Law Center quickly called for an investigation.

Throughout the weekend, local activists criticized how authorities responded to Mr. Pellerin’s shooting death and the protests that followed. Mr. Taylor, who spoke at Sunday’s rally at city hall, blamed outside agitators for the violence that erupted Saturday. He told the AP that he did not recognize people shown in videos setting fires.

Mr. Taylor said an earlier decision to close parks and recreation centers – most of them in Black neighborhoods – and a statement by Mr. Guillory about Mr. Pellerin’s death indicate “a person disconnected from the plight of the Black man, from the person of color who is fighting to be equal and have his life valued the same as a white person’s life is valued,” he said.