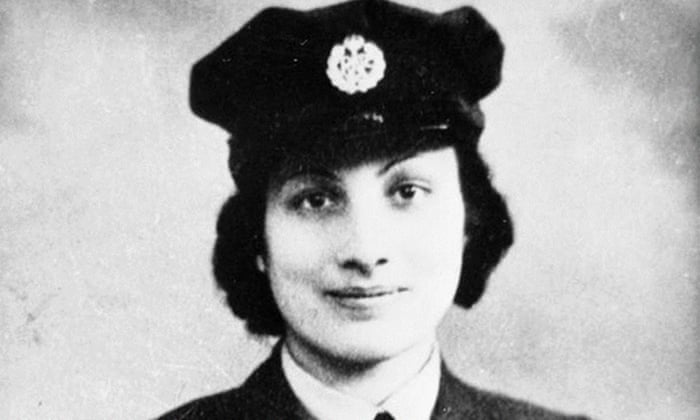 A spy who operated in occupied France for months during the second world war before being captured by the Gestapo and later executed has become the first woman of south Asian descent to be given a blue plaque in London.

Noor Inayat Khan received the George Cross for her exploits in Paris, where she volunteered as a radio operator, and now her former family home in Bloomsbury has been recognised by English Heritage after first being nominated 14 years ago.

The award came after work by a group that was set up in 2016 to address the lack of diversity in the scheme. When the working group began, only 33 of the more than 900 plaques were dedicated to black and Asian figures. Even now, only about 14% celebrate women.

Anna Eavis, the curatorial director of English Heritage, said it was vital that a more diverse selection of blue plaques were awarded, but they still needed more public nominations for people of colour in order to address the racial imbalance.

“The continuing diversity of London’s population means that it is very important that public-realm schemes like this are more representative and tell the whole story,” Eavis said.

Khan’s biographer, Shrabani Basu, said the spy – who went by the codename Madeleine – was also a talented musician and a published children’s author before becoming an unlikely candidate for Britain’s “first Muslim war heroine in Europe”.

Basu said: “She was fluent in French, she knew the area, and she was a brilliant radio operator. So she went in under cover behind enemy lines and she worked there for three months setting up crucial links and sending information back to London.”

Born in Russia to an Indian father and an American mother, Khan was a descendant of Tipu Sultan, the 18th-century Muslim ruler of Mysore, and spent the majority of her life in France. The country posthumously awarded her the French Croix de Guerre for her efforts behind enemy lines. “She’s highly decorated, but her story was forgotten,” said Basu.

Khan came to Britain with her family after France fell in November 1940. She became the first female radio operator and was sent into Nazi-occupied France by the Special Operations Executive. She was originally thought not best suited to life in the field because she was considered a “dreamer” and her superiors feared that her Sufi faith might mean she lacked a ruthless edge.

Basu said Khan’s allegiance to Britain was also questioned because of her family’s strong links to the Indian independence movement. But despite the doubts and dangers – radio operators were expected to last only six weeks in the field because it was so difficult – Khan worked successfully for three months and was only captured by the Gestapo after being betrayed.

She was kept in Pforzheim prison before being moved to Dachau concentration camp where she was executed in 1944.

English Heritage plans to unveil nine plaques rather than the usual 12 this year, with other awardees including Christine Granville, another secret agent of the second world war, the artist Barbara Hepworth, and the African slavery abolitionist Ottobah Cugoano. The Covid-19 pandemic means the unveiling ceremony will take place on Facebook.